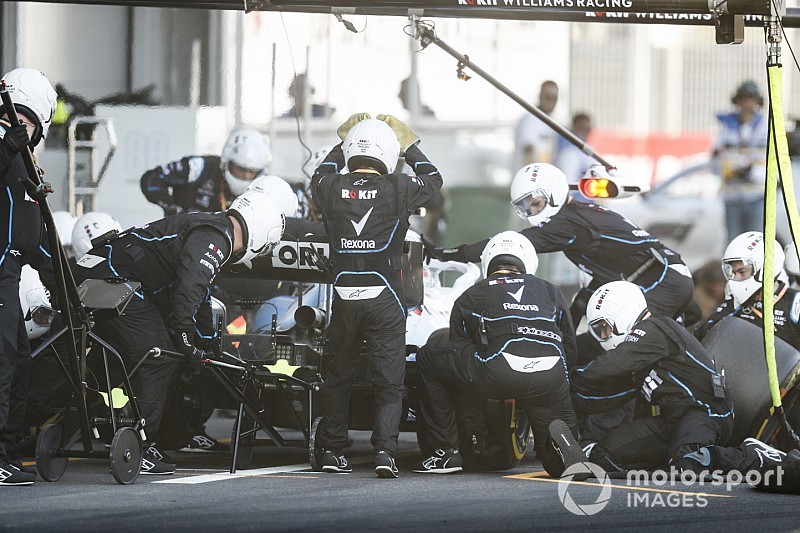 George Russell says Williams' impressive effort in delivering another fastest pitstop of the year is important for proving the outfit "are not idiots" despite their competitive situation.

Although the team has faced a difficult start to the campaign, as it bids to find improvements that can lift it off the back of the grid, it has not let its situation affect its desire to shine in other areas.

That has included a run of impressive pitstop performance, including the tally of having the top three fastest stops of the 2019 season.

This included a stunning 1.97 seconds stop for Robert Kubica at the French Grand Prix.

For Russell, who is in his rookie season, the way that Williams has shone in the pitstops is proof to him about the qualities that the team has.

"Obviously a Formula 1 team is a huge structure and the fact is that every single person who comes to the racetrack, whether it's for Williams, Mercedes or whoever - their job is to maximise what they're given," said Russell, when asked by Motorsport.com about the pitstop pace.

"They're not the designers or the aerodynamicists, so regardless of whether you're fighting for first position or last position they still have the motivation to show that they're the best on the grid let's say.

"Definitely for the mechanics, it could be easy for them to sit back and think that we're not racing for anything, but it's important to show that we're not a bunch of idiots even though it's not going well at the moment.

"There's a reason it's not going well at the moment. There's been a big philosophy change from last year and quite often you have to take three steps back to make one step forward. We're still in the steps backwards phase but we are trying to make the steps forward."

Russell says that knowing his team are doing well in pitstops is also good for motivation in showing that the team is ready to make the most of any progress it can make with the car.

"The positive thing for us and what's also motivating for myself and the team at the track is that the team have a long-term vision and it's all well and good looking short-term and trying to get the results here and now, but if it means you're going to be in a difficult position next year or years down the line, you need to build those foundations to sustain a good level. That's what we're in the process of doing."

Robert Kubica is well aware that the situation is not easy for Williams, but he also understands that the team must not sit back in any area while its car is not performing.

"I think the guys are doing a good job and they have always been very strong," he said about the pitstops.

"It's not that it's been easy for them, we do have our problems, and for the [pitstop] guys they have their own race in there. I assume if I would be on a pit crew it would be a kind of satisfaction for me [to do fastest stop] and for sure it's something positive and we can publish something positive as well.

"But when you finish three minutes behind...racing is about finishing the race as fast as you can. The pitstop is one of the processes where you have to be good. But when you are so behind, at least we have something which is positive, which is good. But we have to work on other stuff. "