George Russell said it was a “strange feeling” to make his return to Mercedes in Formula 1 post-season testing ahead of racing full-time for the team next year.

Russell featured in both days of the post-season running at the Yas Marina Circuit this week, driving a modified Mercedes W10 from 2019 to sample Pirelli’s 18-inch tyres for 2022.

It marked Russell’s first outing for Mercedes since his stand-in appearance for Lewis Hamilton at the 2020 Sakhir Grand Prix, when he came close to winning on debut for the team.

Mercedes announced in September that Russell would be joining full-time for 2022, stepping up after three years with Williams to replace the outgoing Valtteri Bottas.

“It’s a strange feeling, because I’ve tested with the team numerous times after races, end of season, and here we are again,” Russell said after his first day of testing in Abu Dhabi.

“But obviously it’s my first time as an official driver for the team. It was a really great day to be back with the guys, and learning about the new tyres.

“It’s always a pleasant experience driving a world championship-winning car, the 2019 Mercedes, and with these 18-inch Pirellis, which seem to be reacting pretty positively. It was a nice day.” 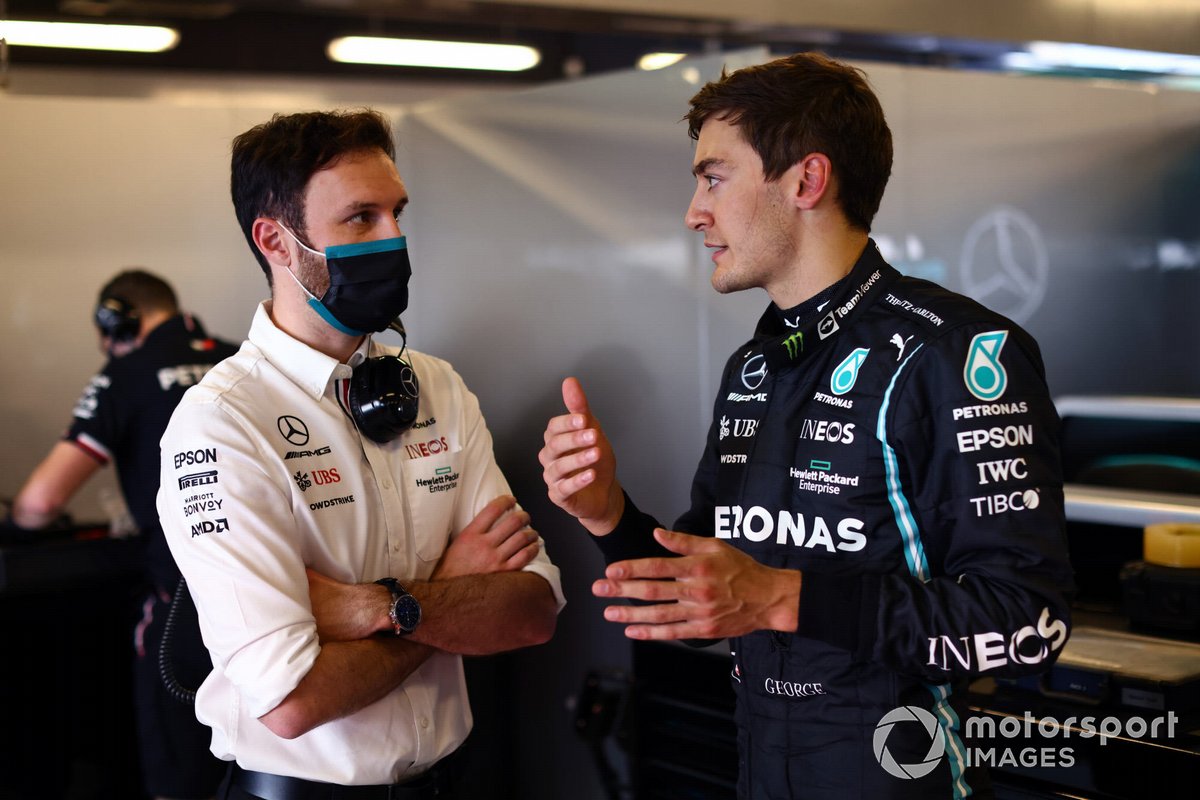 Teams were permitted to field their modified mule cars on both days of testing in Abu Dhabi, giving them a chance to get to grips with the new tyres, which are part of the overhaul of the technical regulations for 2022.

The new 18-inch tyres are a marked change from the current 13-inch tyres, with smaller sidewalls giving them different characteristics.

“It felt pretty nice to drive, to be honest,” Russell said of the new 18-inch tyre.

“It’s going to be very different next year, as the cars are going to be drastically changed compared to these current cars. So there’s not an awful lot you can take away from it.

“Nevertheless, they do react pretty differently to the 13-inch tyres that we’ve raced on previously.

“Let’s hope that carries through to next year and see how they react with the new regulations.”

One struggle Russell faced when he replaced Hamilton in Sakhir last year was fitting in the cockpit, forcing him to wear race boots one size too small to get his feet inside.

Russell joked he was “a bit battered and bruised” after driving the modified 2019 car on Tuesday in Abu Dhabi.

“It’s pretty damn tight in that car, but next year will be much better and I’ll have a bit more room to breathe,” he said.

“I’m looking forward to that. But you suck it up, get on with it, and I’ve got all of Christmas to recover.”