George Russell is uncertain that the inaugural Formula 1 sprint race at Silverstone next weekend will play to Williams’ advantage, but hopes the new format could still provide an “opportunity”.

The British Grand Prix will mark the first running of F1’s new weekend format that will see a 100km race take place on Saturday afternoon in the normal qualifying slot.

The traditional qualifying format will be used for a session on Friday afternoon to set the grid for the sprint race, the result of which will then form the final starting order for the grand prix on Sunday.

Sprint races will take place at three grands prix in 2021 as part of a trial by F1 that could be expanded for the future depending on its success.

A capacity crowd is set to be welcomed to Silverstone next weekend thanks to the race’s addition to the UK government’s Event Research Programme, with a bumper crowd of 140,000 expected for race day.

While Russell was relishing the opportunity to race in front of his home crowd for only the second time - last year’s British Grand Prix took place behind closed doors - he felt the sprint race may not work in Williams’ favour given it has been weaker on Sundays than Saturdays.

“Silverstone's going to be an even bigger crowd [than Austria] and I'm sure they're going to be buzzing for it - probably after England have won the Euros as well, so they're going to be happy about that,” Russell said. “Obviously, there’s the sprint qualifying as well. I'm not too sure that will play into our favour, because obviously we're normally a bit better on the quali performance than we are in the race.

“But we've got to give it a chance and maybe it goes the other way. It's new for everybody, and that also gives an opportunity.” 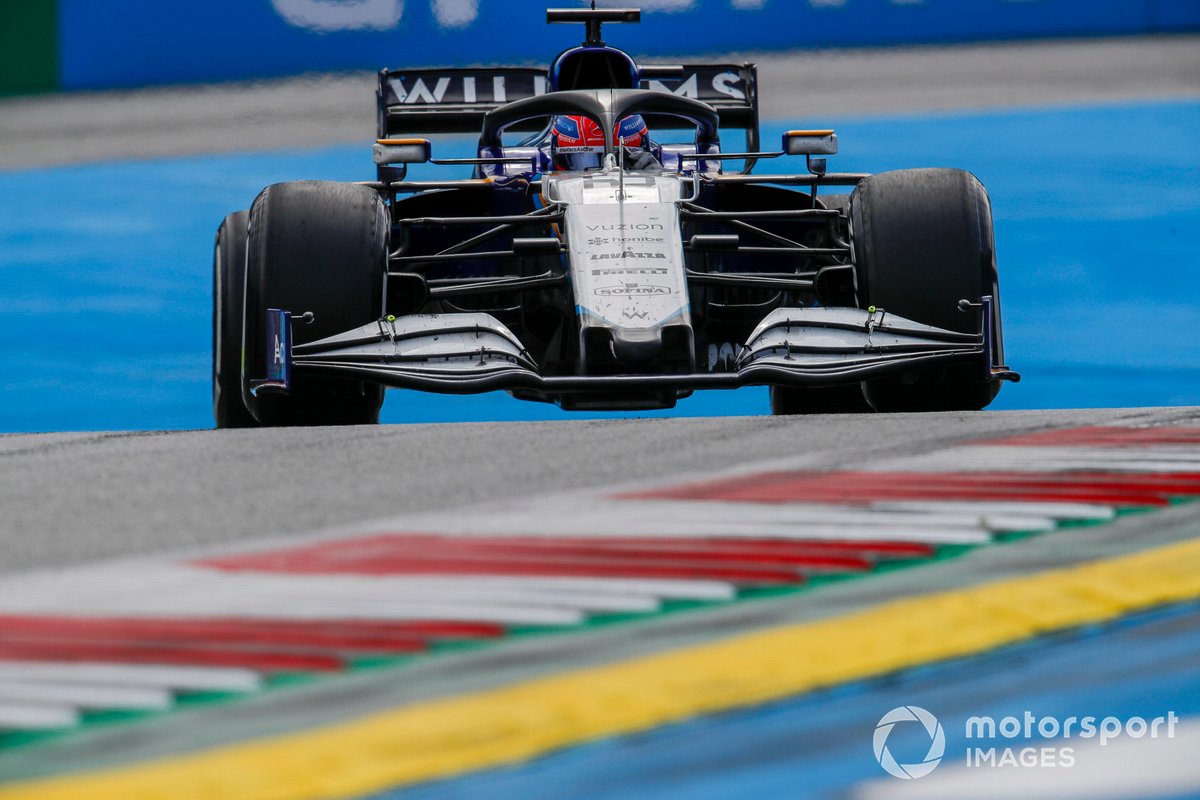 Russell led Williams into Q3 for the first time since the 2018 Italian Grand Prix in Austria last weekend, starting the race from eighth place on the grid.

He had managed to qualify 11th one week earlier and was again in the running for points until a power unit issue forced him to retire from the race.

Russell said after the second race at the Red Bull Ring that he took “massive” confidence from the team’s performances in Austria, believing Williams was currently maximising the FW43B package.

“I feel so at one with the car and the team at the moment, and we're really getting everything out of the package, which I think is so important,” Russell said. “Especially on a Saturday, the pressure's on, if you make one small mistake you're penalised and it shows obviously in the course of the race. Everybody gets into a rhythm and that true pace comes out.

“We're all doing a really good job and it's so close. P12 in France, P8 last week before we retired, P11 today - all of which every single top team and car finished."