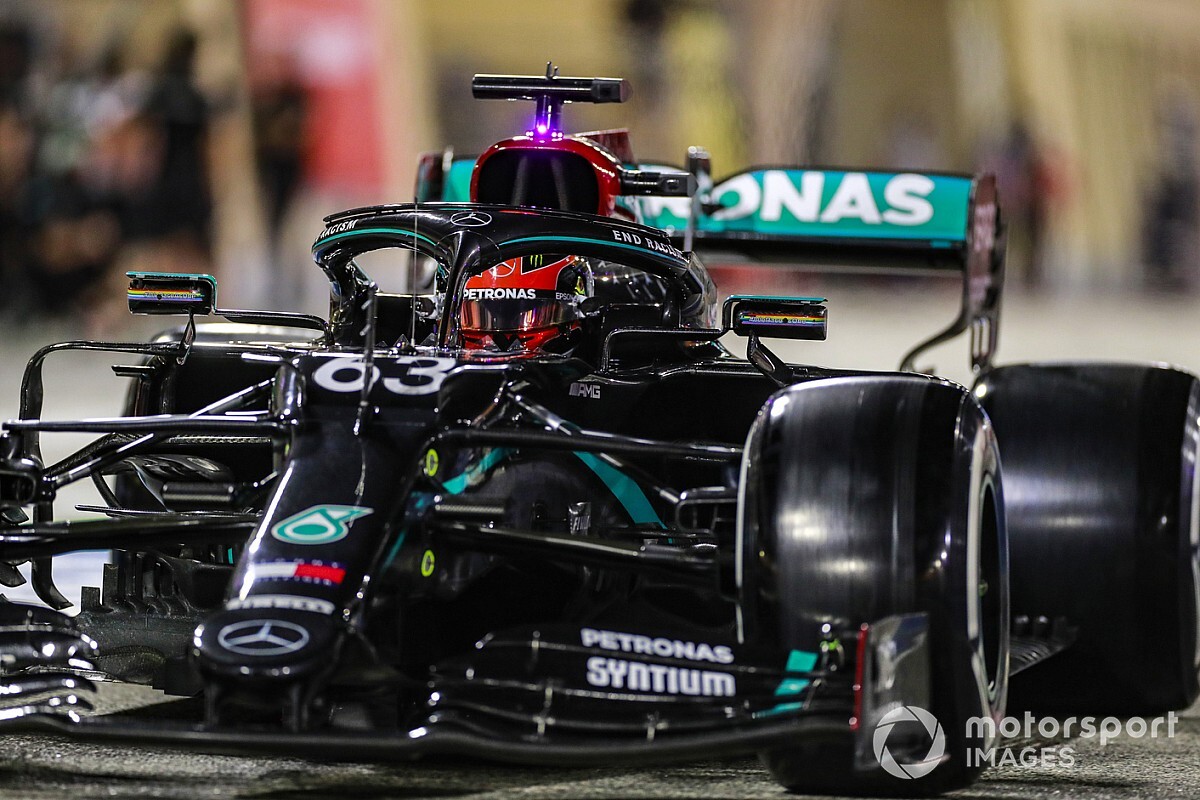 George Russell has downplayed his sweep of Friday's Formula 1 practice sessions for the Sakhir Grand Prix, saying the laptimes are "a little bit deceiving".

On his first outing in the Mercedes W11 car ahead of his stand-in appearance in place of Lewis Hamilton, Williams regular Russell was able to set the fastest time in both practice sessions on Friday.

Russell finished three tenths of a second clear of Mercedes teammate Valtteri Bottas in FP1 as Bottas struggled with a damaged floor.

Russell then followed this up by topping the timesheets again in FP2, albeit only after Bottas had his faster laptime deleted due to exceeding track limits at Turn 8, dropping the Finn to 11th place.

But Russell moved to downplay the results in the wake of the session, revealing that he struggled more across the race simulation runs.

"I do think the laptimes are a little bit deceiving at the moment, and aren't a true representation of the pace," Russell said.

"I thought FP2 was not a great session for me. I struggled, especially in the high fuel, and ultimately that's going to be the key on Sunday.

"[I've] still got a lot of work to do to get comfortable in the car, get comfortable with the set-up, make some improvements, because I think tomorrow is going to be a different story."

Russell thought that Bottas was still outright faster than him, believing the amount of time he gained by running wide at Turn 8 was minimal.

"Just because I was quickest today, doesn't mean that's where I'm going to be tomorrow," Russell said.

"[Max] Verstappen was incredibly quick in the long runs, Valtteri was quickest in FP2, but he got his lap deleted.

"He probably only gained half a tenth in all honesty, so I'm probably a good tenth-and-a-half behind Valtteri in the low fuel. But we'll see. We're getting better."

Bottas called his Friday in Bahrain "tricky", explaining how his running in first practice had been compromised by his floor breaking and that he had not shown a representative time on the softs in FP2.

"In the first session in the first run, I broke the floor of the car, I went over the kerbs in Turn 8, so a big piece was missing," Bottas said.

"Then the rest of FP1 was a bit of a waste. FP2 felt quite okay. Obviously I didn't get any laps on the soft tyre, I had one half decent lap, but that was deleted for track limits.

"So not really the best day, but at least the long runs were pretty consistent, although Red Bull on the medium tyre looked pretty quick."

Russell was heard complaining about his seat during first practice, having revealed on Thursday that he was wearing one size smaller race boots than normal to fit into Hamilton's cockpit.

But he is confident the issues will be resolved in time for the 87-lap race on Sunday.

"I'm pretty battered and bruised already to be honest," Russell said. "We've already gone through what needs to change. It's not the work of a moment.

"[We're] changing the seat here and there, working hard with the guys to try and improve that for Sunday. But I'm sure it'll be fine."