Williams Formula 1 driver George Russell believes "motorsport has a lot to learn" from a chaotic Saudi Arabian Grand Prix and says its Jeddah's Corniche street circuit needs to be made safer.

Russell was eliminated from Sunday's race, which was red-flagged twice, after being smacked from behind by the Haas of Nikita Mazepin on lap 16, as the bunched up field streamed through the first sector following a restart.

Russell was taking avoiding action for Red Bull's out of control Sergio Perez, who was spun round by Ferrari driver Charles Leclerc.

The Briton just managed to slow down to avoid the Mexican, but behind him Mazepin was powerless to avoid hitting the back of the Williams through one of Jeddah's many blind sections.

While all drivers escaped without injuries, the type of accident was exactly what many drivers and observers were fearing due to the circuit's combination of extreme high speed, limited visibility and run-off areas.

According to Russell, the incident was "pretty inevitable" and believes the track is not safe enough to race on.

"It seemed pretty inevitable, you go around a Turn 2 that's fairly wide and open - cars can go side by side - and then it really funnels in and goes pretty narrow pretty fast," he told Motorsport.com right after his exit.

"I came around a blind corner, cars were everywhere, I slowed down and then got completely hit from behind.

"So, a lot to learn I think for motorsport this weekend, because it's an incredibly exhilarating and exciting track to drive but it's lacking a lot from a safety perspective and a racing perspective.

"And there are unnecessary incidents waiting to happen in all of these small kinks that are blind, which are not even corners in an F1 car, but they just offer unnecessary danger." 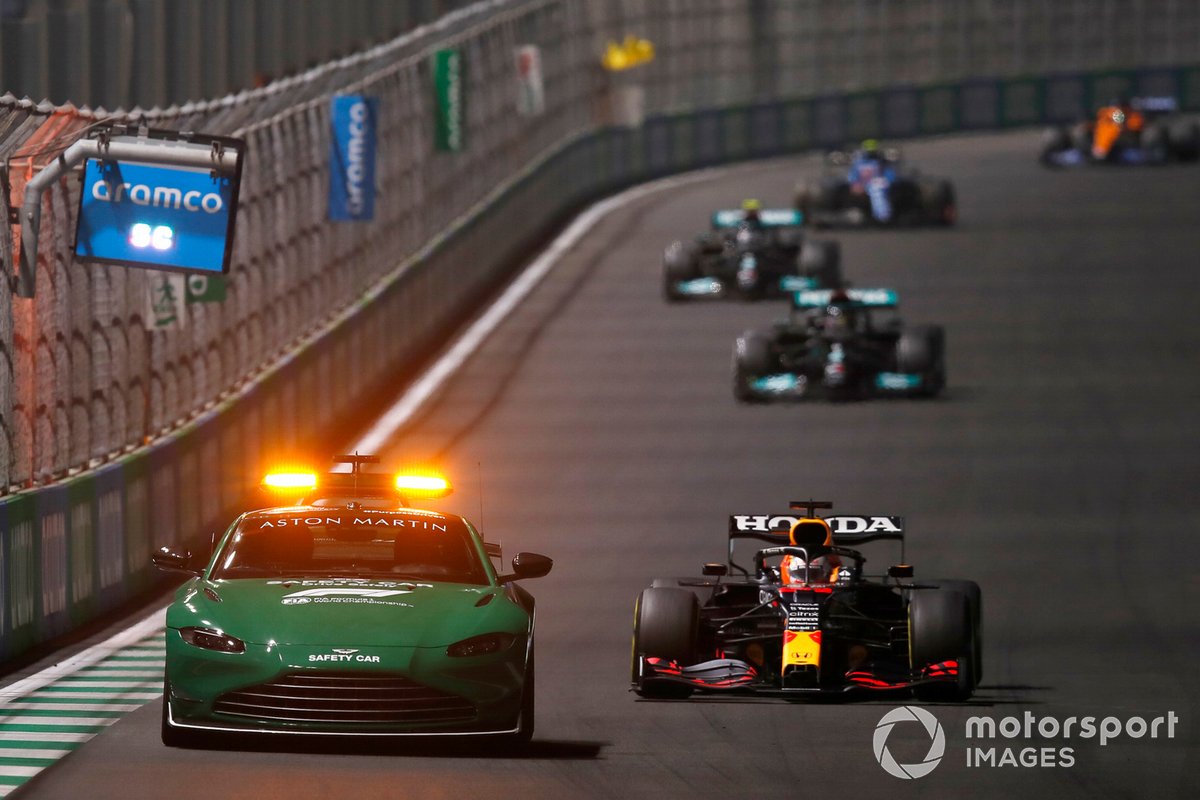 With Formula 1 due to revisit Jeddah in March next year, Russell hopes the organisers and the FIA will make the necessary changes to improve safety around the track.

He thinks a lot of "unnecessary risks" can be removed by straightening out some of the blink flat-out kinks.

"I think you live and learn from these experiences," he explained. "You can't blame anybody for trying to make an incredible racetrack and ultimately, that's what they achieved. But I think nobody foresaw what was about to happen with all of these blind corners.

"In my opinion, yeah, track changes are needed, you've got so many of these small kinks that are totally unnecessary.

"And that could all just be made into a straight line from Turn 2 to Turn 4 and just be straight from Turn 17 to 22. We've got five corners, which is a section which is totally easy flat out, even with the DRS.

"I don't know what the limitations are, that also needs to be looked at. And ideally, if that was made into a straight line the safety would drastically improve.

"I think they've got the resources to do it here, so it shouldn't be a limitation. Safety needs to come first.

"If you can improve the danger drastically with small changes, then it's a no brainer."

The collision between Russell and Mazepin happened after the race was red flagged a first time for a crash by the second Haas of Mick Schumacher on lap 13.