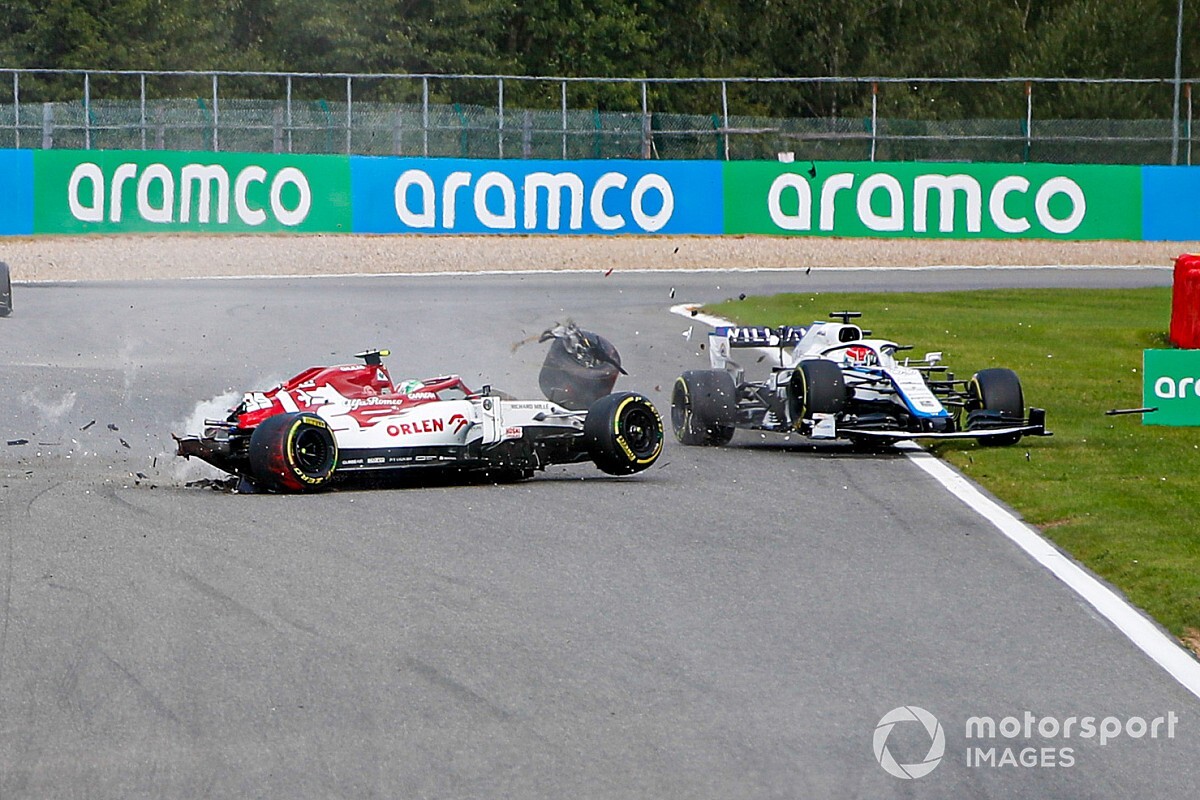 George Russell felt “very thankful” to have the halo on his Williams Formula 1 car after a “massive impact” with Antonio Giovinazzi’s loose wheel in Sunday’s Belgian Grand Prix.

Giovinazzi crashed at the exit of Les Fagnes on Lap 10 of the race, spinning into the barrier on the right-hand side of the track.

The Alfa Romeo car bounced back towards the racing line, forcing Russell to take evasive action and crash his Williams into the wall on the left-hand side of the track.

A loose wheel from Giovinazzi’s car hit the front-left wheel on Russell’s car during the collision, but both were able to get out of their cars unharmed.

The crash resulted in the safety car being deployed while the cars were removed and the debris strewn across the track was cleared, but there was no need for a red flag.

Speaking after returning to the paddock, Russell called the crash “very unlucky” and said there was “nowhere I could have gone” to avoid the collision.

The Williams driver also paid tribute to the halo cockpit protection on his car, saying it was quite scary to see an errant tyre coming towards him.

“If I went to the right, that’s where Antonio’s car was, and at the left side of the track, I had a massive impact with the tyre,” Russell said.

“But I have to say you feel much safer in the car now with the halo. When I saw this massive tyre coming towards me, it was quite scary to be honest.

“So I’m very thankful that we have this halo on the car right now.

Giovinazzi explained that he suffered with a snap of oversteer as he was exiting the corner, causing him to crash out.

“Unfortunately I had a snap of oversteer on the exit, nothing I could do,” Giovinazzi said.

“I'm just sorry for my team after what happened today. But I have to reset my mind right now for Italy.

“I feel really sorry for [Russell], as I destroyed his race as well. Really unfortunate what happened to him. I'm just sorry.”

Belgian GP: Hamilton cruises to win ahead of Bottas

Hamilton was "nervous" about repeat of tyre failure