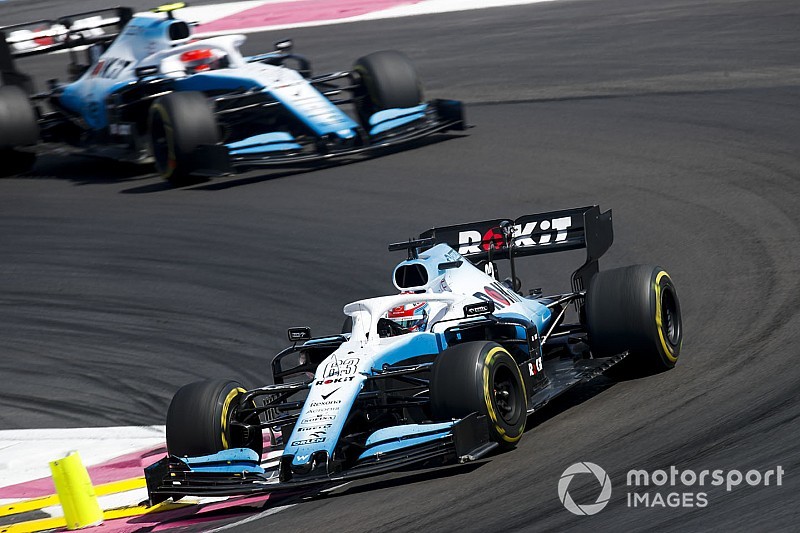 George Russell's damaged front wing meant he finished last in a Formula 1 race for the first time despite pulling off a superb unseen pass on Robert Kubica.

Russell ran wide trying to overtake Williams teammate Kubica around the outside at the fast Signes right-hander early in the French Grand Prix and hit a polystyrene board with the front left of his front wing.

Unseen to television viewers, he managed to get ahead of Kubica later on but the slight strike of the braking distance board eventually prompted a second pitstop and dropped him to the back.

The French GP has been criticised for its lack of action and the unseen Russell overtake was one of the best moments of the race.

Viewing Russell's onboard camera from the grand prix, which was not broadcast live or on a replay, shows him attack Kubica into the Mistral Straight chicane as the Pole defends the inside line.

Russell gets a better run exiting the corner and, 12 laps after his failed attempt at the same place, moves to the outside approaching Signes at around 190mph.

This time Russell makes the move stick, managing a minor wobble as he runs ultra-close to Kubica and holding the position on the exit of the corner.

He then radios to his team to exhale a brief "ooh" in acknowledgement of the move.

Russell, who stayed ahead of Kubica until a second pitstop to get a new front wing after mid-distance, later described the successful pass as "quite a hairy move but the highlight of my race".

"It was good fun," he said of his battle with Kubica. I told the team at the start I felt that I was quicker than him but didn't expect anything to change, I wanted to do it fairly and properly on track.

"The first attempt I went wide and damaged the front wing, second attempt I made it stick."

Kubica said he was "not risky" in the fight with his teammate.

"We arrived side-by-side into Turn 10, and I picked up understeer and the second time I left the space for George on the outside," he said.

Russell outqualified Kubica again but started at the back because Williams had to fit a new Mercedes energy store and control electronics to his car after a problem in final practice.

After recording his first last-place finish of the season, despite Williams comfortably being the slowest car, Russell he was not "disappointed or not satisfied".

"From my side, I felt no difference [with the wing damage], but the team were seeing some issues," said Russell. "I think maybe there was a small crack or something when I hit the polystyrene board.

"If we were fighting for points, we probably would have stayed out there and risked, gambled, but there was no need."