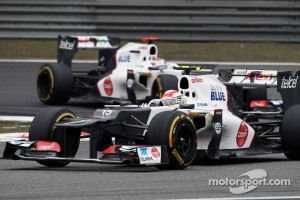 Last weekend in China, off the back of Sergio Perez's recent push for victory at Sepang, the small Swiss team ran mysterious 'Out of the blue' signage on the C31's engine cover.

The Blick newspaper said it was a "teaser" for a "big sponsor" that will be "announced in a few weeks".

Germany's Auto Motor und Sport relayed paddock rumours hinting that the deal could be with AT-T, the American multinational who last year pulled its title sponsorship of the then-struggling Williams team.

Another paddock whisper is that Sauber's new deal could be with the Russian billionaire Roman Abramovich, to promote his English premier league club Chelsea.