Silverstone has today announced that Rubens Barrichello, 2003 British Grand Prix winner and victor of 11 Grands Prix, is the latest Formula 1® great confirmed to participate in the circuit’s commemorative parades at its 50th Grand Prix. Taking place on all three days of this year’s FORMULA 1 SANTANDER BRITISH GRAND PRIX (04-06 July), the parades will transfer spectators back to a bygone era as the circuit comes alive to the sound of former British Grand Prix winning cars.

The popular Brazilian, who holds the record for the most Grand Prix starts in Formula 1® history (322), having driven for Jordan, Stewart, Ferrari, Honda, Brawn and Williams, will take to the wheel of a Williams FW07b, in homage to the team he raced for before his retirement from the sport at the end of the 2011 season.

The FW07b is the successor to the FW07, which made its debut midway through the 1979 season and - driven by Clay Regazzoni - secured Williams’ first ever Formula 1® victory, at the Silverstone British Grand Prix. The car then went on to win four out of the following five races that season (in the hands of Regazzoni’s team-mate Alan Jones), establishing the team as a real contender in the Championship and marking the start of an illustrious period of success for the team that would last for many years. 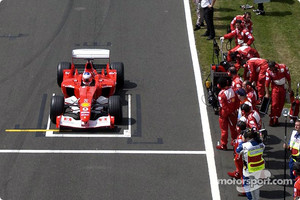 The FW07b, in the same livery as the iconic British Grand Prix winning FW07, is a poignant tribute to the car that won the team’s first ever Grand Prix, and will bring back special memories for Rubens Barrichello.

Barrichello, who secured the majority of his 11 Grand Prix victories with Ferrari, commented: “Silverstone means a lot to me, not just for my win in 2003, but from the times I spent there in my British Formula 3 and Formula 3000 days.

“During that time the layout of the circuit changed; I went through a lot there and I have always considered Silverstone my second home. Of course, my win in 2003 was one of my best and a really special moment, so I’m delighted to be taking part in Silverstone’s celebrations for its 50th Grand Prix.”

Other legendary cars and drivers confirmed to take part in the 50th Grand Prix parades include:

Further drivers and cars will be announced in due course.