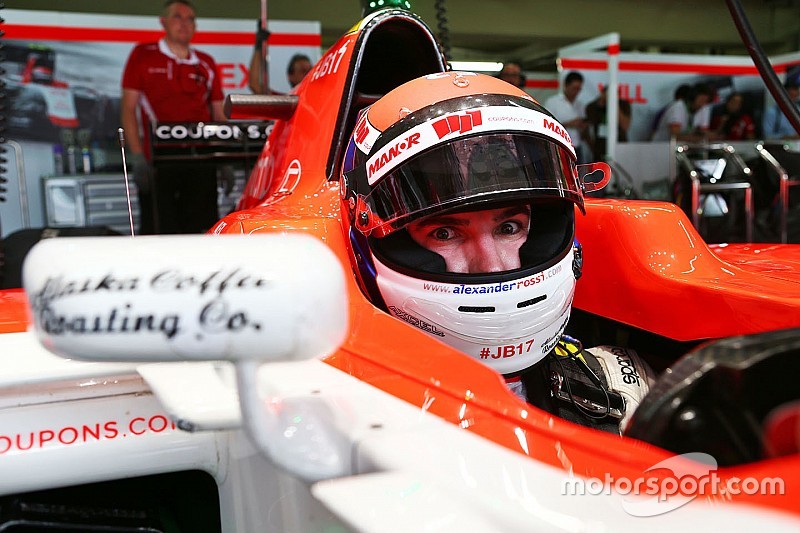 Recently deposed Manor Formula 1 driver Alexander Rossi says he aims to return to grand prix racing, but is looking at options in IndyCar and WEC for this year.

The American driver told Motorsport.com: “There are no [F1] race seats open, but at the same time I’ve been involved in F1 for so long that I believe I deserve to be on the grid.

"F1 still remains the focus, whatever I end up doing this year. But I need to be racing, I need to stay competitive."

Rossi said that despite missing out on a ride at Manor, which opted for Pascal Wehrlein and Rio Haryanto, his bond with the team remains firm.

“We are still in very close communication about the future,” he said. “Our relationship is strong and I have a lot of respect for those people.”

Rossi added that he felt he was a contender for a 2016 Manor seat, right up until the final decision, but that he was never 100 percent confident.

He said: “There was always a doubt in the back of my mind. Some days I thought I was in a stronger position than others. But to be honest I felt that we were in it right until the very end.

“So it was quite a big disappointment to not get it after what we had accomplished in 2015. It seemed to go quite well and everyone seemed pleased with the results, so I thought that I was in a strong position, but obviously the sport doesn’t always work like that.”

Nonetheless, Rossi is content he proved his worth in his five F1 starts.

“I’m very grateful I had the opportunity to do those five grands prix, it was wonderful I got that chance and the fact that I was able to perform so well is something I will always keep with me. I know I did the best I could; I don’t have any regrets on that front.”

Rossi dismissed the idea that the uncertainty surrounding Circuit of The Americas’ longterm future had impacted his chances of finding backers.

However, he did suggest that were he to have a fulltime ride in F1, it could help the sport establish itself in America.

“I don’t think the uncertainty of Austin, per se, had anything to do with it. But yeah, F1 is still struggling to find traction in the States – that’s no secret. It is progressing but it’s not yet where there’s a huge amount of interest, so we’ve been working on changing that.

“The five races I did last year included Austin and despite the abysmal weather, that did raise interest. Hopefully the [level of F1 interest in the US] does change in the future, but I’d need to be in a full-time drive for it to have a real effect.”

Asked about the rumoured deal with Andretti Autosport-Herta, Rossi said: “We’ve had some discussions but we’re also looking at things in other disciplines, like WEC. We’re looking at all the options.

“We gained a lot of momentum in 2015, had a strong year in GP2 and made those five grands prix after what was honestly a very challenging three years for me in Europe. The last thing we’d want to do is stop that momentum, so I want to be somewhere I can race at the front and show what I’m capable of.”

Rossi said he would have no problem racing on ovals, were he to sign for an IndyCar team, despite his racing experience coming on road and street courses.

He said: “I don’t have any issues racing on ovals if that opportunity presents itself. There’ll be a learning curve just like anything, but in terms of a personal apprehension about ovals, I don’t have any of that.”

With IndyCar’s Open Test being held at Phoenix next Friday/Saturday, Rossi admitted a decision on his future would have to be made soon.

Given his visit to Dale Coyne Racing in December 2014, Rossi admitted that DCR’s open full-time seat alongside Conor Daly was also an option for 2016.

He said: “I’ve been close to Dale for quite some time, we’ve stayed in touch, and yeah, he still has a seat open for sure. Again, I’m talking to as many people as I can to find out what’s the best seat in which championship.”

Rossi said there should be no question over his commitment to whichever drive he takes this season, despite his intentions to chase a Formula 1 drive. He stated: “Every time I step in a racecar, even if it’s a go-kart, that’s never an issue.

“I’ll be honest and say my desire is to do Formula 1, that’s the path I’ve been on my entire career and I’ve been racing in Europe since I was 16 years old. I haven’t raced in a non-F1-related championship. I don’t know what else is out there, so it’s impossible for me to say how much I’d enjoy it or not until I do it.