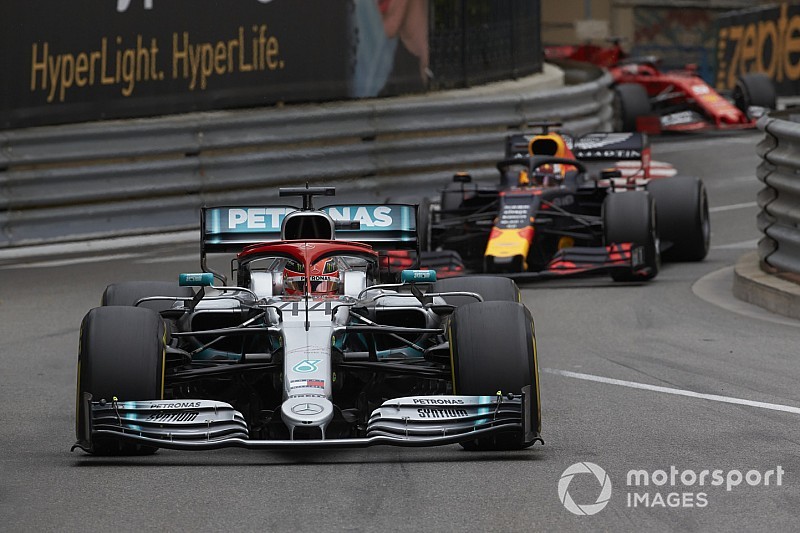 Former Monaco Grand Prix winners Nico Rosberg and Mark Webber have praised Lewis Hamilton for what Rosberg described as an "awesome job" en route to a nervy win in the Principality.

Webber, who won the race in 2010 and 2012 for Red Bull, acknowledged that it must have been hard for Hamilton to run ahead of his main rivals on tyres that were clearly past their best.

“It’s a horrible feeling, even though you’ve got absolute track position,” the Australian told Motorsport.com. “He knew he was never going to pit, but it was definitely a very, very tortuous way to win a grand prix, especially at Monaco.

“You could see he had no front grip, rotation was notorious in Loews, Rascasse, Portier, and obviously when you’ve got the added ingredient of Max Verstappen behind you on a different compound of tyre, it’s a bit of a headache.

“He had a bit of a wobble mentally in the middle, but a very, very measured drive, which you’d expect.

“I didn’t expect for him for one minute to put it in the wall, I expected him to run out of grip or something to happen with Max, but I didn’t expect an unforced error from him."

Nico Rosberg, who won in Monaco as Hamilton's teammate at Mercedes in 2013, 2014, and 2015, also acknowledged the quality of the Briton's performance.

“It was an awesome job Lewis did,” the German told Motorsport.com. “Because he was not the fastest in qualifying – maybe second-fastest – but he put it on pole nonetheless. And then the race was awesome.

“The team messed it up a little bit for him, and then he drove it home in the way he had to. He managed it perfectly, so really spectacular.”

Webber also commended the approach taken by Hamilton's Mercedes team on the pitwall.

"I think the boys were giving him good chat too just to justify the scenario. Clearly they picked the wrong tyre, they couldn’t say they were on the right tyre, that wasn’t the case.

"But the scenario was such that there was other information in the race to back up that it was possible."

Webber was pleased to see Verstappen launch an attempt to pass Hamilton in the closing laps.

“Lewis could have been going two or three seconds slower at the end there, and it still would have been hard for Max to pass," Webber said.

"He had a go, but Lewis was strong in the tunnel, and Mercedes power was very useful at key points.

“But it was worthwhile, absolutely, he’s a racer. To sit there for over an hour and a half is absolutely horrendous for your head. To sleep at night and think I didn’t even try something – but he did try, and that’s the racer in him, and that’s what we all want to see.”

The 0.4mm difference that may be costing Ferrari