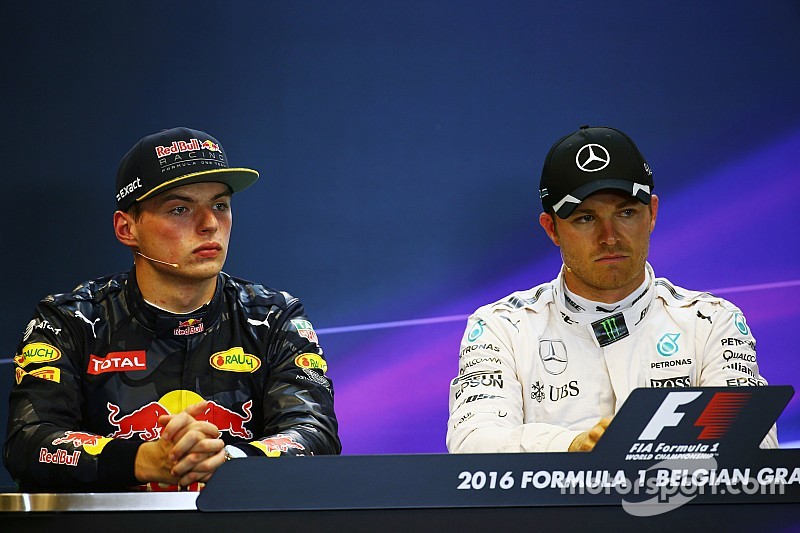 Nico Rosberg is not underestimating the threat from Red Bull in the Belgian GP after Max Verstappen qualified alongside him on the front row.

Rosberg will start on the soft tyres but Verstappen will be on the supersoft, which will potentially give him extra pace in the early laps.

But with Red Bull also looking good on the soft tyre over long runs, Rosberg is not expecting an easy race.

"Fortunately the supersoft won't be used in the race, so that helps!," said Rosberg. "But nevertheless even on the soft it's Red Bull who've been the fastest in long run pace for now, very clearly on Friday.

"So it will be a tough race tomorrow, very tough. Hopefully we've done enough to improve our pace, but that remains to be seen.

"With Max at the start he has an advantage, but after a few laps I'll have an advantage over him, which I'll be able to use."

The German is not worried about going wheel-to-wheel with Verstappen, who is sure to be highly motivated.

"I know how he races, so I definitely can adapt to that. I'm not worried at all. As in I know what has to be done to keep him behind!"

Rosberg says tyres will continue to be the key. "It's not problems, it's just challenges really, where they degrade quickly here," he said.

"The situation is just very unusual, because it's extremely hot temperatures and extremely high pressures, which they've given us as minimum. So it puts us in a different area.

"That's been a challenge for us also, to get our head around, so we really had to migrate into a new area with the set-up to cope with that, and fortunately it worked well in the end."

Ferrari heading for another weekend of 'what might have been' as Marchionne demands results?