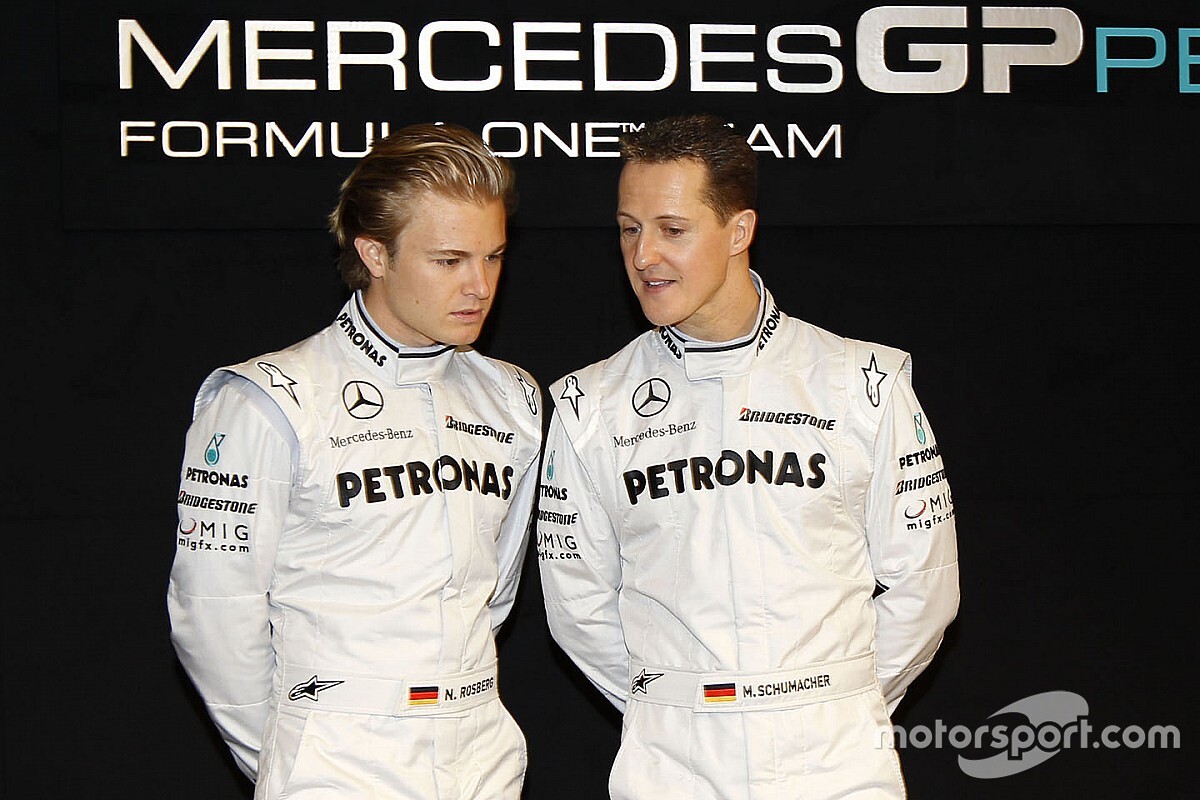 Nico Rosberg feared Michael Schumacher would manipulate the Mercedes team against him when they became Formula 1 teammates, saying the seven-time world champion acted “like God”.

Rosberg was handed the chance to join the new Mercedes works F1 team for the 2010 season following its takeover of the championship-winning Brawn squad.

The German driver looked set to be partnered by Nick Heidfeld, only for Schumacher to announce his shock return to F1 with Mercedes after three years away.

“The name Schumacher was not even on the horizon, no-one was even talking about that,” 2016 world champion Rosberg said in an interview on F1’s YouTube channel. “And then suddenly Ross [Brawn] calls me and says: ‘By the way, your teammate is not going to be Jenson Button or Nick Heidfeld, it’s going to be Michael Schumacher’.

“I was like oh my God, [having the] craziest thoughts, that I would have no chance, that the whole team would go against me, that Michael would manipulate his way through.

“And also I don’t even know, can I keep up with him? He’s the greatest of all-time, do I even have a chance? That was pretty crazy moment.”

Rosberg would go on to beat Schumacher in each of their three seasons together as teammates, as well as scoring Mercedes’ first F1 victory in over 50 years at the 2012 Chinese Grand Prix.

But it took time for Rosberg - who, upon joining Mercedes, had only two podium finishes to his name - to have his voice heard within the team due to Schumacher’s presence.

“When Michael came along, he was like God in the team,” Rosberg said. “When we had some strategy meetings, even my strategy was only being discussed with Michael and not with me, even though I was sitting there.

“So I then addressed that to the strategist that was holding those meetings, and we reflected on that together, and it really had a big impact, and from then on, strategy meetings were much better then for me.

“I felt much more comfortable, and I did get that attention from him just by showing my invulnerability in the end, and expressing my feelings.”

Rosberg said Schumacher was a “psychological warrior”, saying small tactics to get into his opponents’ heads came naturally to the ex-Ferrari and Benetton title-winner.

“There are so many examples, the Monaco bathroom for example,” Rosberg said.

“Five minutes before qualifying, there’s only one bathroom in the garage. He knows that I’m standing outside. I’m knocking like crazy, telling whoever is in there to please get out because I’m panicking, I need to pee before qualifying.

“He’s in there, just looking at his watch, chilling, knowing he’s going to create more and more stress in my mind, and then with one minute to go, he walks out all chilled out, and is like: ‘Oh sorry, I didn’t know you were there!’ By this time I’m in full panic mode.

“It just went on. There was another example where he would love to walk around topless in the engineering room, show his six-pack because it was another statement of strength to impress everybody who is there. His body was pretty sculptured.

“It just went on and on. There were infinite examples like that.”

When Ecclestone realised where the real money in F1 is