Rosberg "hasn't seen any self destruction" in Hamilton 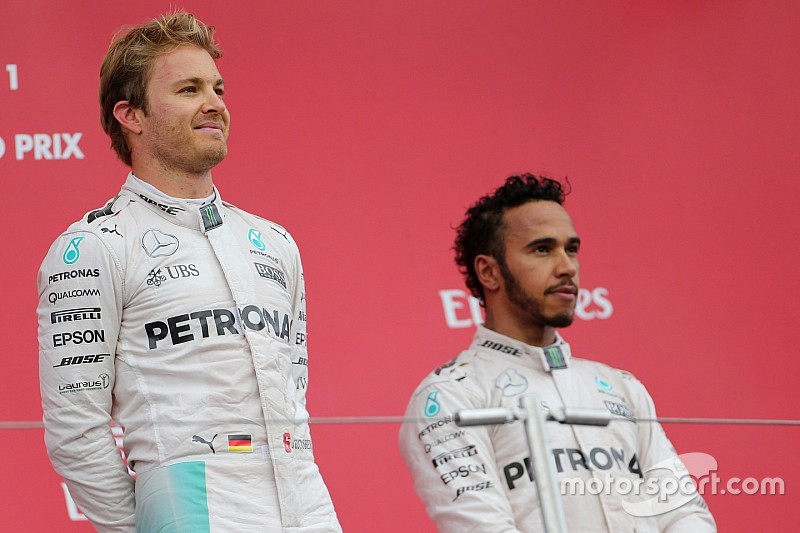 Nico Rosberg says he is not underestimating Lewis Hamilton’s ability to fight back in the Formula 1 world championship, after revealing the Briton was more focused in Japan than he has been for a while.

While much was made of Hamilton's off-track behaviour over the Suzuka weekend – as he walked out of a press conference over what he claimed was 'disrespectful' media coverage – Rosberg said he had not been aware of any problems with his teammate.

In fact, rather than believing that Hamilton's mind was elsewhere, Rosberg said all he had noticed was a new-found determination from the world champion to get the job done.

When asked about Hamilton's behaviour with the media, Rosberg said: "First of all I don't know any of these things. I don't see them during a race weekend, so I don't know what has been going on.

"But I can tell you behind the scenes he has been as focused as ever. Because – especially after a setback like Malaysia – he was working the longest hours I have seen him work for many, many months trying to find those little bits of lap time.

"I have seen him extremely motivated and focused with the engineers."

When asked if he took any encouragement from what one journalist referred to as Hamilton hitting the 'self-destruct' button, Rosberg said: "As I said, I haven't seen any self destruction.

"The Lewis I saw was massively motivated and focused, because I don't see the media over the race weekend and even after.

"Anyway, for me, it is about the getting the best out of myself and not focusing on what Lewis's state of mind is."

Rosberg has continually refused to get too focused on the championship situation this year, instead worrying only about individual races.

And that is why despite opening up a 33-points advantage in the title chase, he thinks any change in attitude for the final four races would be wrong.

"And finally the best reasoning is it is actually working quite well: so why change something if it is going quite well?

"The approach I have [is working] - coming here, focusing on the weekend, trying to get that win and I got it."

Carlos Sainz guest blog: "It was like telling me I’m not as good as Max Verstappen when I believe I am"