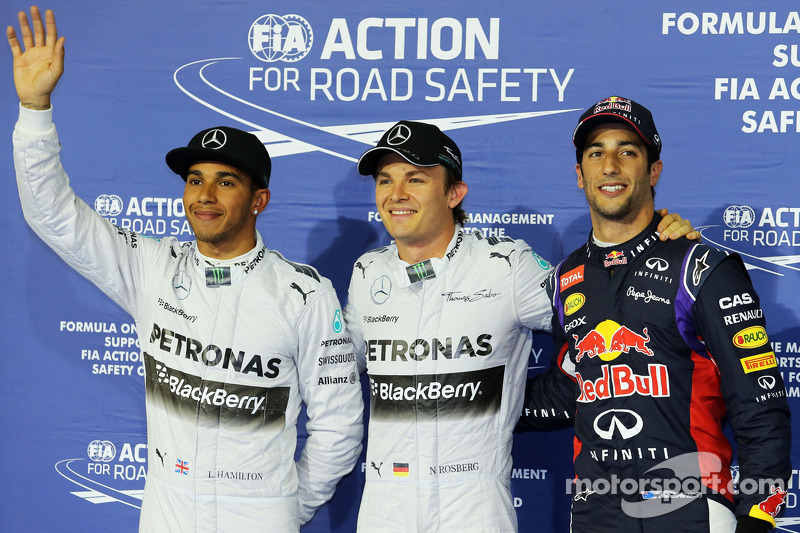 Nico Rosberg’s result at the end of Q3 means that he has achieved his first pole position of the season at the spectacle of the Bahrain International circuit.

Mercedes’ Nico Rosberg will be the leading man when the FIA Formula One 2014 Bahrain Grand Prix gets underway tomorrow, as the German driver pipped his team mate; Lewis Hamilton to pole position at the end of today’s qualifying shootout.

Rosberg’s result at the end of Q3 means that he has achieved his first pole position of the season at the spectacle of the Bahrain International circuit. Rosberg’s gain became Hamilton’s misfortune, when the Englishman appeared to suffer a lock up with the tyres on his car as he was nearing the end of his final flying lap. The 2008 World Champion will accompany Rosberg on the front row of the grid.

Red Bull’s Daniel Ricciardo may have picked up the final place in the top three at the end of Q3, but the Australian’s run of bad luck continues into another race weekend of the new season and since joining the reigning Constructor’s Championship winning team. Ricciardo will drop 10 places down the grid and will start from 13th place, as a result of a penalty issued by the stewards at last weekend’s Malaysian Grand Prix due to an unsafe release from the pits during the race. 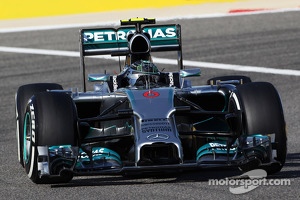 Ricciardo’s team mate, Sebastian Vettel also had a disappointing end to his qualifying session as he failed to make it to Q3 and the all-important top 10 shootout. The German driver missed out on a place in the ultimate battle after qualifying in 11th place, but will be promoted to 10th position when Ricciardo’s penalty is taken into account.

Williams’ driver, Valtteri Bottas was one of the surprises in Q3 as he completed the final session in fourth place. The Finnish driver will be another one in the top 10 to benefit from Ricciardo’s move down the grid and Bottas will begin the race from third place. Bottas was joined in the top 10 shootout by Force India’s Sergio Perez, who was another driver that came from the usual outside group to join the top Championship contenders towards the front of the field. Perez qualified in fifth place, but will move up into fourth position when Ricciardo’s penalty takes effect.

Sauber’s Adrian Sutil appeared to be in a spot of bother when he found himself under investigation by the stewards in qualifying with Lotus’ Romain Grosjean. The incident between the pair was reportedly being looked at following the conclusion of qualifying, as it appeared that Sutil forced Grosjean off the track. It has not yet been announced as to whether any penalties will be issued by the stewards.

Ferrari’s Kimi Raikkonen seemed to keep out of the limelight in qualifying and just quietly climb up the grid. The Finnish driver ended Q3 in sixth place but he will start the race from fifth position when the grid is shuffled. Raikkonen’s team mate, Fernando Alonso qualified in 10th place and the Spaniard will begin from ninth place tomorrow with the grid changes.

McLaren’s Jenson Button pipped his rookie team mate, Kevin Magnussen in qualifying as the Englishman finished ahead in seventh place. Magnussen qualified in ninth place, but the pair will begin the race from sixth and eighth place respectively with Ricciardo’s penalty altering his position.

Bottas’ team mate, Felipe Massa was the final driver who made it through to Q3 and he ended the session in a McLaren sandwich after qualifying in eighth place. The Brazilian driver will still find himself between Button and Magnussen when the race gets underway tomorrow, even with the shakeup in the grid as Massa will start from seventh place.

Aside from Vettel’s early exit from the proceedings at the end of Q2, the rest of the field were left to fight over the remaining positions towards the back of the grid, with the exception of Ricciardo who will line up among them tomorrow.

Perez’s team mate, Nico Hulkenberg will be another of the select few to benefit from Ricciardo’s penalty though as the German driver will move up into 11th place. Toro Rosso’s new recruit, Daniil Kvyat is also set to gain as the Russian driver will begin the race from 12th place.

Rosberg and Hamilton will lock out the front row of the grid as the Bahrain Grand Prix gets the green light tomorrow. It remains to be seen whether the pair will remain at the top when they reach the chequered flag at the end of the race. Rosberg and Hamilton are likely to have a battle on their hands, as they race under the lights and have the rest of the field to contend with behind them and in particular, reigning World Champion, Vettel who is certain to have his sights set on getting back to the top step of the podium.