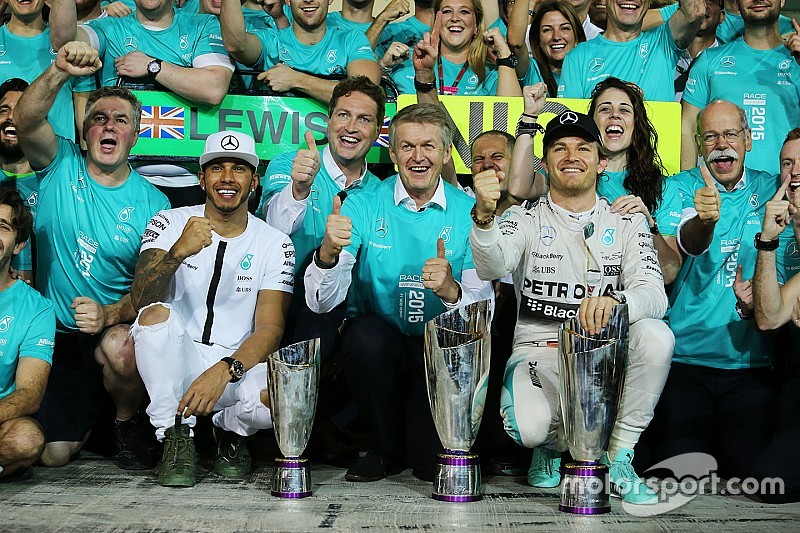 Historic weekend for the Silver Arrows

Nico Rosberg today claimed his third consecutive Grand Prix victory - a career first - to make it six wins in 2015 and 14 in Formula One to date. Lewis Hamilton pushed hard to make an offset strategy work but eventually came home in P2 - setting the fastest lap of the race in the process.

The Silver Arrows have now sealed a record-breaking 12 one-two finishes in 2015 - surpassing the teams' 2014 benchmark. With 703 World Constructors' Championship points, Mercedes AMG Petronas has also exceeded its 2014 total - without the boost of double points at the season finale.

Lewis wraps up a spectacular 2015 season in P1 with 381 World Drivers' Championship Points, with Nico finishing runner-up on 322.

"This is the perfect ending to the season for me - something I hoped for so much after a tough year. To finish with six poles and three wins in a row is awesome. I am so happy that I found some performance at the end of the season. I also made my peace with this track after the toughest moment of my career here last year, which is a nice feeling. Today was really a perfect race. The start, the pit stops and the tyre management were all really good and I felt like I had it all under control.

Thanks so much to my team for this amazing Silver Arrow - everyone at the factories and the track has done such an incredible job all year. I would love to start the 2016 season tomorrow - but I know that´s not possible. It's strange, I'm enjoying the moment so much - but I'm thinking already very much of next year what I could change and where I can improve. We will all now have a well-deserved break with our families and I look forward to spending some more time with my wife and my little daughter."

"That was a very difficult race. My tyres were done at the end of the first stint sitting behind Nico. The second stint was very good - but I don't really know what happened strategy-wise at the end. I haven't finished the season as strongly as I started it - but what an incredible year it's been. This team has done a remarkable job, so a big thank you to everyone back at the factories. I wouldn't be standing here as World Champion without them. I'll go away now for the winter aiming to come back stronger, fitter and straight on top of our new car for 2016."

"A really great race for the team today, after so many great races this season. It was a busy evening both on the track and on the pit wall, with a lot of talk on the radio. We had a bit of a worry on Nico's engine with the high mileage. Then, with Lewis, we wanted to leave strategy open to do something different with the offset and give him the best chance of the win. But in the end, Nico was extremely strong through the whole race and deserved the win; it was an accomplished performance. I am very pleased with the season.

We've achieved some amazing records this year with the number of pole positions, front row lockouts, race wins and one-two finishes. But that's not what's most important. The most important thing is the spirit in the team, which has been fantastic. It's a pleasure to work with these guys and girls and I know they're all as determined as I am to carry this form into next year. Ferrari made a huge step forwards last winter and their development curve has been quite amazing. We need to be prepared for the same this year also and make sure we progress even further. When you start to think this is an easy ride you will lose. "

"A great way to end the season, with a tense battle between Nico and Lewis running two different strategies under the Yas Marina floodlights. Each driver was stronger at different points in the race, which was fascinating to watch. Ferrari also kept us honest, with Kimi showing good pace, so we also had to mindful of that threat. Overall, though, Nico proved to have stronger pace overall and controlled the race to round off the season with a thoroughly well-deserved win.

I'd like to take this opportunity to thank both drivers for doing a fantastic job over the course of the season. Their ability to manage the car when required and not make mistakes has been as impressive as their phenomenal pace every weekend - and a key element in securing the success we've enjoyed this season. A big thank you also to everybody who has contributed to designing, building and running this car so flawlessly this season."

Ferrari: A third place for Kimi Raikkonen at the night race in Abu Dhabi