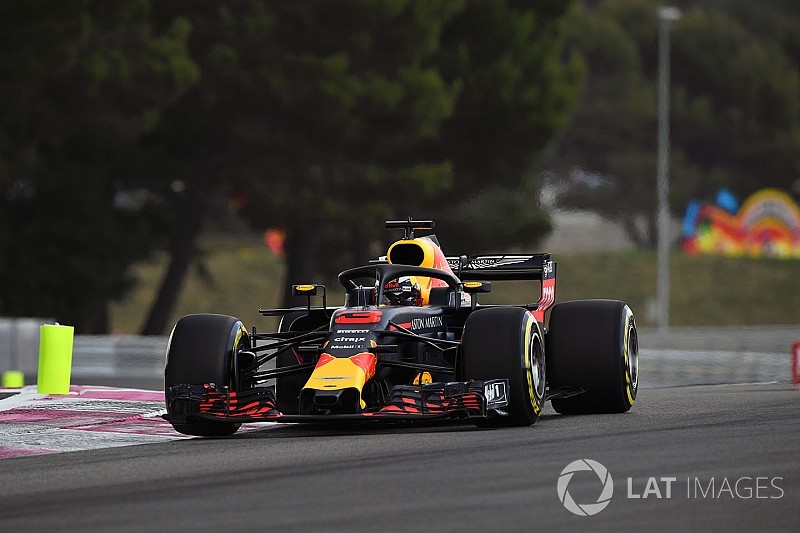 Daniel Ricciardo says his hopes of a podium finish in the French Grand Prix were dashed after his car was "wounded" by damage sustained to his front wing.

The Australian had been running third, a few seconds behind teammate Max Verstappen, ahead of the tyre change phase of the race.

But during the stop, his team discovered that parts of his front wing had come away and, almost immediately, Ricciardo's pace began to suffer as he encountered understeer because of the loss of downforce.

In the end, Ricciardo fell away from his teammate and was overtaken in the closing stages of the race by Ferrari's Kimi Raikkonen.

Speaking about the race, Ricciardo told TV crews: "Disappointed I guess. We had pretty good pace towards the end of that first stint and we were catching Max, and pulling away from Kimi at the time.

"Then when I pitted, the boys said the front left part of the wing was damaged and they think it happened just two laps before the pitstop.

"I started to all of a sudden get quite a lot of understeer. I don't know if it was a failure or we hit some debris and that broke it.

"Already with the soft tyre we were struggling when we left the pits, and then a few laps later the team said the right part broke, so both parts identically seemed to break. Whether it was a failure or debris I don't know yet.

"But it happened and we were slow because of that. We had a lot less downforce and understeering, so with Kimi he was always going to catch us with that pace...we were a wounded car from just before the first pitstop."

Red Bull boss Christian Horner told Sky that the team did not know if the front wing parts had come unbonded due to an impact or something else.

"The top two elements of the flap became 'disbonded'," he said. "I think maybe some debris or something like that has hit it.

"But it has been a good haul of points for the team today would have been nice to have both of them on the podium."

Vettel says he had "nowhere to go" in Bottas crash