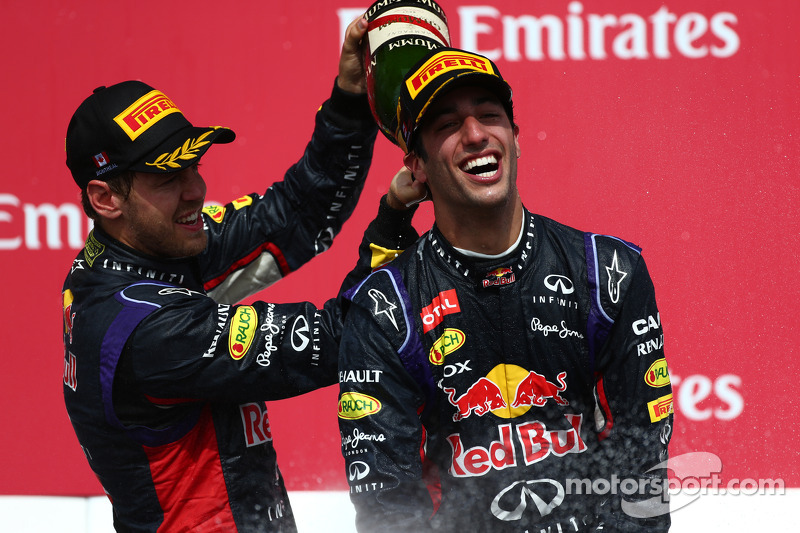 The 2014 Canadian Grand Prix will go down in history as one of the greatest ever.

Red Bull’s Daniel Ricciardo has picked up his first Formula One race victory following a dramatic climax to the FIA 2014 Canadian Grand Prix.

The Australian driver managed to take the lead from Mercedes driver and pole sitter, Nico Rosberg as the action on the track was nearing the end. Ricciardo’s team mate Sebastian Vettel crossed the finish line to secure the third and final spot on the podium.

As the top three drivers had the end in sight, Force India’s Sergio Perez and Williams’ Felipe Massa finished the race with a vicious crash on the final lap. The pair made contact as they and Vettel battled for the final spot on the podium. The incident prompted the appearance of the safety car as Ricciardo took the chequered flag. Both drivers were able to walk away from the scary wreck, but both were transported to a local hospital for precautionary reasons.

Rosberg was the sole driver flying the flag for Mercedes, when his team mate, Lewis Hamilton entered the pits on lap 48 and retired from the event. Hamilton had reported via the team radio of concerns about the right rear brakes on his car and both drivers mentioned that they had no power at one stage of the race. Rosberg also found himself under investigation by the stewards on lap 28 for track limits, but it was later reported that no further action would be taken with him.

The battle between Rosberg and Hamilton as both their cars began to fail was one of the most riveting battles we've seen in recent memory.

McLaren’s Jenson Button grabbed a few more points than expected, due to the incident between Massa and Perez, which saw the 2009 World Champion move up the grid. Button finished the race just behind Vettel to take fourth place. Button’s team mate, Kevin Magnussen also picked up some championship points for himself in ninth place.

Perez’s team mate, Nico Hulkenberg seemed to quietly make his way through the field during the race. The German driver had another solid run and claimed fifth place amid the carnage.

Ferrari’s Fernando Alonso completed the race in sixth place and the Spaniard once again beat his team mate, Kimi Raikkonen in the process. The Finn had to settle for the 10th and final point scoring position after a spin partway through the race.

After his team mate's accident on the final lap while battling for fourth, Valtteri Bottas moved into seventh place as the checkered flag flew and the safety car was deployed.

Bottas finished the race just ahead of Toro Rosso’s Jean-Eric Vergne, who completed the 70 lap battle in eighth place. Vergne’s team mate, Daniil Kvyat was among those who failed to reach the finish line. The Russian driver pulled off the track on lap 49 and took no further part in the action.

Sauber’s Esteban Gutierrez was another driver who bowed out early from the proceedings today. The Mexican driver started the race from the pit lane, after he failed to take part in qualifying yesterday and the team had to repair his car following a FP3 crash that damaged the chassis. Gutierrez entered the pits on lap 67 and retired from the race.

The Lotus Renault duo of Pastor Maldonado and Romain Grosjean had a double retirement from the race for the team. Both drivers entered the pits on separate occasions in the race and did not get back onto the track again.

The theme of double retirements spread to the Marussia duo of Max Chilton and Jules Bianchi. The pair had a coming together on the opening lap. For Chilton, it was the Englishman’s first retirement in Formula One since he made his debut in the series at the beginning of last season. The safety car controlled the race until lap seven, as the track was made raceable again after the crash.

It was reported on lap 11 that the incident between Chilton and Bianchi would be investigated after the race. It has not yet been reported as to whether or not the stewards will take any further action with the pair.

Caterham’s Marcus Ericsson was the first of the two drivers for the team to retire from the race. The Swedish driver entered the pits on lap 11 and it was reported that he had an engine problem with his car. Ericsson’s team mate, Kamui Kobayashi was issued a five place grid penalty for a gearbox change. The Japanese driver did not make the full race distance either and pulled off the track on lap 25. As you can tell, the attrition was high in Montreal Sunday. 14 cars were classified, but only 11 actually made it to the line.

The 35th Canadian Grand Prix demonstrated how unpredictable the sport can be. It is certain that Ricciardo will remember his magical moment in Montreal today and he, together with the rest of the field, now have two weeks until they get back on track again for the Austrian Grand Prix.

Newey signs new agreement with Red Bull, but set to step back from F1