Ricciardo "struggled" with ultrasofts in China 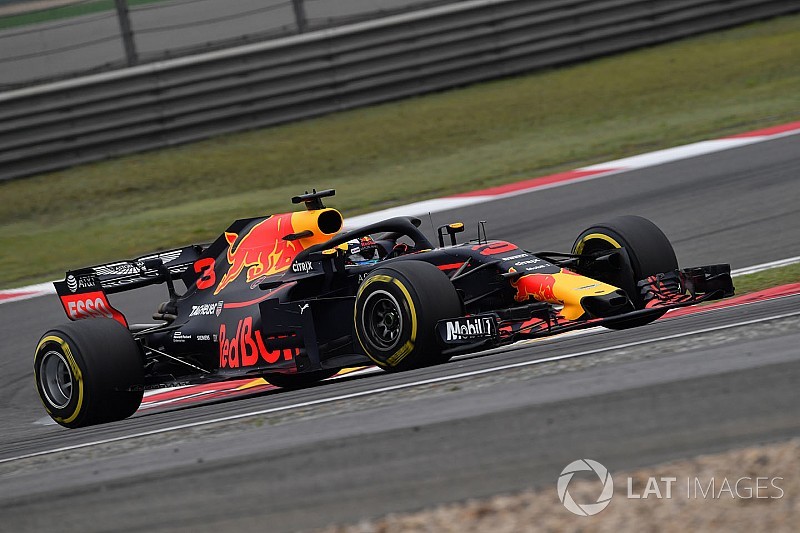 Daniel Ricciardo says he is not happy with his Red Bull in qualifying trim after the first day of Formula 1 practice ahead of the Chinese Grand Prix.

The Australian ended the afternoon session down in ninth position, one second off the pace, which he put down to not being able to find time when using the ultrasoft tyre for qualifying simulations.

"The ultrasoft I struggled with on the qualifying run," said Ricciardo. "This morning and this afternoon we didn't really find much time with it.

"I didn't find a good balance on that today, we went two tenths quicker from the soft to that, and it's two compounds softer, so we struggled to get one lap out of it.

"We used that tyre two times today and both times I wasn't happy with it. On long runs we were able to manage it a bit better but we couldn't get much out of it with low fuel.

"The ultrasoft is difficult, I just struggled to get more grip out of it today.

"This is a front-dominated circuit so you struggle a lot with the front tyres, but also the rear wasn't that easy today either."

While Ricciardo hopes Red Bull can make improvements to his car in qualifying trim overnight, he admitted his strategy could be to avoid the ultrasoft tyre as much as possible.

"I don't think it's a disaster, I don't even know if we'll use the ultrasoft that much in the race, but we want to find a bit more laptime with it," he added.

"It's no secret that a few people are thinking of qualifying [and therefore starting the race] on the soft, it's not that bad a tyre around here.

"The ultra doesn't seem to last that long, so you might see a few yellow tyres [softs] in Q2."

Ricciardo believes that Red Bull is in much better shape in race trim for this weekend.

"With the soft and the medium we're more competitive," he said. "We're looking better on those tyres – that might push us in a certain direction for the race.

"Half of the morning and half of the afternoon was good. With the harder compounds I was more comfortable.

"I don't think we are actually looking too bad. We'll make some adjustments and be stronger tomorrow."