Ricciardo: Getting outqualified by Verstappen “sucks” 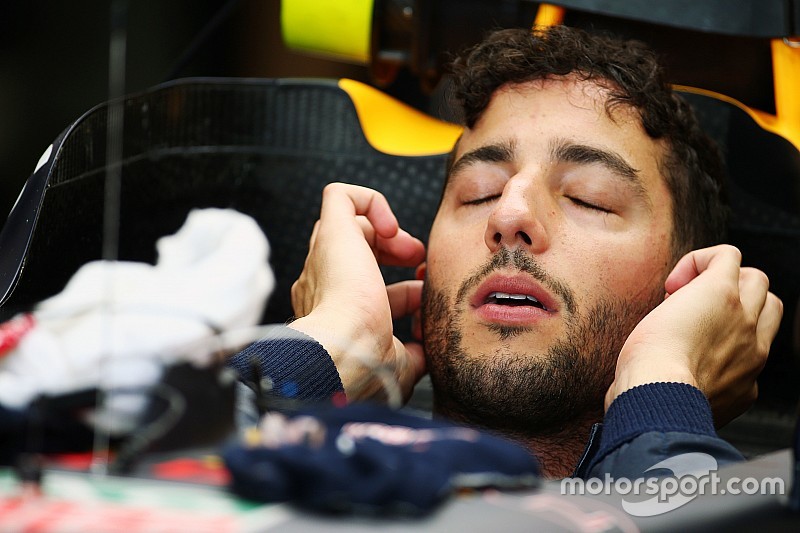 Red Bull’s Daniel Ricciardo suffered his first qualifying defeat by a teammate in 2016, and admitted being beaten by Max Verstappen at Silverstone “sucks”.

Ricciardo had outqualified both Verstappen and early-season teammate Daniil Kvyat in the previous nine races of the season so far, but failed to outpace the Dutch teenager in Q3 for the British Grand Prix.

The Red Bull duo will start third and fourth, behind the all-conquering Mercedes.

“Yeah, it’s the first time this year – it sucks getting beaten in any case,” said Ricciardo. “You’d love to go through a perfect season, but we just missed a little bit here and there today.

“I thought the car was pretty good in the high-speed stuff, I was confident there, just the low-speed, the last chicane, I could really get through there clean. That was my Achilles Heel today. It’s tricky when the wind is changing all the time, but same for everyone. One mistake can be quite costly.

“I didn’t really get the 100 percent out of it today. Tomorrow is points day, I’ll try and maximise that and get on the podium. I’ve got my eyes set on that.

“Mercedes look to be very quick, sub-1m30s is very impressive – I’m not too happy about that! I think Ferrari will give us a run for our money in the race, but third is definitely up for grabs. You’re gonna see a race tomorrow, I won’t be hanging about.”

Team principal Christian Horner also spoke of his delight at beating both Ferraris in qualifying, and hopes this will become a trend that can move the team up to second in the Constructors’ Championship in the second half of the season.

“To convert our pace into a second row grid position with both cars was certainly more than we could have expected coming into the weekend,” Horner told Sky Sports F1. “Hopefully we can give them a hard time tomorrow, our long-run pace is better than our short runs.

“We’re 24 points behind Ferrari, so if we can nick a few points this weekend then there are circuits coming up that are good for us.”

On the subject of Ricciardo losing his 100 percent qualifying record over his teammate, Horner added: “It’s the first time [Max has] outqualified Daniel since he’s been in the car, so he’ll take confidence from that I’m sure.

“It’s all pretty close, I think Max absolutely nailed it and did the job that was required – his first lap was a stonker, in fact.”