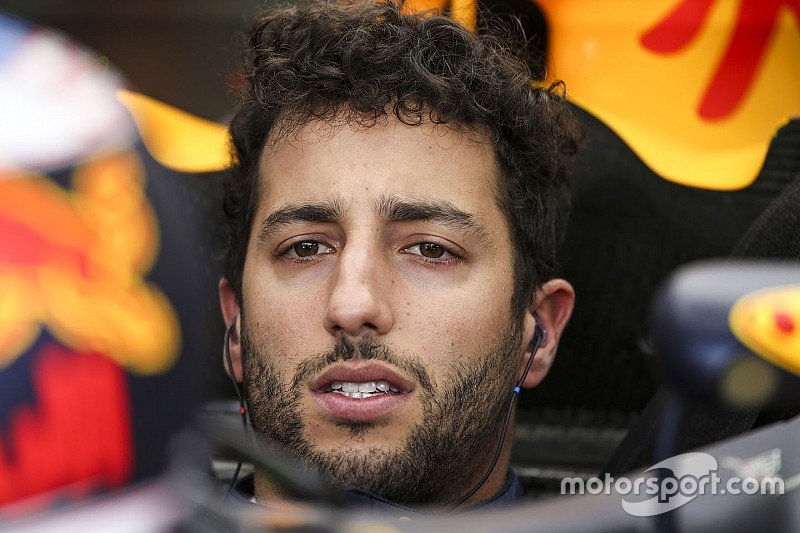 Daniel Ricciardo thought Red Bull was in contention to win the Bahrain Grand Prix in the first stint, when he and Formula 1 teammate Max Verstappen were keeping up with the leaders.

The two Red Bulls challenged the top three cars of Valtteri Bottas, Sebastian Vettel and Lewis Hamilton during the opening stint, with race leader Bottas leading a five-car train as he struggled with incorrect tyre pressures.

But the team’s race unraveled after that, with Verstappen crashing out with brake failure after making a pitstop, and Ricciardo struggling for grip after the safety car period that came shortly after his teammate’s off.

“It was a race of two halves really,” said Ricciardo. “At the beginning I genuinely thought we had a chance to win.

“That stint was looking very competitive and I could see Valtteri was struggling.

“I was at the tail end of the front pack and I could see everyone else in front of me – they were sliding and looked like they were struggling more.

“It was easy for me to stay there and I was looking after my tyres, so at that point I was thinking it could be on today, not only for a podium but for a win.

“The safety car worked for me in that we jumped up to third but it wasn’t so good for our tyres and that’s where we lost a lot of ground.

“Even once we settled into a pace and the chaos settled we fell back and I was struggling with grip at the front and rear.

“We never really got that [soft] tyre working for us today.”

Team boss Christian Horner put Ricciardo’s difficulties down to problems getting the soft tyre up to temperature, and he said by the time the Australian switched back to the super-softs for his final stint, “fifth place was the best that we could achieve”.

Verstappen, meanwhile, praised his team’s strategy for making an early pitstop, even if his race didn’t last much longer after that call.

“I could keep up with the leaders, the car was performing really well and the pace was good,” said Verstappen.

“We made the right call with the pitstop to try and undercut the two Mercedes but then the rear brakes failed on lap 12 and it was over.

"There are definitely positives to take away from today – the car was working a lot better there than the past two races so it’s just an unfortunate ending as we could have scored some really good points.”