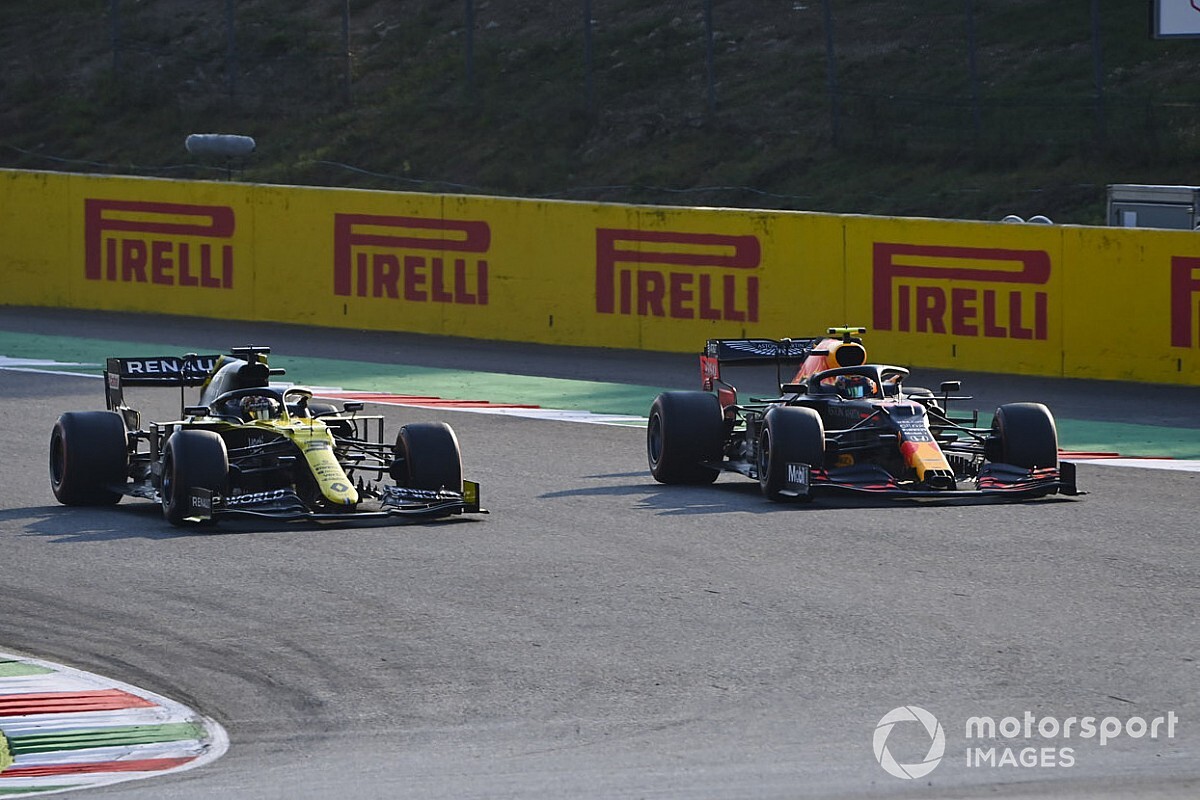 Renault Formula 1 Daniel Ricciardo admits to being "a little bit sad" at losing third place to a flying Alex Albon in the final stint of the Tuscan GP.

The Australian tried in vain to harry the Red Bull driver into a mistake, and eventually had to settle for fourth, matching the result he achieved at Spa.

Ricciardo ran a comfortable third for the middle part of the Mugello race, and after the third and final standing start he even briefly ran second, having got ahead of the Mercedes of Valtteri Bottas.

The Finn soon re-passed him, and then with nine laps to go he lost his podium slot to Albon.

"I'm somewhere in the middle, I'm bouncing from happy and fulfilled to a little bit sad," Ricciardo said when asked how he felt after losing third.

"The truth is it's a bit like Monza last week, we put ourselves in the best position, we did all we could, and just at the very end we didn't have that last bit to hold onto the podium.

"With Albon it was frustrating to see his pace. I felt like the first stint and the second we were kind of matching, if not pulling away, on the soft at the start of the race. So I didn't feel he had that pace.

"And then all of a sudden at the end he really had had a big step on us, and it was really the third sector, I felt where he was quicker. And that allowed him to get onto my tow and DRS.

"So that was the sector that mattered, and that's where he seemed really strong, through Turn 12 and 15. So it was frustrating, because I was like, 'Where did this pace come from?'"

Ricciardo thought that he could take advantage of Albon's relative lack of experience, and kept the pressure on.

"I knew if I could hold on to him for a few laps, maybe it would hurt his tyres," he said. "But he disposed of me pretty quickly, and I was, 'Alright, that's probably done.'

"But also in the back of my mind, I was like, 'Okay, the kid's never been on the podium before. If I can try to do anything I can to keep some pressure on him and to force him to keep driving at a high pace, maybe something can happen.'

"I saw a few times he put a wheel a little bit in the gravel out of Turn 5, so I was like maybe he's overdriving or getting nervous.

"The first five laps he had too much pace for me to do anything. I think I was able to match him a couple laps later, but even then, I didn't feel I was closing too much."