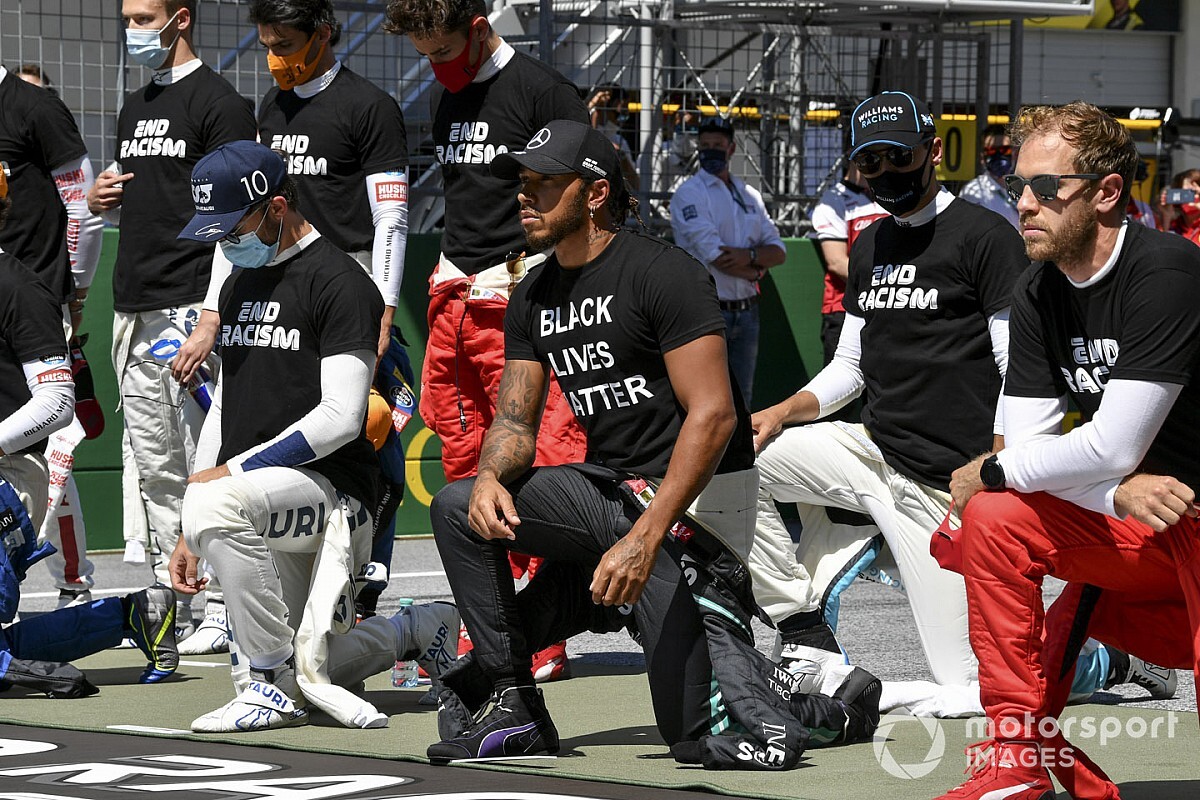 Daniel Ricciardo says Formula 1 is not looking to “put anyone in jeopardy” by forcing drivers to take a knee in Austria amid unease from some over the gesture.

At a time of ongoing protests and activism around the world against racial injustice, F1 has been vocal in its anti-racism messaging throughout the Austrian Grand Prix weekend so far.

All 20 drivers wore t-shirts on the grid before the race on Sunday reading ‘End Racism’, and discussions had taken place over taking a knee on the grid in support the anti-racism movements - a move seen at the start of recent Premier League football matches. But not all drivers were comfortable with the plan to take a knee before the race start, with a handful not doing so – although the majority did.

Six-time world champion Lewis Hamilton said on Saturday there was still “silence” from some drivers over anti-racism, and called Friday’s drivers’ briefing “interesting”.

The Grand Prix Drivers’ Association issued a statement confirming that each will be free to “show their support for ending racism in their own way” ahead of the race.

Renault driver Ricciardo explained that while all of the drivers are united in the anti-racism message, some of his peers had raised concerns about the connotations with taking a knee in their own cultures, and how it would be received in their home countries.

“The chat [on Friday] with the drivers was essentially saying all of us are 100% on board with supporting it and ending racism. None of us our anti this, so we all support this,” Ricciardo said.

“I just think there was a little bit of difficulty with some drivers and their nationality, and what something like taking a knee would represent.

“Obviously the reasons why we would do it is purely to support Black Lives Matter. It is for nothing political or anything else.

“But there is a little bit of a fine line with some drivers and their nationalities and how it is perceived.

“We heard all of them, all their opinions, and we are not going to try to put anyone in jeopardy. We all understood that we will do what we feel comfortable with.

“But no one is going to be judged or criticised if they don’t stand there in a certain way or take a knee.”

Haas driver Kevin Magnussen recognised that while taking a knee would be open to interpretation, he intended to do so on the grid.

“It's a difficult one, because people are always going to interpret it in different ways,” Magnussen said.

“I think I've got it, I am going to take a knee, but not because I'm supporting the BLM organisation. I'm just supporting this whole movement that the whole world seems to be coming together for, ending racism.

“That's what I'm trying to show tomorrow by kneeling. I hope people will see [it] as a symbol of support for the whole movement that is going on at the moment for ending racism and discrimination.”

McLaren driver Carlos Sainz stressed that discussions within the GPDA over the gestures should remain a private matter.

“You are assuming that we are going to take the knee,” Sainz said on Saturday after qualifying.

“Whatever is being discussed inside the GPDA, it's a private matter. And it's absolutely confidential. It's a must that when we go into those meetings, drivers also realise that this is a private thing, and a private discussion.

“At the moment not everyone is decided. Not everyone made absolutely 100% clear their position. I guess you will have to wait and see tomorrow.”

McLaren team principal Andreas Seidl expressed his unease over the debate being boiled down to whether or not drivers take a knee, and that all drivers should express themselves as they each wish.

“I don't like that this important topic is getting reduced at the moment to the point if someone is taking a knee or not,” Seidl said.

“That's not the point of the discussion. I think it's important that for every driver, for every team, they should be able to decide themselves how they want to express themselves.

“As you know on the McLaren side, we have a number of public initiatives running. We're here with a different livery and we have on the car also the end racism hashtag which was important for us to show our support and to show also how serious we take these different topics and initiatives.

“That's what I think is important, and not the discussion about taking a knee or not.”