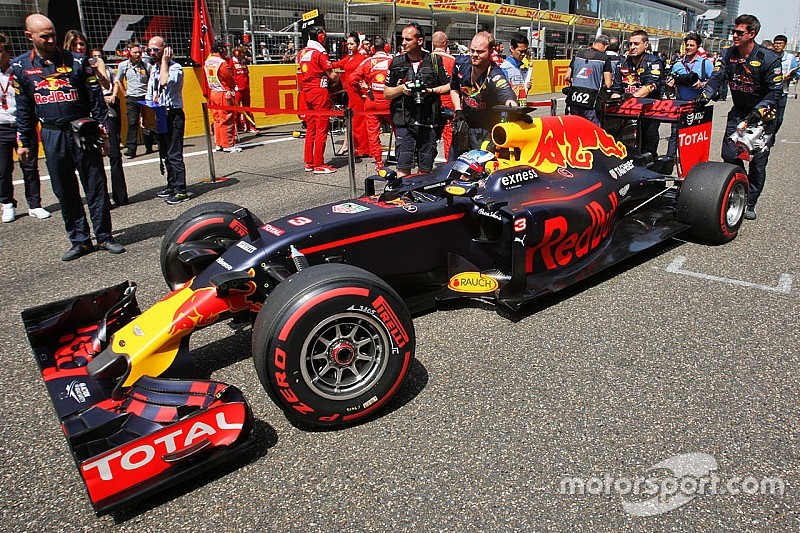 Daniel Ricciardo believes Red Bull can get back into genuine contention for race wins before August’s summer break – if engine upgrades deliver what they promise.

Ricciardo was the star of the Chinese Grand Prix both in qualifying – when he started from the front row – and in the race when he battled back to finish fourth after suffering a puncture while leading.

He believes steps made by engine supplier Renault, whose units are branded are branded TAG Heuer in 2015, have edged it towards the leading pace.

“We’re certainly getting closer,” said Ricciardo. “I think still at the moment if a Mercedes and a Ferrari does their perfect lap they’re still ahead of us. But we’re certainly a lot closer.

“Obviously the chassis is better for one, but if you look at the speed traps we’re a chunk closer than we were last year. So I think we’ve got improvements from both sides which is really encouraging. I’d say it’s pretty even from both sides, chassis and power units.

“I think the chassis naturally gets better as the season goes on, obviously with some updates coming from the power unit side hopefully these things keep going in the same direction and then we can genuinely be on at least Ferrari’s pace in the four before the summer break.”

“Three-way fight at the front”

Ricciardo admits that the increase in power output in 2016 has impressed him, which has allowed Red Bull Racing to run third in the constructors’ championship behind Mercedes and Ferrari.

“We didn’t expect the power unit to be that different to how we ended last year, up until the update we get probably in Montreal,” he added. “But it seems like the changes they did make have given us a bit more, so that’s cool – it’s given us a bit more than we thought for now.

“As long as the updates give us what we do expect, we’ll be looking good. It should put us on a Ferrari power unit level, which is for sure competitive enough.

“We’re trying to make your racing exciting again, try to have a three-way fight at the front.”

In terms of updates this weekend, Ricciardo reported they were: “Some aero stuff, bits and pieces around the car. A bit everywhere, it’s always going on. A few things carried over from China as well.

“I do believe Ferrari and Mercedes is running more downforce than us. But we seem to be coping well, running a bit less and hanging with them through most corners.

“It’s been like that through ’14 and ’15. We’ve always run a bit less downforce just to stay in the fight. Come Barcelona and Monaco, you can’t really compromise there – you’re 90-99 per cent maximum downforce.

“Then we might see the true power unit difference.”

Russian GP: Next up for Verstappen and Sainz Jr.