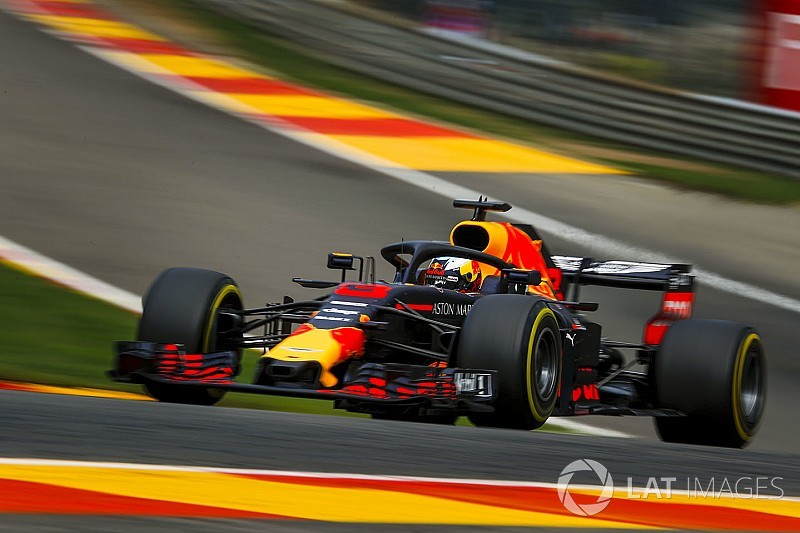 Red Bull Formula 1 driver Daniel Ricciardo admitted he was confused during Belgian Grand Prix qualifying as he continued to lose time "pretty much everywhere" around the Spa circuit.

A timing gamble during a damp-but-drying final part of qualifying did not pay off for Red Bull, which will occupy the fourth row of the grid.

Red Bull's usual struggles at the power-sensitive Spa circuit mean it has been off the pace of Mercedes and Ferrari in the dry, with Ricciardo struggling more than teammate Max Verstappen and even needing to run again Q1 after a mediocre first lap.

"We've been slow all weekend and, at times, nearly a second off, and not really sure why," said Ricciardo, who will start one place behind Verstappen.

"That was weird and the laps I did were fine, I wasn't going off track or driving like an idiot.

"We just couldn't understand why. Even crossing the line, I'd see the laptime and I'm expecting to see something significantly better and I'm not, so I was a bit confused.

"We put the second set on and we went quicker but still we were even on second set, we were maybe still four-tenths off Max, and the track got better.

"So something's been a bit off, but we haven't really figured out why yet."

Ricciardo said the time loss "seems pretty much everywhere, a bit" but more in the middle sector, which is partly because Red Bull is running an extremely skinny rear wing to try to offset its straightline speed deficit through the faster parts of the track.

Both drivers are running that aerodynamic set-up, with Ricciardo put off a higher-downforce option after trying it in final practice.

"The cecond sector felt better but the first and third was too slow," he explained. "And just thinking about the race and restart, I would get ambushed.

"I don't feel we have a choice but to run the small one we got."

Red Bull's aerodynamic prowess means it should star through the twists and turns of Spa's middle sector, but its usual advantage in these corners is countered by the need to run such low downforce for the straights.

Teams have to strike that compromise every year at Spa, but when asked by Autosport/Motorsport.com to explain how much it hurts Red Bull, Verstappen admitted it was "really difficult" to set up the car.

"I think we found quite a decent way of driving it in qualifying," he said, "but you are compensating for a straightline loss.

"Even in qualifying you are still down on the straight in terms of top speed, with that wing. But I think it's the best we could do."