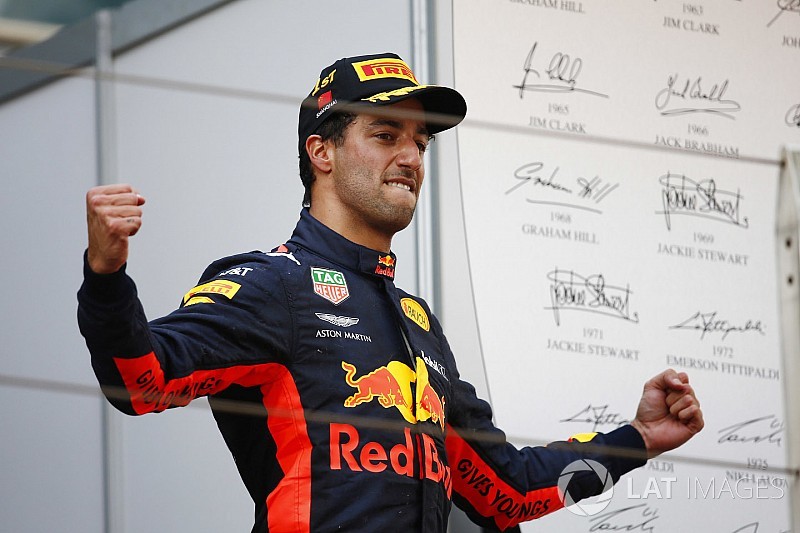 Daniel Ricciardo believes his Chinese Grand Prix victory is worth “50” bad experiences like the disastrous race in Bahrain that left him frustrated at Formula 1.

A bold pass on Valtteri Bottas for the lead capped a stunning charge from Ricciardo after Red Bull opted to pit him during a safety car for fresh tyres.

It came a week after Ricciardo retired from the Bahrain GP on the second lap, and 24 hours after only just making it out in time for qualifying in China following a spectacular engine failure.

“It was awesome,” he said. “We really thought we were going to start the race from the back, just over 24 hours later to be here now… this sport’s crazy.

“A week ago I was with my head down after two laps. Frustrated at the sport, frustrated at all the variables that are involved in the sport.

“Sometimes I questioned why I chose this sport because there are so many other things outside your control.

“It does get you down a lot. But when you have a day like this it’s worth 50 of those bad ones.”

Ricciardo dived in for new soft tyres with 23 laps remaining, while erstwhile leader Bottas and his main challenger Sebastian Vettel stayed out on mediums having passed the pitlane entry before the safety car was deployed.

Ricciardo was not sure he would be able to make them last to the end and only seriously thought he could win once he realised he had “wicked pace”, then went on to pass Kimi Raikkonen, Hamilton and Vettel.

Asked by Motorsport.com about his late dive inside the defending Bottas into Turn 6 to win the race, Ricciardo replied: “Opportunity be knockin’, that’s what I would say!

“At the rate we were going through the field, and I could feel the tyres were holding on well, I was obviously fully set on the win.

“I had pace over all the guys I got ahead but you still don’t want to sit behind for too long.

“I saw Valtteri defend, I’d kind of committed from Turn 3 that I was gonna try.

“I enjoyed it, it makes a bit sweeter than just cruising past on the straight so that was a lot of fun.”

Bottas, who had jumped Vettel by pitting one lap earlier, said he was helpless as soon as he saw Ricciardo had cleared the rest of the field.

“He was closing lap after lap with pretty big gains” said Bottas. “I was defending, obviously saw him very close in Turns 1/2/3.

“From my side there was not much to do, try to defend but ultimately with the better tyres he could really brake quite a lot later and got inside.

“We lost the win in the end, [but] we were still the first car to do the one-stop so that was good.

“Initial feeling is disappointment because the win has slipped away.”