First published in the Autosport magazine 'overtaking special' on 2 October 2014, Formula 1 hero Nigel Mansell talked about his approach to passing and some of his most spectacular moves…

Autosport has produced a standalone special magazine to celebrate its 70th birthday. To order your copy of the 196-page Autosport 70th Anniversary issue, please go to: autosport.com/autosport70th

It’s incredibly flattering for me, later in my life, to have people like Patrick Head and Adrian Newey saying I always gave my all. Christian Horner mentioned that to me as well – he said he was a huge fan. People knew that whatever car I was driving, whatever place it came in the race, I couldn’t get any more out of it.

In our day, because we didn’t have aids like the DRS system, overtaking was far more important. You had one or two opportunities a race, and if you planned it and executed it, you could pull off something quite quickly, and you didn’t lose time.

If you got it wrong, it could mess up your whole race, whereas today if you get it wrong on one lap, or half way through the lap, if you’ve still got DRS on the next straight you can still get it done within the same lap.

It was like a chess game to me – which meant planning ahead. Planning ahead and then doing literally spur-of-the-moment decision-making, so when something presented itself you were actually ready for it, as opposed to being left thinking, ‘Oh, I could have done that’. 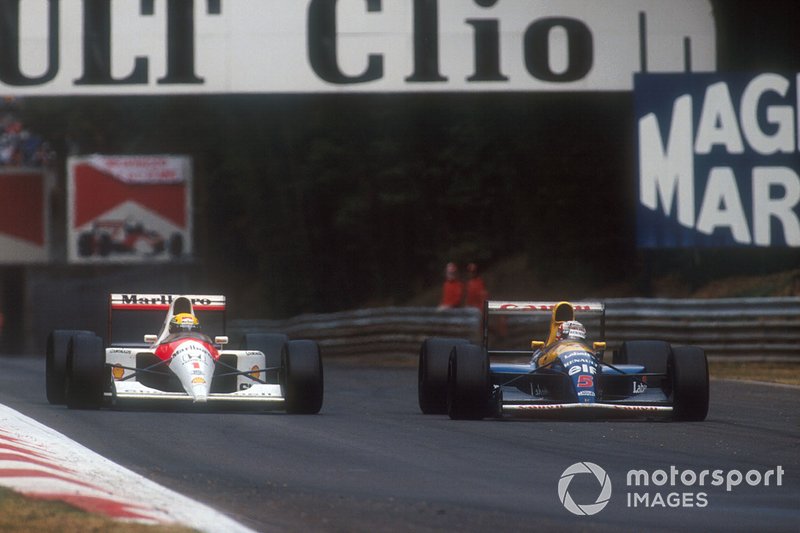 A great saying in motorsport is, ‘If ever you have to think, it’s already too late!’ Some of it was instinctive, and some of it was a case of ‘if you do it a few times, you get better at it’ as well.

You have to have an incredibly healthy respect, and the great thing with the best racers is that even when they know they’ve lost the corner they don’t give it up until the last possible moment. And then that’s when accidents can happen, because unless you realise they are going to pull out, there is going to be contact.

There’s no question that Ayrton Senna was exceedingly good at overtaking, as was my Williams team-mate Nelson Piquet, and Michael Schumacher. There were a number of drivers who could hustle the car and put it in there. 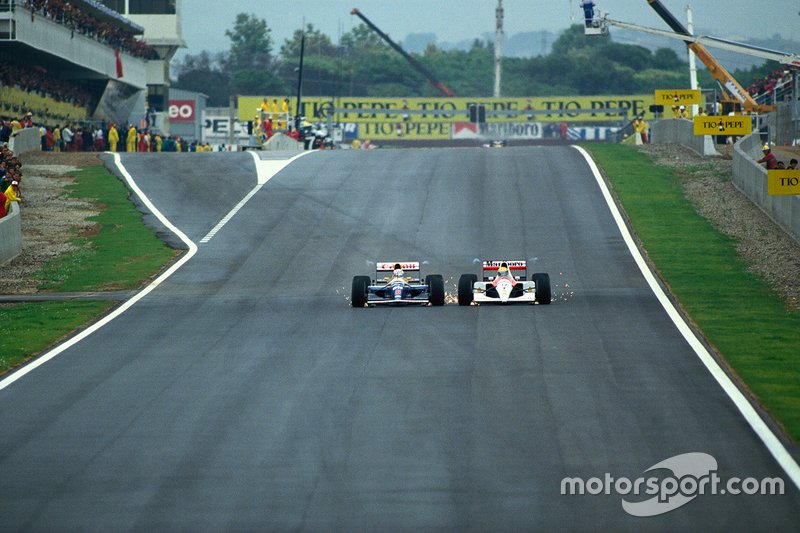 When you have a driver who’s incredibly skilful, and actually thinks that they can’t get hurt or don’t have the respect that it’s a very dangerous game, then sometimes it leads to some really bad accidents.

We rewrote the overtaking on ovals in America, and people were saying you can’t do this and you can’t do that. Until proved otherwise, you can do anything, really. Overtaking on the outside of any car at very high speed is an incredible manoeuvre. What you have to do is make sure that you give them enough room, so they don’t just nudge you straight into the wall. 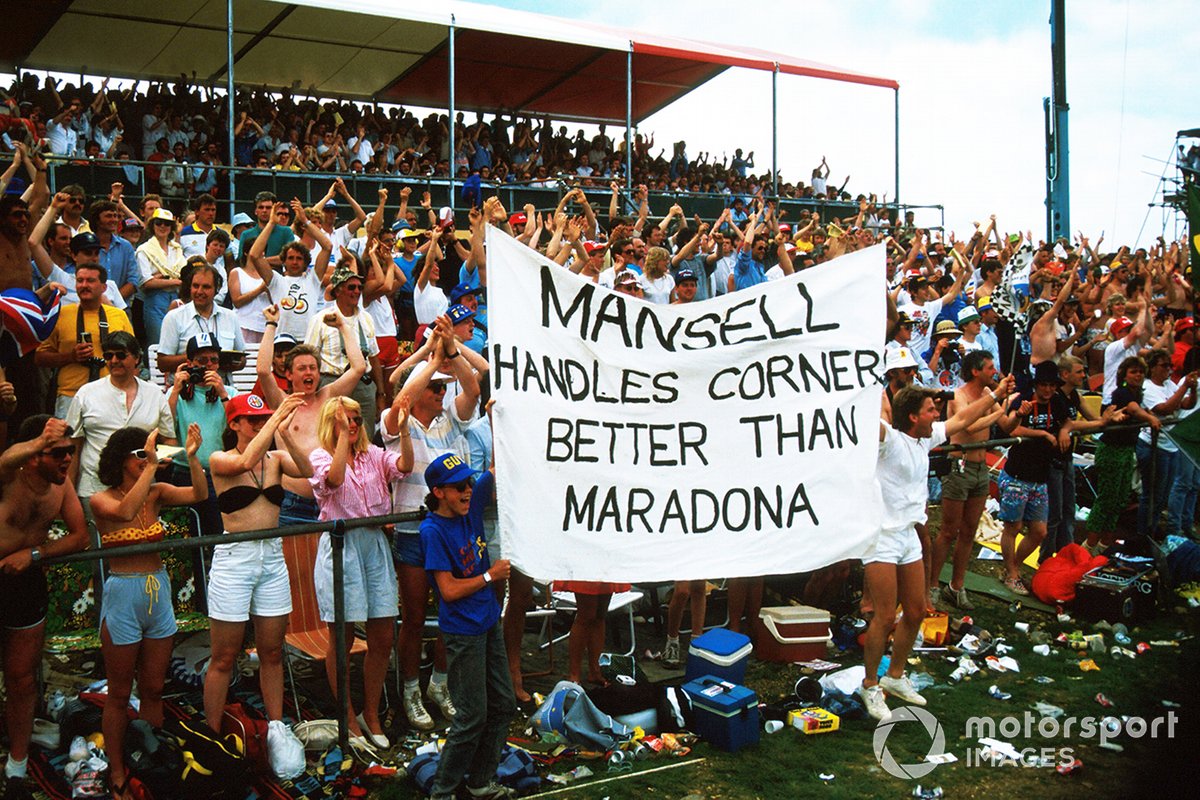 Fans show their support for Nigel Mansell, Williams with a banner

The perfect example of planning ahead was the 1987 British GP, and knowing my team-mate Piquet only too well.

I knew when I caught him – and basically I caught him with a few laps to go – that if I was really lucky I’d have one chance to execute something. And if I didn’t get it right the chances were that my tyres would be completely gone, and basically I wouldn’t get another opportunity to win the race.

Lap after lap I planned it and watched how he was driving down the Hangar Straight, and then came up with a plan that, fortunately for me, worked.

It’s an easy one to use as an example, because people could see, lap after lap, what was going to unfold, and they could see there was one chance or the race would be over, and if I screwed up and lost momentum it wasn’t going to happen. 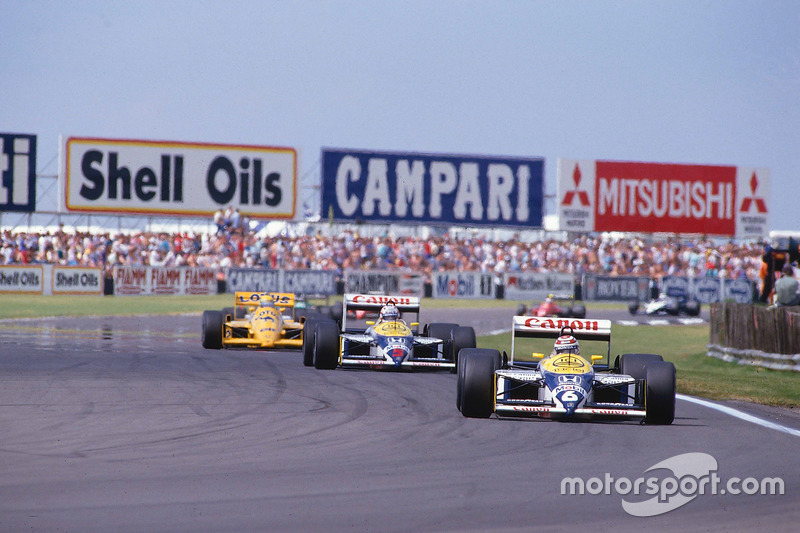 People remember Hungary in 1989, with Ayrton – blocking him in with Stefan Johansson was brilliant. We were hunting him down, and the thing was backmarkers didn’t have to get out of your way like they are obliged to now, they just sort of couldn’t deliberately hold you up.

It was very rare that Ayrton put himself in a position that he just got a little bit too close and, before he knew it, there was nowhere for him to go, because I’d boxed him in behind Stefan. That was probably one of the most tremendous, spontaneous moves that you could possibly have, so that was very satisfying. 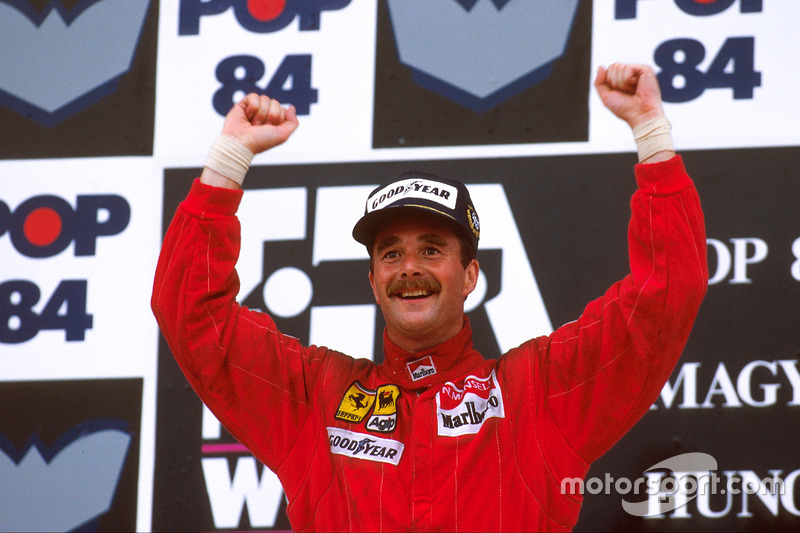 I had to hang on pretty tight, and I put myself in his place and said to myself, ‘These next few laps are going to be dynamic, because I know how upset he is with me!’

Mexico with Gerhard Berger in 1990 was played out a different way. I was sitting there, not terribly happy because I wasn’t very quick down the straights, but we won’t go into that.

I was just about to turn into the first corner at the end of the main straight and I saw this car all locked up, smoke coming off the tyres, on the inside. If I’d turned in at that point then I would have been T-boned, and we would have both been out of the race.

And so I turned away from the corner, which is not what you want to do when you’re racing. I actually turned left instead of right. And he came steaming down the inside, unlocked his wheels, went round the corner, and got into second place.

I had to have a fight to hustle the car to get back behind him, and I was absolutely furious with his driving. I said to myself there is no way he is going to take second place from me. 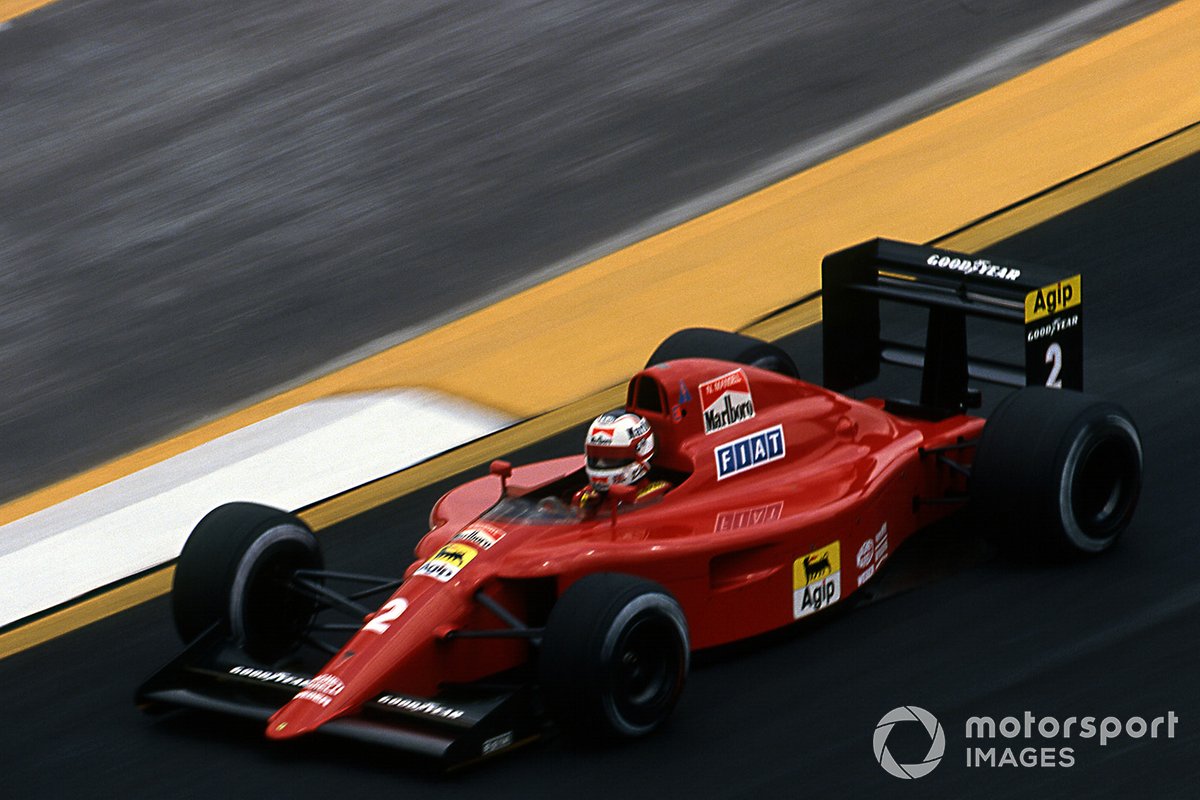 I didn’t really plan going around the outside of the Peraltada. That was one of my worst-ever overtakes, because it was what I call a totally ‘shit-or-bust’ move. It wasn’t a clever one, because if anyone had got really hurt it would have been me – I was on the outside. It’s not the place to go off there, because it was a very dangerous corner.

But it was fantastic. It was just, ‘He’s not going to do this to me’, and I was very indignant about it. It’s not very often that you go in and, just for one lap, you’ll trust the car and keep your foot in, and just try to find that extra grip.

I still had a lot of adrenaline when I came in, and everyone was coming off the pitwall and out of the garages and clapping me in. I honestly thought for a happy moment that Alain Prost must have stopped and I had missed him on the slowing down lap, because it felt like I had won the race. 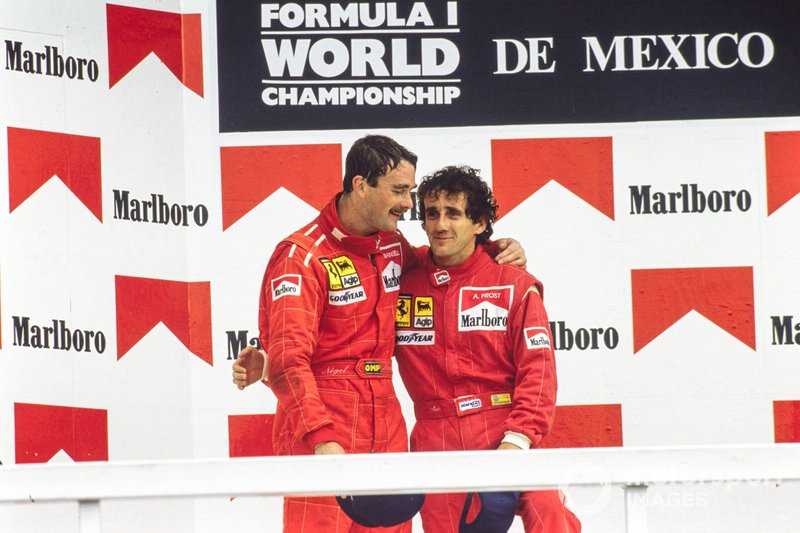 It was the most incredible anti-climax when I pulled up and saw Alain there. It was, ‘I haven't won the race, so what are they doing?’ I had to revisit what I’d done, and it obviously impressed them!

Some other memorable moves

Another memorable move was on the outside of Alain at Magny-Cours, but for me one of the most famous ones was coming out of the Monaco tunnel and down the inside of Alain into the chicane, in 1989.

I remember Alessandro Nannini and me at Silverstone in 1988, with the Judd-powered Williams. That year I had two second places, and nearly all the rest were non-finishes. There were some amazing overtakes in that race.

As for defending, I could keep people behind when I wanted to. Perhaps not as ruthlessly as a couple of other drivers I won’t mention!

Going back to 1981, when I was on the podium at Zolder with Carlos Reutemann and Jacques Laffite, that race was sensational. To have Gilles Villeneuve breathing down your neck the whole race was an uncomfortable feeling, because you knew he would never give up. 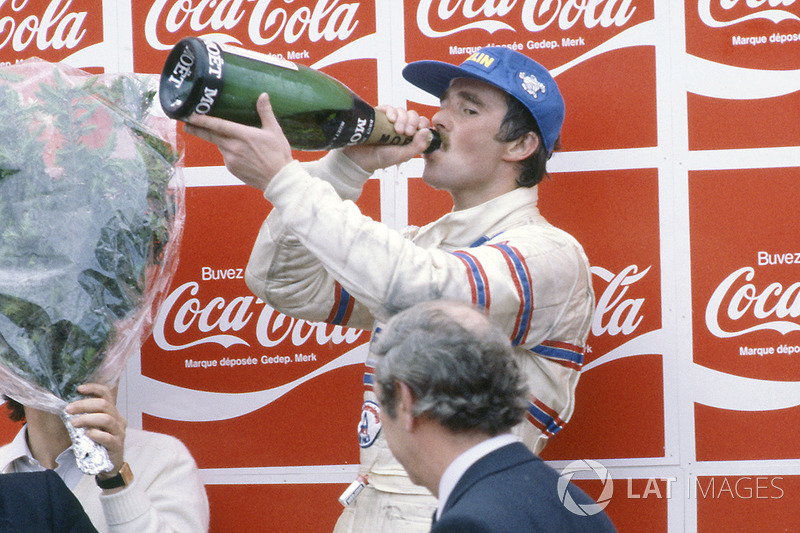 The thing is now it’s very different times, because when a car is 15, 20, 25km/h quicker with DRS open you can’t defend, can you? You just get passed. Now it’s just a different time, in terms of safety, thanks to the FIA and the teams. I think the tracks win the day in terms of having such good runoffs, with the engineering of the cars a close second, and how far the driver’s legs are behind the front axle, the dispersion of the energy and so on.

When you have cars go in as hard as Felipe Massa’s Williams and Sergio Perez’s Force India did in Montreal in 2014, and they walk away, it’s a great testament to the engineering feats and the new track designs.

I think today some of the drivers think it’s a sport that you can’t get hurt in any more. You see cars somersault and turn over and do all sorts of crazy things – look at Mark Webber in Valencia a few years ago. In the past that would have been it, but he walked away.

I think the drivers are able to push the limits knowing that on some fast corners the worst that’s going to happen is that they run wide, they come back on the circuit, and lose a second. And then they complain that the runoff doesn’t have much grip! 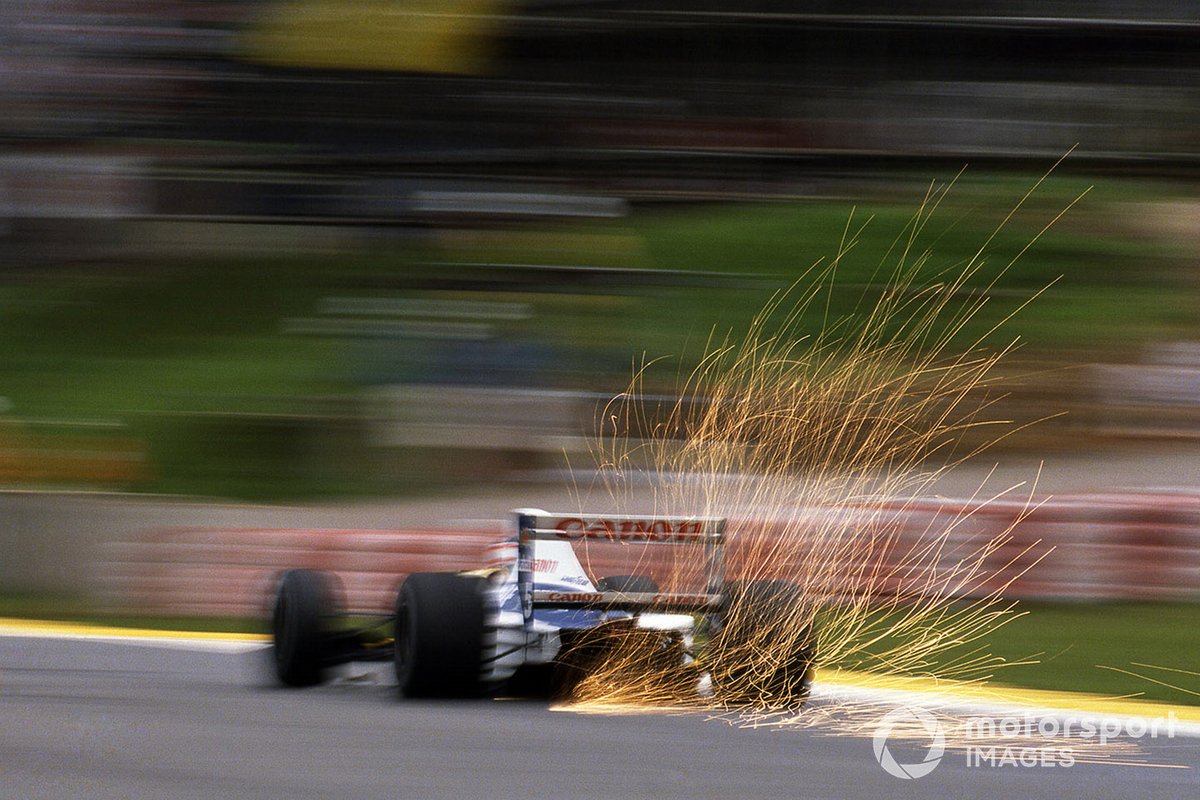