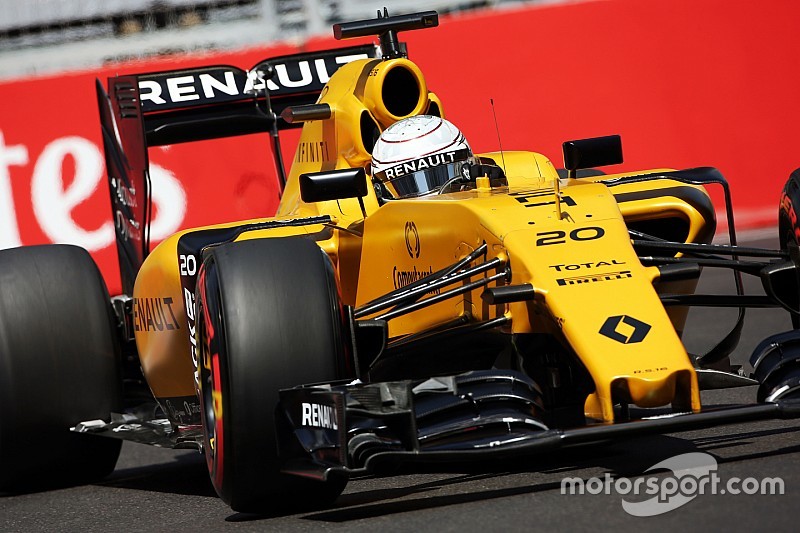 Drivers Jolyon Palmer, Kevin Magnussen and Renault technical staff share their thoughts on the challenges of the Red Bull Ring, with the R.S.16-R.E.16 package.

The last three races have been harder than expected, possibly more difficult than we anticipated at the start of the year. However nothing changes our long-term objectives; we just need to re-assess how we get to them in the short and mid-term. We have already introduced our power unit upgrade and we know that this is one of the strongest parts of the car at present.

We have also taken some steps in mechanical grip and balance and both drivers are happier with the car behaviour. With our strengths identified, it is much easier to work on our weaknesses. In particular we need to target improvements in qualifying and aero, and we have a plan for both of these areas . Every race is an opportunity to learn more and to keep taking those steps to be where we want to be by the end of the season.

After a trio of street courses it’s back to a permanent track with the picturesque Austrian Grand Prix, something Kevin Magnussen is particularly looking forward to.

How are you looking forward to the Austrian Grand Prix?

I’m particularly looking forward to it. Austria is more my type of country, with the fresh air and mountains. It’s great to be away from a city for a Grand Prix and the circuit itself is really good. It’s small, but it’s high speed. It has a really nice flow and there are good opportunities for overtaking – like into turn two. I like it.

You’ve raced there before; what were your thoughts?

I had a decent race and qualifying there in 2014 so there’s nothing bad I can say about it. I’m headed there in a very positive frame of mind and I can’t wait to get out in action.

How do you sum-up your Baku weekend?

We learned a lot in Baku. We tried a variety of set-ups and did make progress in our understanding of the car. My car wasn’t too bad in the race and we made the best of our opportunities. Obviously, we all want stronger results but we all knew this would be a tough season where we’d have to dig deep and work hard. Ultimately we’re here for the long term.

We should be more on it in Austria, which is a faster circuit and should suit our car a lot better.

After a tough weekend in Baku, Jolyon looks forward to the challenges of the high-speed Red Bull Ring.

How would you review Baku, one week on?

Actually I feel very positive about the overall Baku weekend, even though I don’t have a lot to show for it! The yellow flags in qualifying cost us a lot and then I made some mistakes in the race. The crux of my problems came in turn one: I got a good start, but then locked up and flat spotted the tyres under braking for the corner. This meant I had to do another pit stop, without which I think we could have been a bit higher up and ahead of both Haas cars. But on the whole the car was OK and we are making progress.

Yes, I’m looking forward to getting back into the European heartland. Unfortunately we were not that competitive in Baku but we should be more on it in Austria, which is a faster circuit and should suit our car a lot better.

Do you enjoy racing on the track?

The Red Bull Ring is quite a simple track, with just seven corners. Putting a good lap together is very important as the lap times are very close and any mistake can really hurt. I like that though, as the driver can make more of a difference. There are some bumpy zones and some overtaking possibilities, such as turn one and turn two. There are some fast corners as well, including the second-last corner that is pretty quick. Then the last corner has a bit of camber and you need to carry the speed through. I raced there in 2014 in GP2 and I drove in FP1 last year. It’s a lot more fun in an F1 car as there are more straightlines and the tyre deg is very low so we can be flat out the whole race.

Austria should be better for a variety of reasons.

Racing Director Fred Vasseur reviews the first GP in Baku and anticipates an improved performance in the hills of Austria.

Azerbaijan appeared to be another tough weekend for the team, but you seemed quite upbeat after the event. What were the positives?

The weekend was difficult, especially qualifying, and we have to recognise that we didn’t get it quite right. We did however recover in the race. While our race performance wasn’t excellent, it was more or less in line with our objectives and expectations. We have to thank both the team and the drivers for keeping their heads down, but now we need to get back to a situation where we are in a position to score points and this includes doing better in qualifying. Baku was a bit of a one-off though; a street track that was very quick and everyone experienced problems. When we go back to something more traditional, we need to find our rhythm from the start of the weekend from qualifying through to the race.

As you say, qualifying seems to be the team’s Achilles Heel at the moment. What deductions have you made about this and how will you address it?

I think Baku was just a one-off. If you look back to Barcelona, this is more representative of where we are. We need to manage the weekend well from the start to the finish, making the right strategic decisions to have an approach that is more global and consistent between Saturday and Sunday.
The drivers hustled the car round the track – are you happy with their performance and attitude?
The job is harder when you have weekends like Baku, but the drivers are part of the group, just like the engineers and mechanics, and know what they need to do to have a strong weekend. In Baku they did a good job to fight with the other teams and motivation should not drop just because we have had two hard weekends. I have confidence in them and we need to get a dynamic to get into the groove right from the start of the event.

Austria is a fast, flowing track – do you think this type of track suits the R.S.16 better than the tighter street tracks?

Yes, we suffered in the slow corners in Canada and Baku. Austria should be better for a variety of reasons. I think we are making progress as a team and I hope we can move forward race after race on the more traditional circuits towards the level of performance we saw pre-Monaco.

It’s good to leave the city

After a trio of tracks that have not played to the R.S.16’s strengths, Chief Technical Officer Bob Bell looks to the permanent circuit in Austria to enable more pleasurable performance.

What’s the outlook for Austria?

It’s an important race for us as the low-speed corner circuit layouts we’ve seen recently haven’t suited us. Austria’s much more in the R.S.16’s comfort zone. We left the Barcelona test feeling quite positive, and since then we’ve added the positive step of the B specification engine, but the circuits we’ve visited subsequently have really caused our progress to falter; that’s something we must address.

What are the challenges in Spielberg?

It’s an interesting track. It has a relatively smooth surface so tyre warm-up could be a bit of an issue, and it’s cooler as it’s higher, which also has a small effect on the engine. Average corner speed is a bit higher, and there are not so many corners. It does have some high speed content so you want a car that also has good high speed balance. This higher speed content should suit us; as we’ve seen from the previous three races we do have a weakness in the low speed corners so it’s good to get away from them!

Any other areas to be aware of?

Despite a higher speed, it is actually quite heavy on brakes, so you have to be vigilant with brake temperatures and ensure sufficient cooling. We’ve been quite aggressive with our tyre selection, opting for the ultrasoft tyre and we’re predicting that it’s likely to be a one, possibly two stop race.

Why has the R.S.16 struggled with low speed corners?

It’s partly a function of downforce, and that simply goes back to development time. We’re also looking at braking stability, so front locking into a slow corner has an impact on pace. For entry instability taking out front wing helps, but then the playoff is more mid-corner understeer possibly driving snappiness on exit. Traction’s another challenge. These are things we can fine-tune with weight distribution and mechanical balance for example, but ultimately the more downforce you have the more these type of issues go away.

Qualifying was clearly not great. We made some relatively large changes in set-up to try to get a handle on some of the challenges at what was a very distinct circuit; it wasn’t a case of fine tuning. Jolyon liked the set-up he used for qualifying – this was softer to enable the car to ride the bumps and kerbs better which was an area where we’d been weak at the start of the weekend. The playoff however was that the car then becomes somewhat lazy in change of direction so it doesn’t feel as sharp. Kevin wasn’t so happy with his car after qualifying and went for a stiffer set-up for the race which he preferred. We learnt a lot on the set-up possibilities and which direction we need to go.

It was a pretty aggressive strategy from Kevin with an early single pit stop then a long second stint on the soft tyre?

It was an aggressive strategy but one that delivered better than the alternative. If we’d managed to get a few more quick laps from Kevin’s soft tyres we could have been just off the points.

Did the race play out as expected?

Looking at the GP2 Series races and the Formula 1 sessions it was a reasonable expectation that there could be safety car periods and certainly more retirements than we actually saw. Our drivers perhaps erred on the side of caution to ensure they were there at the end of the race and benefit from any over exuberance elsewhere. This could have worked well, however it looks like the rest of the grid were following the same philosophy so we didn’t see the race we expected in that regard.