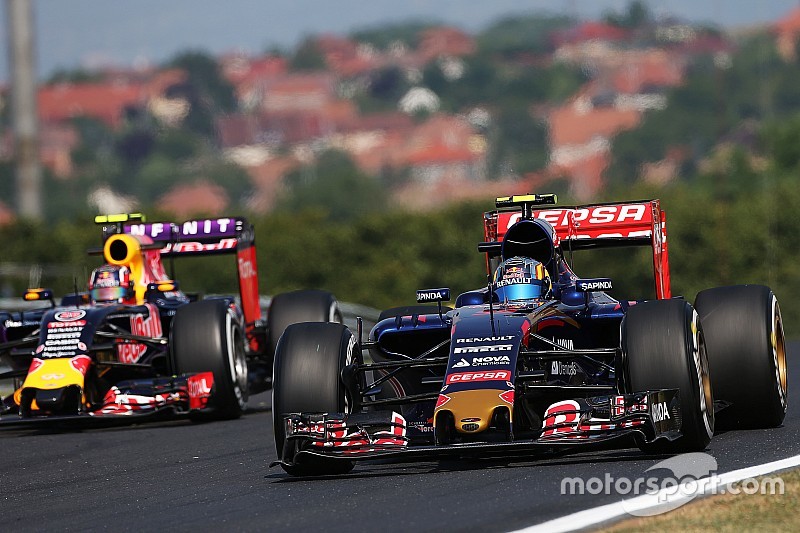 Renault will not introduce any power unit performance upgrades before October's Russian Grand Prix in Sochi, according to Red Bull boss Christian Horner.

That means the Red Bull and Toro Rosso drivers will have to get through Spa, Monza, Singapore and Suzuka before they see any improvement in performance.

Renault still has 12 development tokens, and the company is expected to use them to produce a revised V6 and turbo, but which will now be available only for the final five races of the season.

"I don't think anything is scheduled now before Sochi," said Horner. "That probably is the earliest that we're going to see any development or use of the tokens. The engines that we've got at the moment are what we're having to live with for the time being."

An engine failure in today's practice has left Daniel Ricciardo with only one usable V6 to use.

If he needs another one before Sochi he will take a grid penalty and will also be stuck with the current spec, unless he takes a further penalty in Russia or beyond in order to get the upgraded engine.

"Engines four and five are what the drivers have been using between Friday and Sunday racing," added Horner. "Unfortunately Ricciardo has now lost engine four, so he's only got engine five that came into service for the first time in Austria to get him through the next few races.

"Only time will tell as to whether we can get to Sochi or not without incurring another penalty before introducing an upgraded unit."

Despite the problems, Horner insisted that Red Bull would still be with Renault next year.

"Renault would be the first to admit that they are not at all happy with where performance and reliability has been with this engine. They are making progress, they are making strides.

"The problem with engines is that unlike the chassis they are long lead time items. Renault have got strategically some decisions to take over the coming weeks in terms of the direction they want to go, not just for 2016 but beyond that.

"We have an agreement with Renault to the end of next year, and of course as a partner we're expecting them to enable us to run in a competitive manner. In order to do that we need a competitive engine. Of course Renault need that more than anybody as well for both their customer teams."