Renault Formula 1 boss Cyril Abiteboul says the team always expected its gap to Haas to vanish like "an ice cube in the sun".

Over the last six races, Renault has scored 26 points to Haas’s 57, and the two teams now stand on 82 and 76 respectively in their battle for fourth place.

The Enstone team endured one of its worst weekends of the season in Belgium, with both drivers going to the back of the grid after power unit changes, and neither scoring points.

Nico Hulkenberg crashed at the first corner, while teammate Carlos Sainz struggled home in 11th place. It was only the second time in 2018 that the team failed to score.

“Frankly we were assuming that this gap would disappear like an ice cube in the sun,” Abiteboul told Motorsport.com.

“We knew since day one that Haas is very competitive, and actually it’s quite the opposite, we are lucky that we are still ahead. It gives us the opportunity to keep on defending until Abu Dhabi.

“We know that we have another challenging track in Monza, but let’s see. We have quite a lot to come in terms of development on the chassis, but I expect the predominant factor is going to be engine competitiveness.”

Abiteboul admitted that Spa was always going to be a tough weekend, made worse after a poor qualifying saw Sainz take an engine penalty and join Hulkenberg at the back of the grid.

“We decided to focus all the grid penalties that we needed, and hopefully there won’t be any more to come, and there will be more straightforward races in the next eight rounds.

"It was scheduled [for Spa] for Nico, it was scheduled for Monza for Carlos, but because of what happened in qualifying, which is still not explained, we decided to do that here, and now so it’s out of the way." 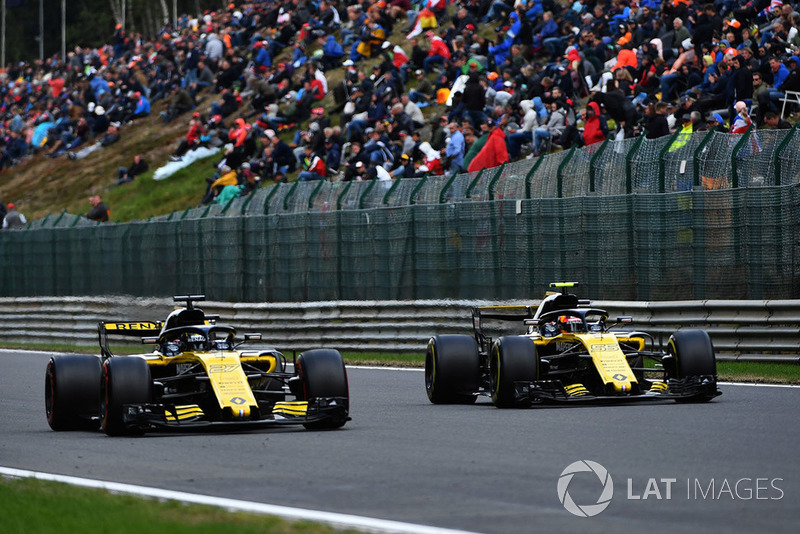 Abiteboul insisted the first-corner mistake was not typical for Hulkenberg, who was given a 10-place grid penalty for Monza.

“I think he accepts that it has been a misjudgement from his side, coming also from the fact that when you are starting from so far back – the fact that he simply braked too late and it didn’t work out, also the fact that he was very light on downforce.

"FP3 didn’t really work as planned and he had not enough running in qualifying.

“So all of that sort of led to a wrong judgement from his side. But he’s not this type of driver, we all know that he’s extremely focussed, and we’re sure he will learn from that mistake.”

Sainz took a gamble by starting on medium tyres, but it didn’t pay off.

“I think Carlos has made the most of today’s circumstances," Abiteboul said. "It was very challenging, to start from so far.

"We tried something with the tyres which didn’t work, also on the basis of the early safety car caused by ourselves, his teammate, which didn’t help – so it’s a bit ironic! These things happen.”

Gasly: Start tyre choice kept me out of Spa pile-up