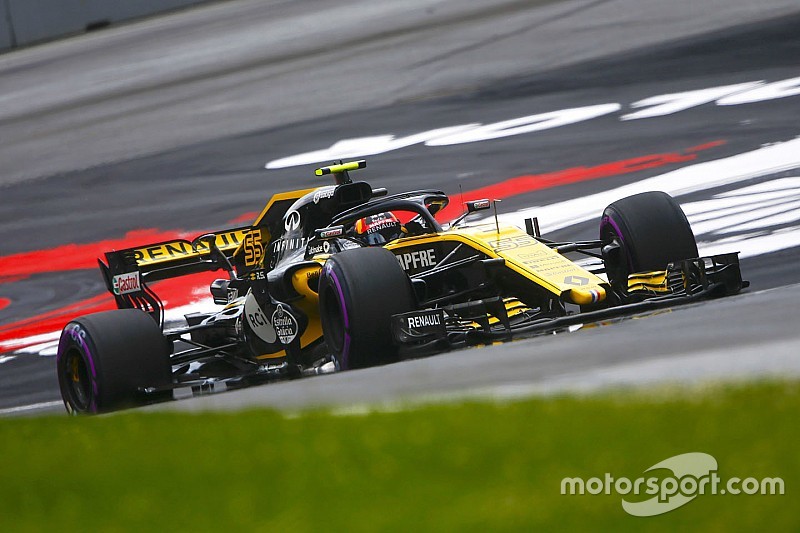 Renault's Formula 1 drivers have played down the impact of the new high-power engine mode used in qualifying for the Austrian Grand Prix.

The new mode was tested in France last week and Renault F1 boss Cyril Abiteboul said it was "great news" that it would be "making an impact for the first time" at the Red Bull Ring.

After filling the fifth row of the grid, well beaten by the Haas team, drivers Carlos Sainz and Nico Hulkenberg said it made little difference to their qualifying performance.

Hulkenberg lapped three tenths slower than his teammate and said "you don't notice a bit more performance" like a qualifying mode.

"Something more significant needs to happen, so that it can be noticed," he said. "I don't even know what you're thinking, or what you've been told, what we've got.

"That's not earth-shattering, I can tell you that much."

Asked by Motorsport.com if he had used the new mode, Sainz said: "Yeah, but everyone has qualifying modes.

"Once you arrive to qualifying, yes it's a bit of performance, but we were certainly very far away from Haas to feel any kind of qualifying mode advantage."

Further up the order, Renault customer team Red Bull lagged 0.7s behind Mercedes and Ferrari despite this circuit offering a short 63-second lap in qualifying.

Daniel Ricciardo was even beaten to sixth on the grid by the Haas of Romain Grosjean.

Renault's chief technical officer Bob Bell had already warned after Friday practice that he would not "describe our qualifying opportunities as a party mode, probably not quite in the same league as previously run at other engine manufacturers".

He added: "We have some improvements to the engine that come on as a race-by-race basis.

"We are always finding new ways with these engines to operate them, to get a little bit more performance. Renault have been a little bit behind the curve on that but we are starting to pick it up now.

"We have a small improvement but it is not night and day stuff."

Bell said Renault would be refining its higher-power modes over the course of the season.

"There are some modes that we can develop over the course of the season that will be available to us on all laps, some you might only want for two or three laps and you will only use them in qualifying," he explained.

"Those limitations can themselves change over the course of the season.

"As we get more confidence in a new operating mode, as we get more validation data from the track, we may open up the mileage restrictions on them.

"So we may start conservative and then open the window up."