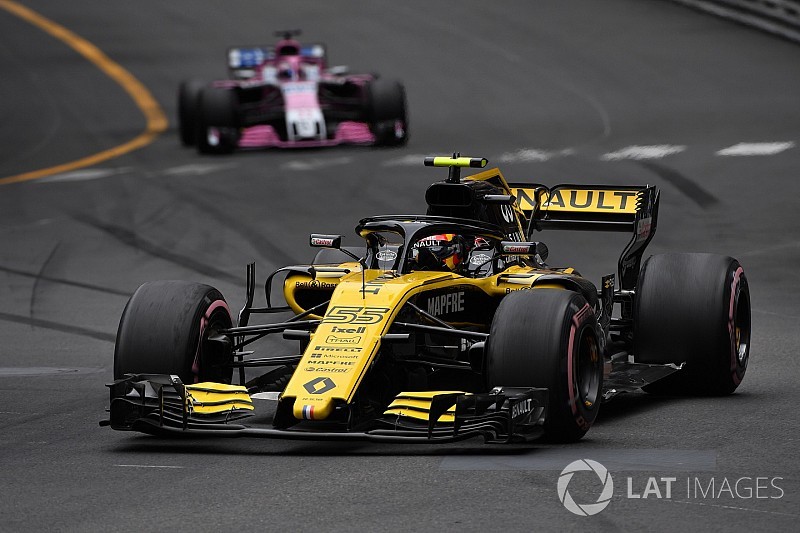 The Renault Formula 1 team has defended the strategy that left Carlos Sainz feeling "very bitter" after the Monaco Grand Prix.

Sainz questioned Renault's decision to fit ultrasoft tyres at his sole pitstop during the Monte Carlo F1 race, after he regressed from eighth on the grid to finish a distant 10th.

Sainz finished more than 40 seconds behind teammate Nico Hulkenberg, who started outside the top 10 but was allowed through by Sainz as the Spaniard struggled for speed.

Sainz was convinced he should have gone to supersoft rather than the ultrasoft tyres at his stop, given there were still 62 laps to the flag, and suggested the team was too optimistic with its predictions for tyre performance.

"I think moving to supersoft rather than ultrasoft would have been even worse towards the end," Abiteboul said.

"It was a very difficult race for him, he also had to let Nico past, so Nico could execute his race.

"We saw again that it's so difficult to read into these tyres - it was looking like we were going to have a very, very difficult race with Nico, and suddenly the tyres came back to life.

"It's so difficult to appreciate what's going on in that situation, but I'm sure when he [Sainz] will watch the race in reply he will understand.

"But again we will have a discussion, and the team needs to appreciate what he's done, and we need to keep that in our heads for the future.

"There is more to learn and to understand from this type of situation."

Regarding communication problems the team experienced with Sainz during the race, Abiteboul added: "I think his microphone was just dead - it happened earlier this week, so there is something to be done.

"He was not switching off his microphone - he's not that type!"

The two Renault drivers were on different strategies thanks to Sainz being committed to starting on the unfancied hypersofts after making Q3, while Hulkenberg started on ultrasoft and ran much longer in the first stint thanks to qualifying outside the top 10 and having free choice of tyres for the start.

"We could see that with our cars and those tyres it was better to start 11th than start P10, or even P8 for Carlos," Abiteboul said.

"That's also a factor for our car, because for some cars, like [Pierre] Gasly [Toro Rosso], like [Esteban] Ocon [Force India], they managed to make that strategy [of starting on hypersoft] work.

"We had no real alternative other than that strategy for Carlos."

Toro Rosso played "a bit of a game" in Monaco - Leclerc