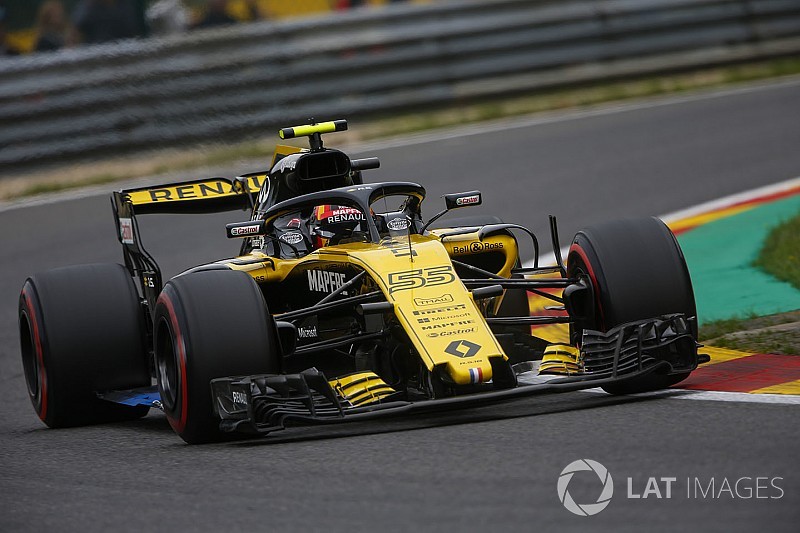 Renault is considering making major set-up changes to Carlos Sainz's car overnight after ending up mystified by the handling problems that blighted his qualifying session in the Belgian Grand Prix.

Sainz could only manage 16th place after struggling with a poor balance in Q1, so he was not able to progress to the next session.

However, he will gain two grid spots as both his teammate Nico Hulkenberg and Valtteri Bottas have grid penalties.

Sainz said that in the immediate aftermath of the session, his team couldn't get to the bottom of the problems he had faced.

"We don't know yet," he said. "We clearly see that the car has nothing to do with the car that I've been driving until pretty much the end of P3, when we thought we were more or less the 10th fastest or 11th fastest car on track.

"We were optimistic heading into qualifying. As soon as I did the first six or seven corners I felt the car was nowhere near to the balance I had all weekend, a lot of oversteer, no stability, a lot of snaps per lap, very scrappy, difficult to put any decent kind of lap together.

I kind of expected it to get better on the second run but it actually got even worse. So we're still analysing it."

When asked by Motorsport.com if the team was considering a pitlane start after making wholesale set-up changes, he said: "Maybe, it's being discussed. It's under investigation."

Asked if something might have broken, he said: "We're looking into it. It's very difficult to say or to tell with so little time after qualifying.

"The only thing I know is the car had nothing to do with the rest of the weekend, and like this it's very difficult when you start a push lap in Q1 to put any kind of good lap together."

Sainz was particularly disappointed because the new floor introduced by the team on Friday had worked well.

"It felt like a positive step yesterday, the balance I had today doesn't allow me to say the same, but yesterday when I changed floors and ran it in FP2 if you look into my short run and long run pace it did look really promising.