Renault can target Haas in second half of 2016 – Palmer 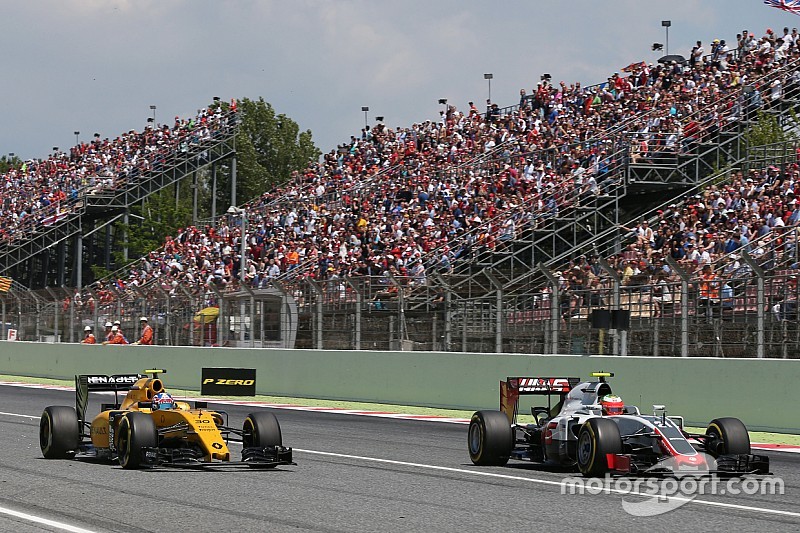 Renault driver Jolyon Palmer believes that the French manufacturer can aim to eclipse Haas during the second half of the current season, as it continues to work on improving its current car.

On its return to Formula 1 as a works outfit, Renault has scored just six points in the first 10 races of the year, all of which came courtesy of Kevin Magnussen’s seventh-place finish at Sochi.

Magnussen’s teammate Palmer has still yet to score any points, his best finish of the campaign so far coming in the season-opening Australian Grand Prix, where he took 11th.

It means the Enstone-based team is down in ninth in the constructors’ standings, 22 behind the Haas squad in eighth.

But Palmer believes the fact that Renault is still focusing mainly on improving its current car, while others shift their attention increasingly towards 2017, gives his team an opportunity to move up the grid.

“I think the ones we need to catch first are Haas,” said the Briton. “They’re the ones just making Q2 and we’re just behind them.

“If we can catch Haas, then that’s Q2, hopefully we’ve got more upgrades than they have for the rest of the year and we can do that.

“Then maybe Toro Rosso are falling away a bit from the group in front, they’ve got the old engine as well, so maybe we have a chance to catch them.

"The tracks [in the second half of the year] can hopefully suit us a little bit better, I’m improving all the time as a driver, so I hope for some points.

“It would be nice to have some more meaningful battles on track, because a lot of the time we’re fighting a Manor or a Sauber, and no-one sees that.”

Asked if Renault’s lack of competitiveness was making him concerned about his chances of remaining in F1 next year, Palmer said he feels he is driving as well as he has done all season.

“I feel fine, I think I drove better at Silverstone than the rest of the year, keeping the upward trend. I think the team can see that as well,” he said.

“At the end of the day I just have to try and do my best, show what I can do and get the most from the car. The whole team is focused on improving the current situation.”

Vandoorne: "Other options available" if McLaren doesn't pick me