Renault aims to go on "attack" after Hungary showing

Renault says that a step forward in form at the Hungarian Grand Prix has lifted hopes that it can go on the 'attack' against the teams ahead of it in the second half of the campaign. 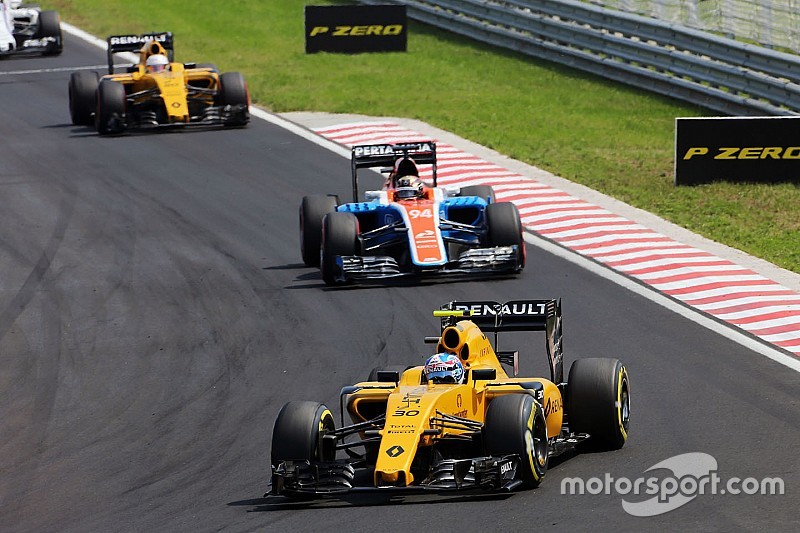 Jolyon Palmer just missed out on scoring his first points of the season after a costly spin at Turn 4 at the Hungaroring, but the fact that the team was able to battle for the top ten was hugely encouraging.

Renault F1 managing director Cyril Abiteboul said: “In Budapest we demonstrated that we had taken a tangible step forward, not just in our own performance but in relative performance to our rivals.

“In the race we were able to out race Haas, Sauber and even Force India, and Jolyon was just a sniff away from his first points.

“Now the task for Hockenheim is translating the extra pace we’ve unlocked into the points we just missed in Budapest. We’re making progress and the benefits of a strong result in the German Grand Prix would be welcomed by everyone at Enstone and Viry.

“For the rest of this season, our goal is to attack the teams ahead, using new aero parts developed since the beginning of the season and marginal evolutions of the engine to stay in the same pace as our competitors, despite our focus on 2017.”

Renault ran through some important suspension tests at the post-British Grand Prix test, and technical director Nick Chester believes that a better understanding of setup is paying off.

“We have found quite a lot of this pace in the car both from new components and from different approaches to set-up,” he said. “We learnt a lot at the Silverstone test and this is filtering through.

“We’re certainly getting a better balance with the car to use the tyres more efficiently and we’re also making improvements in low-speed and medium-speed corners. The race pace showed that FP3 was not an illusion.”

When asked if he felt there was more to come, he said: “We have further advances in the same direction.

"There are a few more parts to go on the car and we’re learning at every race so we would like to see some further improvement."