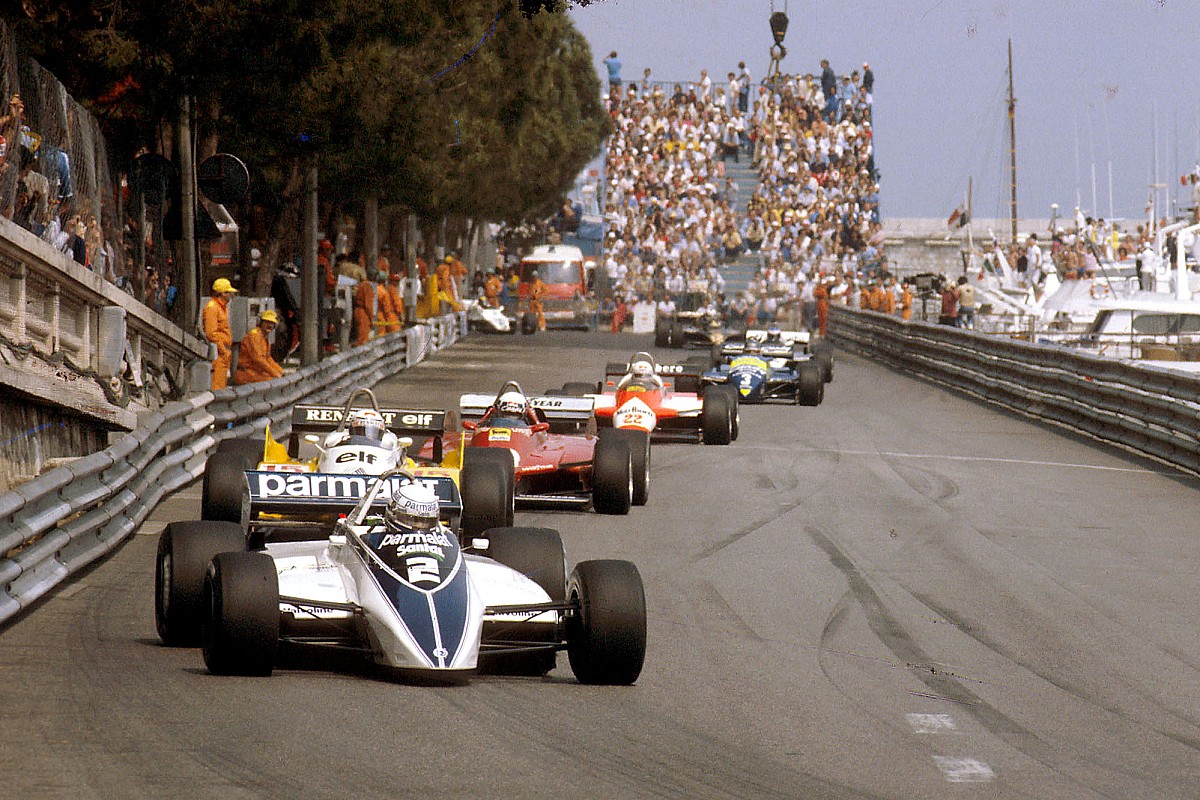 Canada 2011 and Brazil 2019 are often regarded for their crazy finishes, but none were quite as mad as the "real strange one" in Monaco in 1982.

"A real strange one," is how Autosport's Nigel Roebuck opened his report for the 1982 Monaco Grand Prix, offering a fitting precis for a chaotic race with a chaotic finish.

It is widely remembered as being the race that nobody wanted to win. Monaco, the jewel in the crown, the one trophy all drivers would surely covet above all others, was there for the taking.

And in the space of the final three laps, the lead changed hands four times, leaving just five cars running at the chequered flag in what must be regarded as the craziest race finish in F1 history.

The F1 paddock had arrived in Monaco under a cloud following the death of Gilles Villeneuve at Zolder two weeks earlier. Ferrari opted to enter just a single car for the race, with Didier Pironi qualifying fifth.

Eager to score a victory to dedicate to the late Gilles, Renault driver Rene Arnoux scored pole on Saturday, and quickly forged a decent buffer to the pack in the early part of the race. The Renault RE30B looked a step ahead of the other cars, allowing Arnoux's teammate Alain Prost to move into second early on with a pass on Riccardo Patrese.

Arnoux was able to streak clear of the field in the early stages of the race, building a seven-second gap before losing control of his Renault on lap 14. A slide coming through the entry to the Swimming Pool chicane caused Arnoux to stall, leaving him helpless at the side of track and out of the race.

It handed the lead to Prost, with Patrese's Brabham keeping him honest just a couple of seconds behind. A number of other drivers were getting caught up in incidents further back, including Pironi, who was now driving without a front wing. Contact while trying to lap Elio de Angelis left Pironi's car with damage but still able to continue, even if out of touch with the leaders.

With Pironi seemingly out of contention, Prost managed to put the hammer down entering the final 30 laps of the race to pull out a gap on Patrese behind. A few spots of rain were beginning to fall, but Prost showed few signs of faltering despite the perceived advantage of the Brabham behind in the wet, putting in a series of fastest laps to extend his lead to 10 seconds. 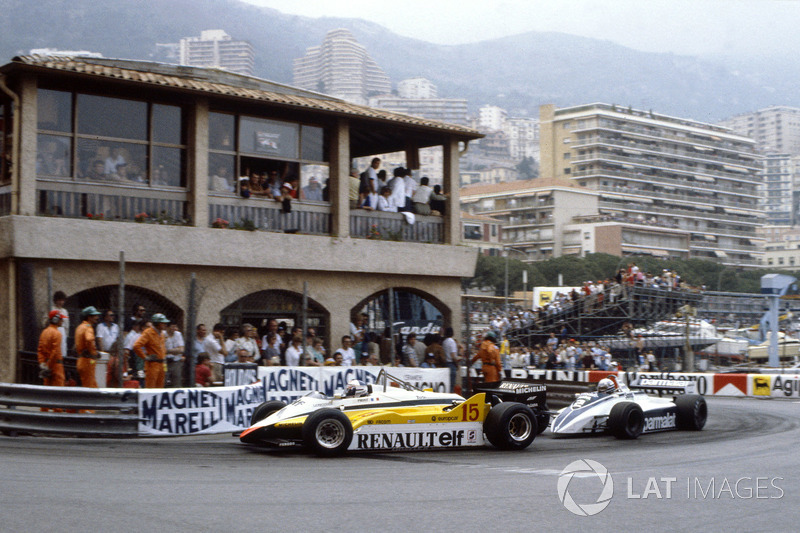 But then the rain started to grow heavier with 15 laps to go. None of the drivers wanted to pit for a change of tyres so close to home, but they faced trouble keeping out of the wall. Keke Rosberg hit the wall 11 laps from the finish while chasing Andrea de Cesaris for fourth. Michele Alboreto took up the mantle to try and pass the Alfa Romeo ahead, only to also retire when his rear suspension failed in the final seven laps.

It was creating opportunities for cars further down the order, including de Angelis, who was now in the points, despite continuing to "drive as if oblivious of other cars on the track", per Roebuck. He was chasing Derek Daly, who was driving without a rear wing or a rear-view mirror on his Williams after clouting the barrier. His damaged gearbox was leaking oil on the track, leaving the circuit like an ice rink in places for the other eight cars still running in the race.

Prost looked bound for victory entering the final three laps, now he had overcome the final major obstacle of de Angelis, lapping him again despite a brush of contact. But, as the Renault came through the chicane exiting the tunnel, the rear-end flung around and speared into the barrier on the right-hand side of the track. His car bounced back into the barrier on the opposite side, shedding the wings at each end and one of its wheels. Prost was left to hop out of his car, knowing a maiden Monaco win had just been thrown away.

Patrese had been able to pass the crash site safely, moving into the lead for Brabham, but the Italian would last just three-quarters of a lap heading the field. On the penultimate lap, Patrese's car snapped sideways on the slight kink towards the Loews hairpin after hitting the oil Daly's car had dropped, leaving his car facing back uphill.

Patrese allowed his car to roll backwards before being given some help by the marshals, who adjudged the car was in a dangerous place. "There were discussions about being disqualified, but the marshals had pushed me because I was blocking the road," Patrese said. "After that, they left me but fortunately the nose was pointing downhill and started to roll, so I could restart the engine." 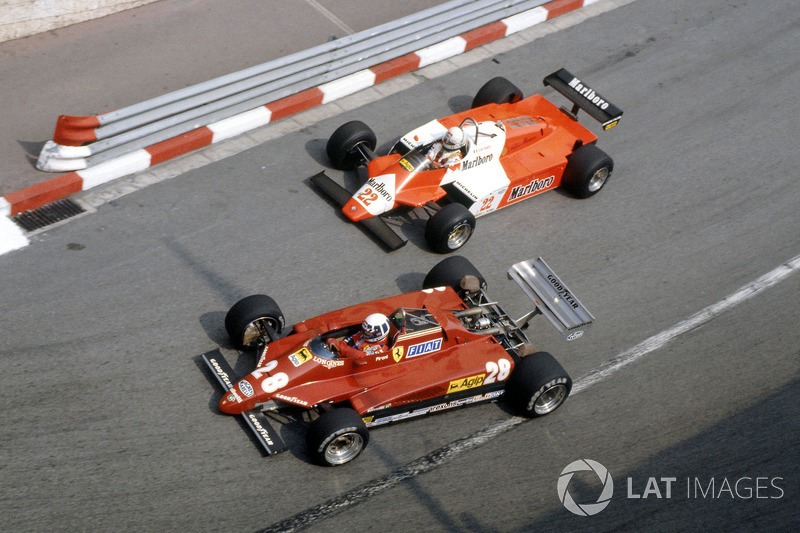 While Patrese was able to get his car back running, he failed to do so before both Pironi and de Cesaris were able to file past at the hairpin, demoting the Brabham to third place. Pironi was right to be running cautiously given the loss of downforce after the earlier run-in with de Angelis and the tricky track conditions, but he was almost at a crawl as cars around him passed to un-lap themselves.

As they began their final lap, the marshals kept waving to the leaders telling them to slow down - but Pironi had little say in that matter. "I thought maybe I had an electrical problem because of the wet," he said. "For three or four laps the car had been misfiring - but it was more simple than that..."

The answer? No fuel. The tank in Pironi's car finally ran dry as he ground to a halt in the tunnel. The marshals were quick to hop over the barrier and give him a push, but knowing he would be disqualified for a bump start, Pironi shook his head, undid his seatbelt and hoisted himself out of his car.

That should have handed the lead to de Cesaris, but he too had run out of fuel just a few hundred metres earlier at Casino Square. Less than one lap from home, the Italian had missed out on a maiden victory in only his second full season. He would bow out of F1 some 12 years later with the unwanted record of the most races started without a win.

"We've got this ridiculous situation where we're all sitting by the start-finish line waiting for a winner to come past, and we don't seem to be getting one!" exclaimed 1976 world champion James Hunt in the commentary box, as the wingless Daly crashed out one lap down in the final sector.

But, through the chaos, Patrese was able to round the final few corners and cross the line to score his first grand prix victory - even if he didn't realise it at the time. 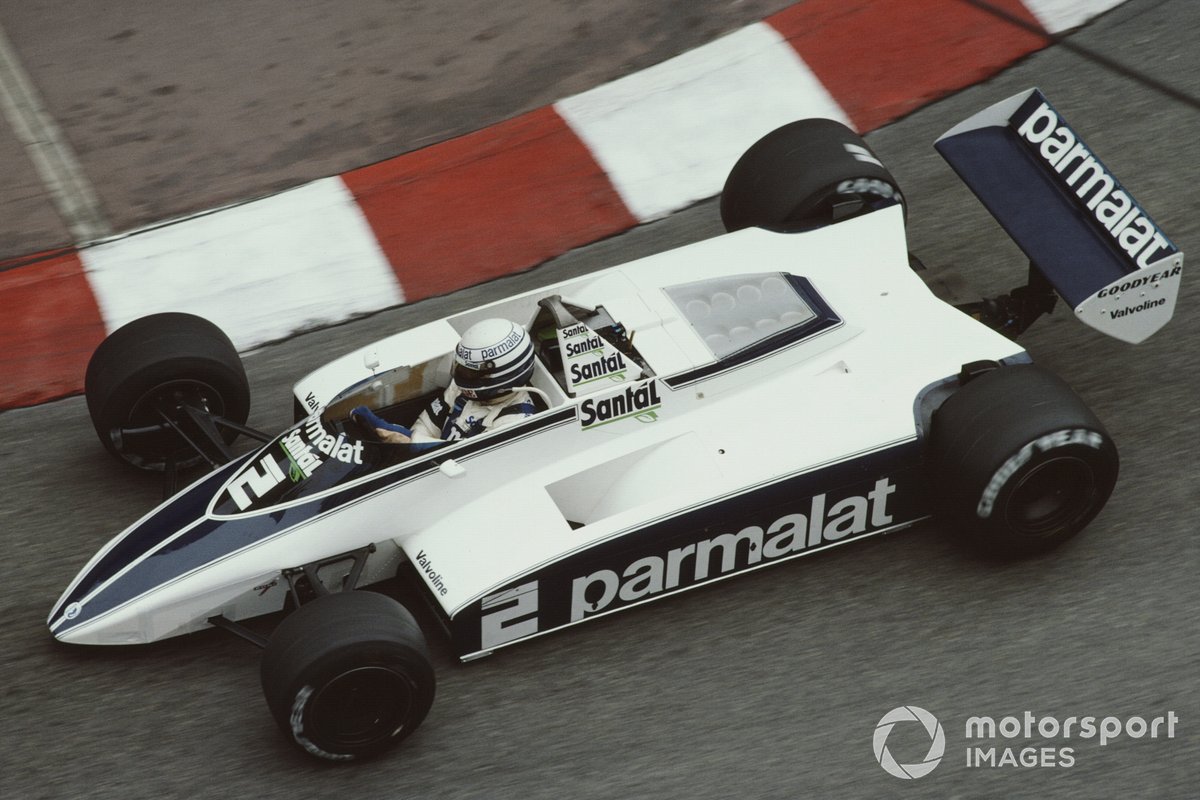 "I got back in the lead without knowing it!" Patrese revealed in a 2012 interview with Autosport for a special edition on the 1982 season. "When I crossed the line, I had no idea I won because we didn't have radios in those days.

"It was very sweet to realise in front of the podium that I had won my first grand prix."

Adding to the oddity of the podium for Patrese was the identity of the drivers joining him on the rostrum: Pironi and de Cesaris, neither of whom had actually taken the chequered flag. As both had already lapped the rest of the field, it meant they finished ahead of fourth-placed Nigel Mansell, who had fought back after a pitstop left him 10th with 20 laps to go.

Patrese had his first win, Ferrari had an emotional first podium since Villeneuve's death, and de Cesaris had a maiden F1 podium to go with the pole he'd scored at Long Beach six weeks earlier. Mansell and de Angelis took fourth and fifth for Lotus, while the stricken Daly rounded out the points in sixth for Williams.

The only other cars to see the chequered flag were Tyrrell's Brian Henton and Arrows' Marc Surer, who finished eighth and ninth, four and six laps down, respectively.

Modern classics such as Canada 2011 and Brazil 2019 may be remembered for their crazy finishes - but in truth, none of it quite lived up to the late drama of Monaco '82. 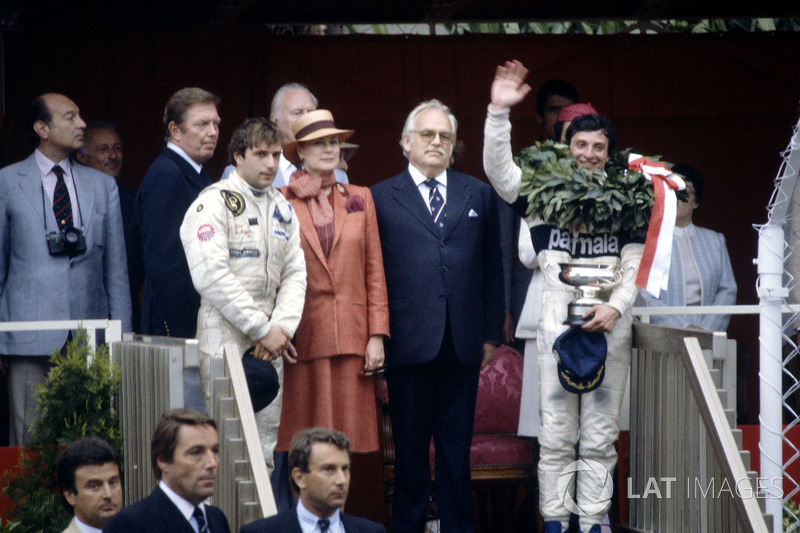 How Ricciardo banished his Monaco ghosts in 2018

Wolff “growing as a human being” during F1 break