Red Bull would take "major issue" with FIA over Budkowski 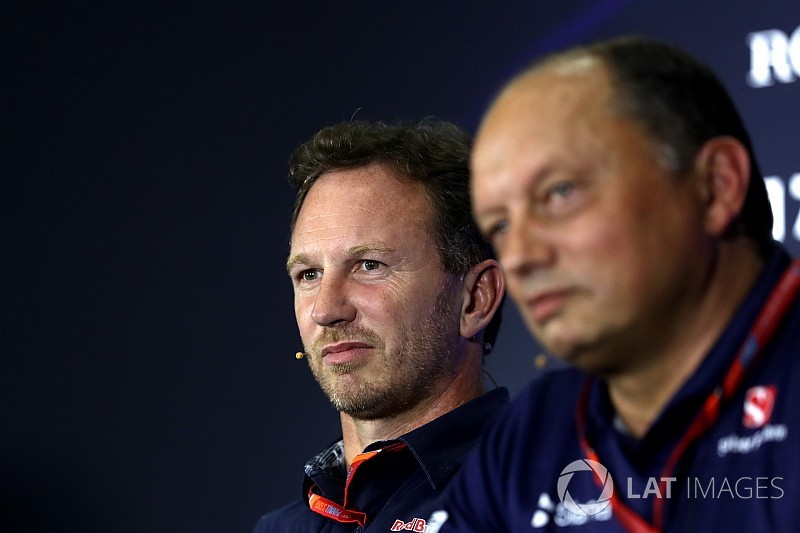 Red Bull says it will take "major issue" with the FIA if its former F1 technical department head Marcin Budkowski ends up working for Renault.

Leading teams have already discussed the potential impact of Budkowski joining a rival squad, amid growing suggestions that he resigned from the FIA because he wants to take up a job offer at Renault.

While Renault has so far declined to comment, the situation has caused unease in the paddock and Red Bull boss Christian Horner made clear on Friday how unhappy he was with it.

"We will take major issue with that if he does end up in another team," explained Horner. "In these individuals, you place an enormous of trust in the role that Marcin has been responsible for.

"He has been in an extremely privileged position where he has extremely recently been in people's wind tunnels and been looking at intimate details of knowledge of next year's cars.

"I think three months notice period and for him to then turn up in a competitor team in F1, is entirely inappropriate.

"I hope that isn't the case and I am sure it will get discussed quite seriously at the next Strategy Group meeting."

Sauber boss Fred Vasseur added: "We need to know where Marcin will go, but it is a big issue.

"The FIA is fully aware of all the details of the team's project, and if we cannot be open with the FIA it is a tricky situation. It is important to know where Marcin will go."

With the Strategy Group poised to discuss the matter at its next meeting, Horner said it was essential teams could trust the governing body with information it was given.

"It is an important part of the role and it is vital that the teams have trust and faith in the governing body that they can share and discuss their technical know-how and technical secrets in many respects," he said.

"These cost millions and millions of pounds, and it should be in confidence that that information does not have the ability to end up in a rival team."

Mercedes boss Toto Wolff added: "I personally get on with Marcin and wish him success for his career, but we need to look at the [gardening leaves] times.

"We need to be transparent with the FIA and give them access, and therefore in order to have the full trust of the teams it is important to have a certain stability and understanding how quick somebody can leave the FIA and join another competitor team."

Force India COO Otmar Szafnauer said it would have been much better if FIA personnel were barred from joining teams for a 12-month period if they left the governing body.

"I think a year, it has to be long enough such that the technology he is aware of is not obsolete but not leading edge. There are some sporting regulations that prohibit us from selling current year cars for exactly the same reason."