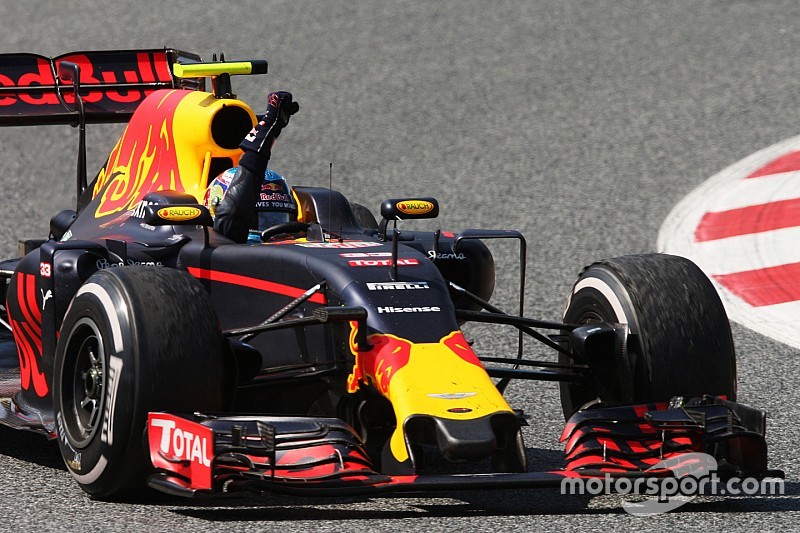 Max Verstappen will only get stronger as a driver on the back of his maiden Formula 1 victory, says his boss Christian Horner.

Verstappen got his Red Bull career off to a perfect start on Sunday, as he delivered a flawless performance at Barcelona to take his team's first win since 2014.

And although Horner fully understands that the young Dutchman will not be able to deliver such results all the time, he does expect him to thrive as a driver.

"To come in and qualify on the second row and then win in your first grand prix [with a new team], it can only get worse," said Horner.

"But I suspect he will only get stronger and, as he gets more experience, and more familiar with the car, his confidence will grow.

"I said it before the weekend, but I really believe we have got the strongest pairing of drivers in Formula 1 now. I think Spain demonstrates that.

"To see the two Red Bull cars running at the front, I think it demonstrates that we really have got an awesome driver pairing and we are in a position which is far stronger than we could have imagined.

"We felt that the second half of the season would be stronger than the first. But we were on the podium in China, we've won a grand prix here in Barcelona after five races. I would never have even dreamed of that pre-season."

Horner believes one of the biggest attributes Verstappen displayed was in staying calm and under control despite intense pressure from Kimi Raikkonen.

"I think the biggest aspect of his performance has been his calmness," explained Horner. "He's obviously got a lot of capacity when he's driving the car.

"Even when we are all getting tense with five laps to go because the tyres were at the end of their life, and he's got Kimi breathing down his neck with the obvious advantages where they have it, he just very calmly on the radio and said, 'please could you ask Charlie [Whiting] to deal with the blue flags swiftly.

"There was no agitation in his voice, there was no panic, there was no tension and it was a young man who was completely in control of what he was doing. That's what he has done from the moment he stepped in the car.

"He did a 1m27.5s lap time on his first flying lap in the car and really since then he's not put a wheel wrong, all weekend.

"It's been a remarkable performance and I think it's great for Red Bull, it's fantastic that Dietrich Mateschitz was here to see a big result for the team after a first win since Spa in 2014.

"I think it's also great for Formula 1 to have a new young winner as well and a really exciting grand prix today."