May 6 (GMM) With the European phase of the 2013 season now looming, Rubens Barrichello thinks Red Bull is a step ahead.

Indeed, drivers' title leader Sebastian Vettel is the only multiple race winner of the season so far, while Red Bull is also off to an early lead in the constructors' standings.

"Ferrari is very consistent," Brazilian veteran Barrichello told Totalrace, "and the car is a lot like the Red Bull in terms of pace and consistency. 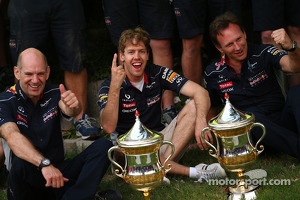 "But the Red Bull is really the team to beat; they have a little bit more of everything," said the 40-year-old, a new commentator for Brazilian television Globo.

"The Mercedes is a car that gets the tyres working for a great lap on Saturday," Barrichello continued, "but in the race they can't maintain the same pace.

"The Lotus is a very well balanced car that does not have the speed in qualifying, but saves the tyres very well in the races.

"A fifth team that (like Lotus) also looks after the tyres and is quietly achieving is Force India. Their race pace is very good," Barrichello added.

"Ferrari is strong," he is quoted by the Mirror newspaper, "Lotus has a good car, and the Mercedes - certainly over a single lap - is very strong."