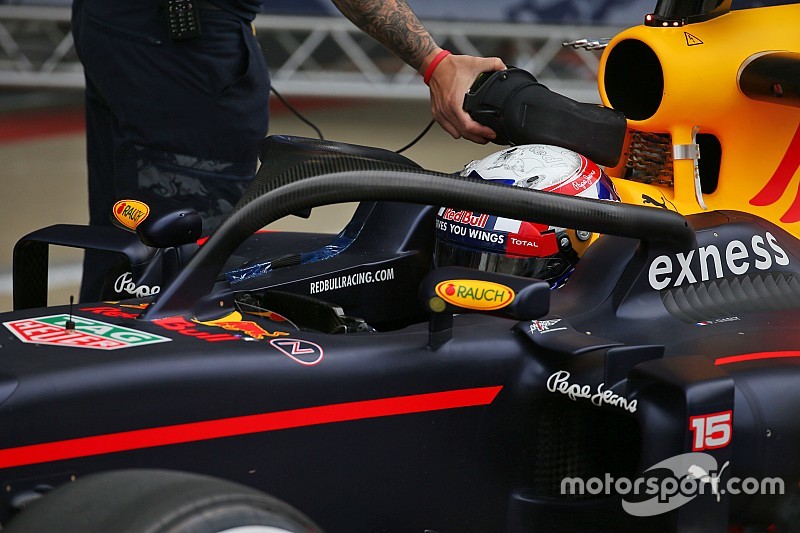 The FIA is set to face a choice of forcing through the introduction of the Halo into Formula 1 in 2017 on safety grounds or delaying it for another year, after Red Bull made clear it is not ready to support its introduction.

Motor racing's governing body is happy that the Halo is now 'technically ready' to be fitted to cars in 2017, following recent track testing of the latest version of the system.

The overall design has been tweaked – to make it less bulky and ensure that there was no risk of a driver's head hitting the structure in the event of a crash – and a plan is in place to make the structure of lighter titanium.

The new 'Halo 2' also successfully went through extraction tests at the Austrian and British Grands Prix – with Silverstone also having it fitted to a dummy chassis to help medical crews better understand how to work with it.

But despite the safety green light from the FIA, the issues remains a political hotbed – with teams not completely won over by the implications of its introduction in 2017.

Red Bull is open that it feels the Halo is not yet good enough to be voted in for next year, and will stand against it if teams are given the choice.

This comes despite it running a version of it on one of its cars at the Silverstone test on Tuesday.

Ferrari's Sebastian Vettel expressed some reservations about visibility following the installation lap he completed with it at Silverstone on Friday.

"You lose quite a bit [of visibility] on top of you,” he said. “You're not looking in the sky all the time when you go around, but I think it needs some further running. I know the decision is up fairly soon. I don't know what the results are on the actual research...

"I think you will always have certain scenarios that you can't cover, but you try to cover as many as possible, so that has to be the target."

It had previously been thought likely that the final approval to modify the regulations for introducing the Halo would go through the normal legislative channels – which are the Strategy Group and F1 Commission.

Due to the timeframe of it coming into force for 2017, such changes to the rules would require unanimous support - so one team standing along and rejecting it would be enough to stop it.

It is understood the next Strategy Group meeting is due to take place ahead of the German Grand Prix.

Amid fresh concerns about potential downsides to the Halo – and whether or not it would be better to wait – Red Bull boss Christian Horner has stated that he would vote against it at the moment.

“Personally I am not a big fan of the Halo,” he said when asked by Motorsport.com. “I think it is an inelegant solution to the problem it is trying to deal with.

“I would prefer there to be more research time taken to do the job properly rather than rushing something through that may have other consequences. I am not a big fan of the Halo and the limitations that it has.”

He added: “I certainly wouldn't vote in favour at the moment.”

Red Bull's stance would be enough to block the Halo from introduction in 2017 unless the FIA wished to stand firm and force it through on safety grounds.

Article 2.2 of F1's 2017 Technical Regulations makes it clear that changes to the rules for next year can only be made with unanimous support of teams or on safety grounds.

It states: “These Technical Regulations may only be changed after 30 April 2016 with the unanimous agreement of all competitors entered in the 2017 Championship, save for changes made by the FIA for safety reasons which may come into effect without notice or delay.”

It means the FIA would face a choice of triggering the 'safety' clause or deciding to wait until 2018 when it would only need majority support.