Red Bull Racing, whose veteran driver, Mark Webber, remains in a Hobart, Australia, hospital after a weekend bicycle-car collision, announced Tuesday the reacquisition of a 50-per cent stake in junior team Scuderia Toro Rosso. The move by the ...

Red Bull Racing, whose veteran driver, Mark Webber, remains in a Hobart, Australia, hospital after a weekend bicycle-car collision, announced Tuesday the reacquisition of a 50-per cent stake in junior team Scuderia Toro Rosso. The move by the Formula One team is subject to approval by competition authorities and reverses an effort in the past year for Red Bull drinks billionaire Dieter Mateschitz to sell his half-interest in STR 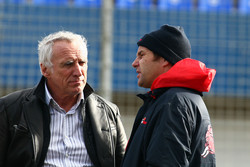 Past F1 racer Gerhard Berger held a half-stake in Toro Rosso for two years and he brought the former Minardi team to its first Grand Prix victory in 23 years of F1 existence at the 2008 Italian Grand Prix. The driver who scooped that victory from pole position, Sebastian Vettel, 21, became the youngest driver to win a Grand Prix. Vettel then shifted to the Red Bull team for the 2009 season, testing for which began last week in Barcelona, Spain.

"I'm very grateful to Gerhard for his enormous input," Mateschitz said of his fellow Austrian in a team release announcing the transaction. "Together we have made Toro Rosso a team which, from 2008 onwards, will regularly qualify for the top 10 and collect championship points."

Mateschitz had put his shares in Toro Rosso up for sale this year in anticipation of changes to Formula One rules that by 2010 require all teams to design and build their cars. Recent discussion of relaxing those rules as the sport looks for ways to cut costs might have played into Mateschitz's position change.

"A 100 percent financing of a joint project by one partner can only make sense, to my mind, at an initial stage," Berger said. "This stage is over now. That's why Red Bull will take over the shares again."

Toro Rosso is without confirmed drivers for 2009. Vettel's move to Red Bull left four-time Champ Car champion Sebastien Bourdais striving to keep his seat after one season of struggle in F1. Remarks after last week's testings put Red Bull and Toro Rosso test driver and GP2 racer Sebastien Buemi in the frame for one of the two seats. Buemi, 20, indicated he is happy to play junior partner in a driver arrangement pairing an experienced driver with a neophyte. Veteran Takuma Sato, who with Buemi topped time charts for STR in testing last week, has been eyed as veteran in the configuration. Remarks attributed to Bourdais indicate the team would look kindly on a driver who could arrive with funds.

Scuderia Toro Rosso began in 2005 with the purchase by Mateschitz from Australian Paul Stoddart, who in late 2000 had bought the team founded by Giancarlo Minardi. Remaining based in Faeza, Italy, the renamed Toro Rosso (Italian for Red Bull) functioned as a development team for Red Bull Racing. Red Bull began life in 2004 with Mateschitz's purchase from Ford of Milton-Keynes, England-based Jaguar Racing. Webber raced for Jaguar before its Red Bull acquisition and renaming.