The battle on track between F1's top two teams this year has been accompanied by a fight off it amid recent questions being posed by Red Bull about the Mercedes rear wing.

Red Bull suspects that Mercedes has been running a flexible rear wing to boost its top speed, and has based its suspicion on photos that it believes shows score marks on the inside of endplates.

Mercedes insists that it is doing nothing wrong and team boss Toto Wolff said the photos that have been circulating do not show score marks, and claims Red Bull is seeing a "ghost".

At last weekend's Qatar Grand Prix, the FIA began a fact-finding mission to check on the flexibility of the rear wing main planes to see if any tougher tests need to be brought in.

Even though there has been no change to the rules and the Mercedes wings have fully passed all the current tests and FIA inspections, Red Bull believes that something has changed in terms of its rival's top speed.

Team boss Christian Horner says that the fact Mercedes and Red Bull were so equal on the long straight in Qatar suggested that the balance of performance between them has shifted for the first time since before the summer break.

"I think what we have seen in recent races is an abnormal straightline speed," said Horner.

"I think Toto [Wolff] has been at pains to point out that there have been gains in straightline speed when nothing has changed, but it's encouraging that this is the first race since prior to Silverstone we've been able to match their straightline speed and an exponential increase in races."

Although the FIA tests conducted in Qatar and over the remainder of the season will not hold any regulatory value, Horner believes that simple monitoring of the situation is a positive.

"I think that I am glad to see it is being well policed," he said. "I'm confident that the tests that have been introduced should eradicate any ability to circumnavigate."

But while Red Bull believe something has changed between the teams in their relative straightline speed, Mercedes is not convinced.

A look at the speed trap figures of the last five races, taking the quickest of the Mercedes and Red Bull cars at the official speed trap, shows the straightline advantage at each venue.

While there appears to have been a marginal difference, Mercedes thinks that the high-downforce demands on Qatar played a part in terms of shifting the top speed of both cars.

Asked what he thought of Red Bull's claims, Wolff said: "Have they shown some data or photographs about the straightline performance?

"It's a track here that is less power-sensitive, and interestingly I think they've just done a good job: their straight-line speed with the big wing (high downforce) is identical to ours. So yeah, I'm happy that they are happy.

"Let's go to Saudi Arabia and maybe we'll hear some comments again. In a way, the debates that are being kicked off or launched, I cannot follow any more.

"I have taken the decision for myself and the team that we're struggling to keep up with commenting on the rumours that are being made from that side." 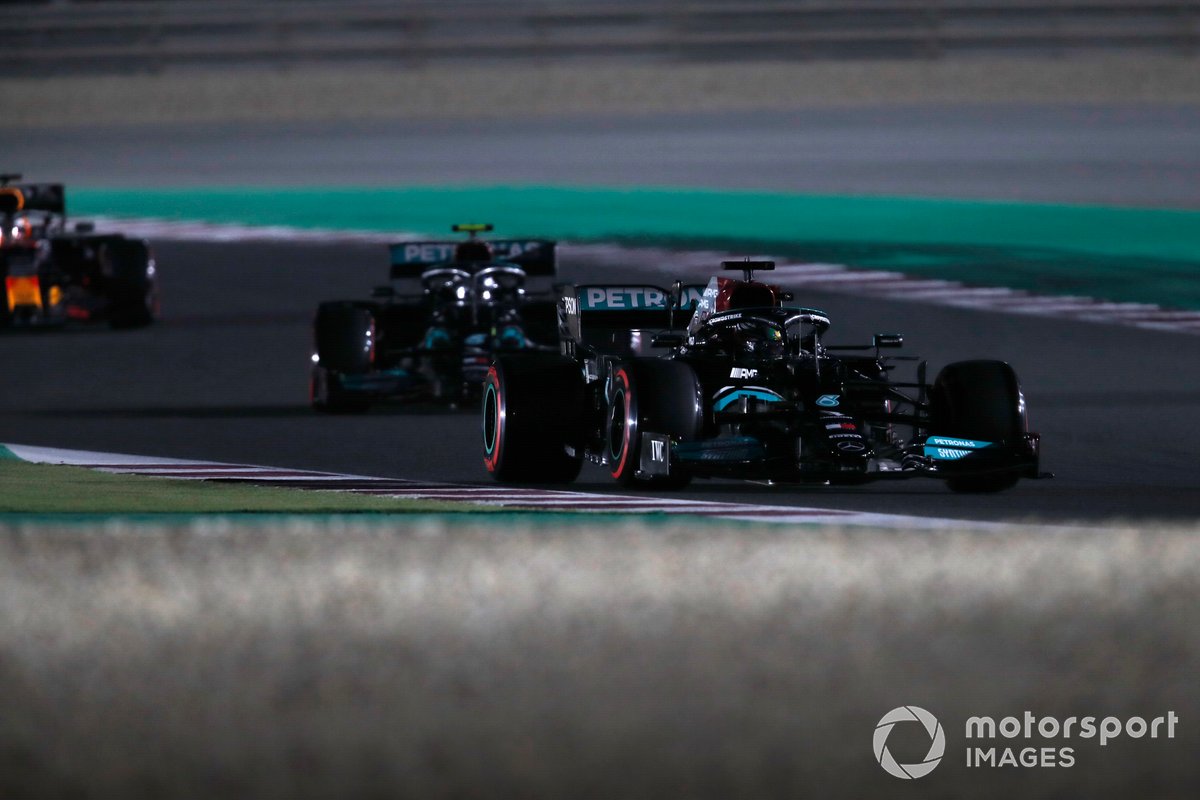 While the next race in Saudi Arabia is expected to favour Mercedes, the season finale in Abu Dhabi looks to be more evenly balanced.

Horner thinks that the fight between his squad and Mercedes is too close to call right now.

"I think it's going to be tight," he said. "The next track arguably should favour Mercedes but Abu Dhabi, with the modifications made there, who knows?

"Going into these last races, we have an eight points lead in the drivers' championship, and we've reduced the gap in the constructors to five points. So both are fully in play. And that's fantastic because we're now at the climax of this world championship."