Red Bull feared backmarker Mick Schumacher would cost Max Verstappen victory in Formula 1's United States Grand Prix after he failed to get out of the way late on.

Verstappen was under intense pressure from a chasing Lewis Hamilton in the final stages of the Austin race when they closed in to lap Schumacher's Haas car.

But rather than jump out of the way immediately, Schumacher kept to his line for a number of corners before pulling over on the run to the final corner.

Red Bull team boss Christian Horner said those moments left him worried that Verstappen would lose ground to Hamilton and allow his Mercedes rival to get within DRS range for an overtake.

In the end, however, Schumacher's delay in getting out the way meant that Verstappen was able to pick up a DRS activation, which he used to slightly escape from Hamilton on the start-finish straight on the final lap.

Reflecting on that moment of the race, Horner said: "It's very difficult to factor into your strategy the backmarkers.

"We lost a lot of time behind Yuki [Tsunoda] and then Mick Schumacher was quite costly on the last couple of laps. I thought that was going to cost us the victory, because he held up Max through the whole last sector.

"But thankfully we did pick up the DRS on the start finish straight, which at least gave Max a little bit of breathing room into to Turn 1. But it certainly added to the stress on the pit wall." 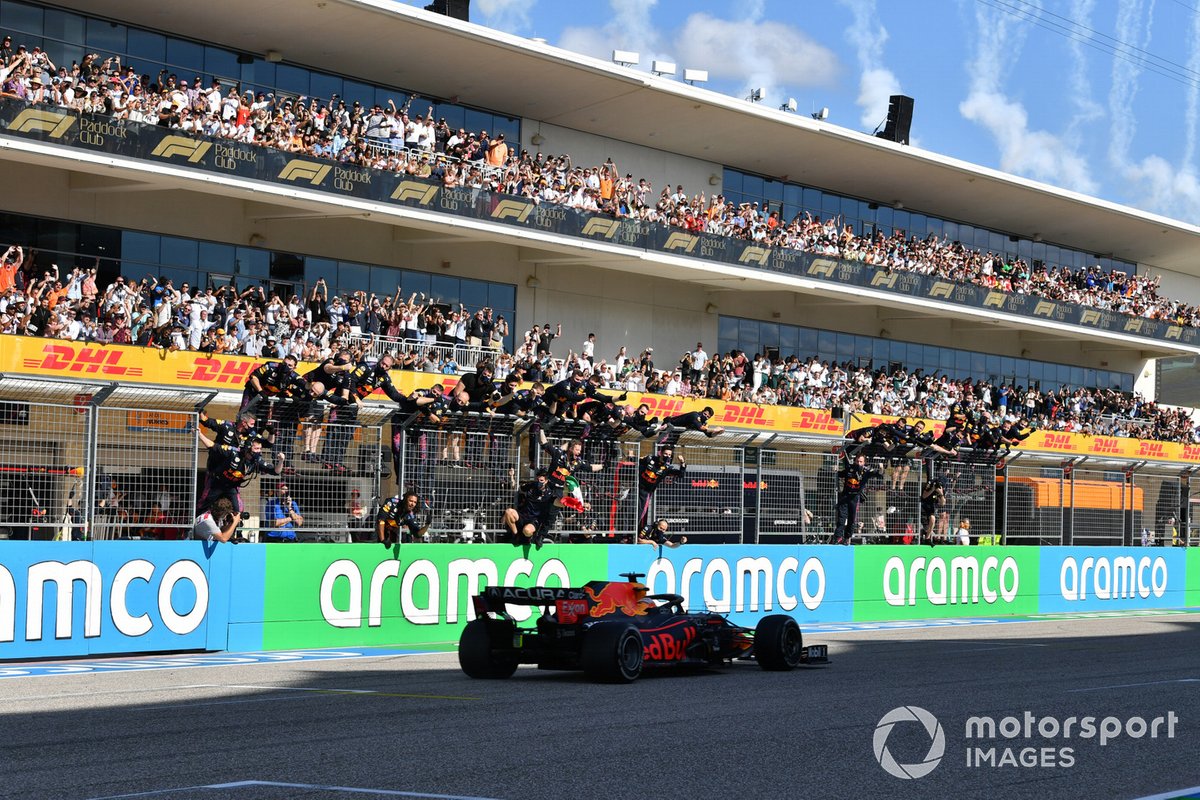 Max Verstappen, Red Bull Racing RB16B, 1st position, takes victory to the delight of his team on the pit wall

The worrying moment with Schumacher came after Red Bull went for an aggressive strategy in gunning early for fresh tyres, when Verstappen got boxed in behind Hamilton in the opening stages of the race.

Horner said that Red Bull's decision to go for the early undercut was prompted because of concerns that Verstappen was killing his rear tyres being stuck in Hamilton's wake.

"I think we were quicker on the medium and Max could see that Lewis was sliding around a lot," explained Horner.

"We were in danger of overheating our own tyres and were being a bit stuck, so we decided to take the gamble and find some free air. That was then going to put us under pressure at the end of the race.

"It was inevitable Mercedes were going to run long, but we were able to push them to change early on the first stint by getting Checo [Sergio Perez] in as well.

"But of course they then had the ability to go long in that middle stint, which gave them an eight lap tyre advantage to the end of the race.

"But Max did a fantastic job in managing the degradation and having enough rear tyres left for those crucial final five laps when Lewis was looming large. What a phenomenal performance by him."

Asked if he would rate Verstappen's calculated performance in Austin as his best ever driver, Horner said: "I think it's up there.

"I think he managed the race incredibly well. Obviously we didn't have a great start, but we were able to get the win back.

"It was an aggressive strategy, we went for it and we were able to make it work. So I think a big win for us at a circuit that obviously Lewis and Mercedes have been so dominant at in the hybrid era."