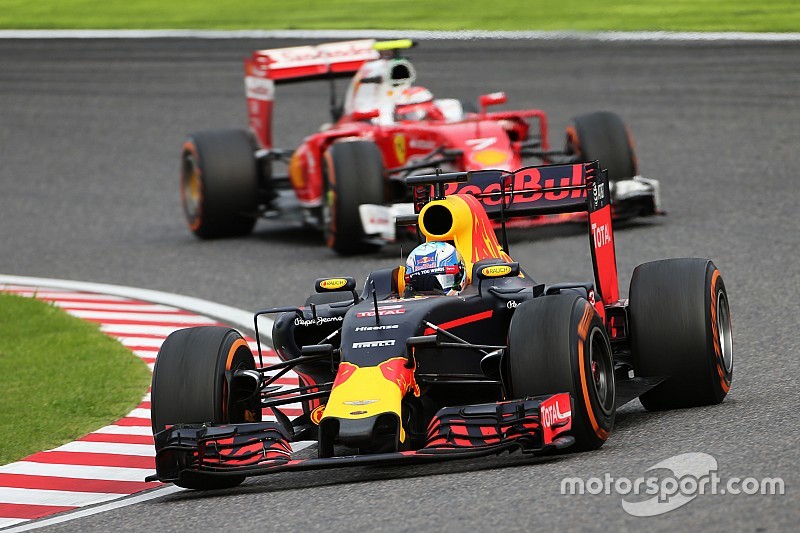 Red Bull thinks Daniel Ricciardo’s form at the Japanese Grand Prix was hurt by a slightly down on power engine, and his car rubbing too much on the ground.

Telemetry comparisons between the Australian and teammate Max Verstappen showed he was losing time on the straights, estimated to be around 0.07 seconds on the run to 130R and nearly the same again on the start/finish straight.

The difference – which was worth more than 0.1 seconds over the lap – was key with the two Red Bull cars separated by just 0.062 seconds in qualifying.

As a consequence of their grid slots, Ricciardo was hampered by starting on the damp side of the track, which meant he lost ground on the run to the first corner that he was then unable to recover from.

Analysis showed two factors to blame for Ricciardo’s top speed deficit: power variation because of an issue with the fuel flow meter and an end-of-life engine, plus Ricciardo’s floor rubbing too much on the track.

Red Bull team boss Christian Horner was confident, however, that the issues would be resolved when Ricciardo and Verstappen moved on to fresh powerunits for the next race in Austin.

“Daniel has looked a little bit down on straight line speed, and the engine guys are having a look at that,” explained Horner. “The engines are towards the end of their life now.

“Plus his car was perhaps touching a little bit [on the floor] down the straight too, but I am sure there will be a lot of investigation from the engine guys into that.

“But both drivers will get their fifth and final engine for the next race.”

Horner believes that maximising Red Bull’s chances in the final races are important because it is locked in a tight fight with Ferrari for second place in the constructors’ championship.

“It is where the financial revenues are distributed,” he said. “On top of pride, there are financial implications as well.

"Second is enormously important for next year’s budget situation.

“But I think [the battle] will be swings and roundabouts. Hopefully the next two tracks shouldn’t be too bad. Brazil should suit Ferrari, and Abu Dhabi is probably neutral.”

Rosberg "hasn't seen any self destruction" in Hamilton