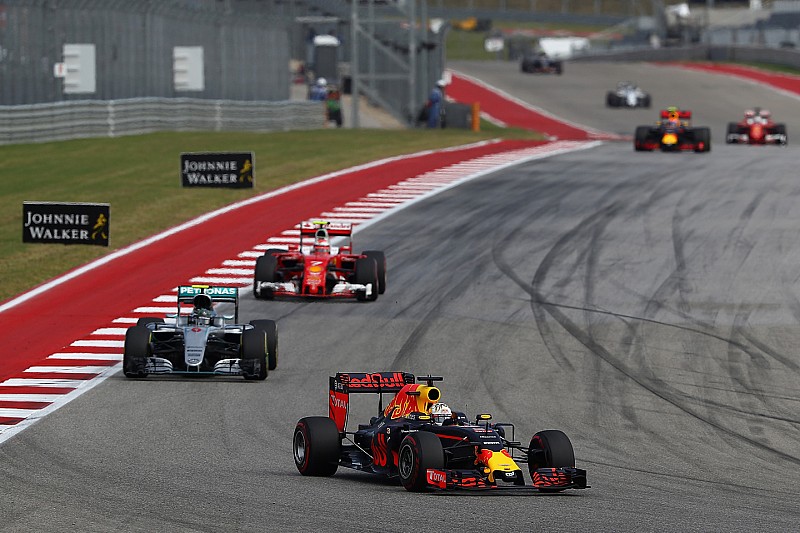 Red Bull thinks that the boost that Mercedes gets from its qualifying engine modes is now the main thing separating the two teams.

All the Mercedes outfits are aided in qualifying by being able to run their power units in a boost mode that delivers extra horsepower. It is believed that the performance step is worth around three tenths of a second per lap.

On the back of a United States Grand Prix where Red Bull was not so far behind Mercedes on race pace – but lagged by three tenths in qualifying – the value of the engine modes are now clear.

Red Bull boss Christian Horner admitted that the Saturday situation was hard to accept, but felt encouraged that his team was now in a position to shadow Mercedes in races.

"We know the two to three tenths that they have in qualifying is quite painful for us," he explained. "But on race day we are nudging closer and closer."

He added: "I think we have definitely closed the gap. If you look at the race here, there is not huge divergence and one has to assume that Mercedes were not cruising after the last pit stop, because they are racing for a world championship.

"It is encouraging that we are able to be running around with them, rather than watching them going into the distance. It has been a massive step forward for us this year."

Despite being close to Mercedes, Horner says his outfit is under no illusions that his team is yet in a position to beat the German car manufacturer on pure pace.

"Mercedes – why wouldn't they, having won all the races that they have this year, why aren't they going to have that pace in the final three?" he said. "We just need to make sure that we are the team in a position to capitalise in the event that they trip up."

And when asked if the tense title battle between Hamilton and Rosberg could present good opportunities for his outfit, Horner said: "Now we are at the business end of the championship, you can only imagine that it is going to intensify between the two of those guys.

"So we just want to be in a position to capitalise on any moments that they might have."

Red Bull's engine supplier Renault is flat out with development of an upgraded engine for 2017, which may well deliver the qualifying engine mode boost that Horner is after.

But while many suspect Red Bull has a decent title shout in 2017, Horner says nothing is guaranteed – despite his outfit's aerodynamic brilliances.

"I've no idea," he said. "It is a clean sheet of paper for everybody, but it is an area we have been strong at previously – and you never know if someone has got a silver bullet up their sleeve with a big regulation change like we have got."

Force India “played get out of jail card” in Austin, says Fernley