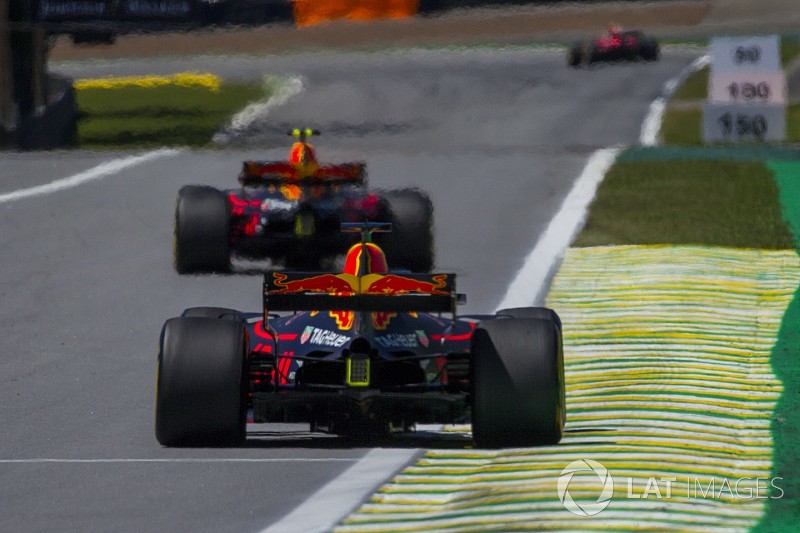 Red Bull says that a combination of track characteristics and being forced to run conservative engine modes were to blame for its failure to challenge Mercedes and Ferrari in the Brazilian Grand Prix.

Although the Milton Keynes-based team had won two of the four grands prix before Brazil, and been on the pace in practice and qualifying at Interlagos, it could do nothing to mix it at the front in the race.

But after a run of reliability problems for Renault, Red Bull boss Christian Horner said that his outfit's efforts were not helped by it needing to wind down its power unit to ensure it did not hit problems.

When asked by Motorsport.com to explain why Red Bull's pace in the Brazilian GP was not great, Horner said: "I think, circuit layout, and we've run pretty conservative engine-wise - to be honest with you.

"The way that the race panned out, Max [Verstappen] was having to take so much out of the tyre to go with the leading group, and you could see, if he got within two seconds, it started to damage the tyres.

"Early on, he thought he was quicker than Kimi, but then the tyre started to get into a few issues and then you start to be restricted in your stint length. So it was one of those days where we just didn't quite have enough pace to mount a challenge to the cars ahead."

Although annoyed that the lack of engine performance hampered its bid for another podium finish, Horner admitted that after recent reliability problems, and a shortage of parts, it would have made little sense to try to push things to the limit.

"I think after all the problems that there's been, it was perhaps the more prudent approach to the race," he explained. "And this layout - you know, it's different, it's very power sensitive here, more so than Mexico.

"With the operating parameters, we ran a little lower. But of course it's a different challenge here, there's a lot more full throttle here than there is in Mexico."

Analysis: How Hamilton went from last to fourth in Brazil