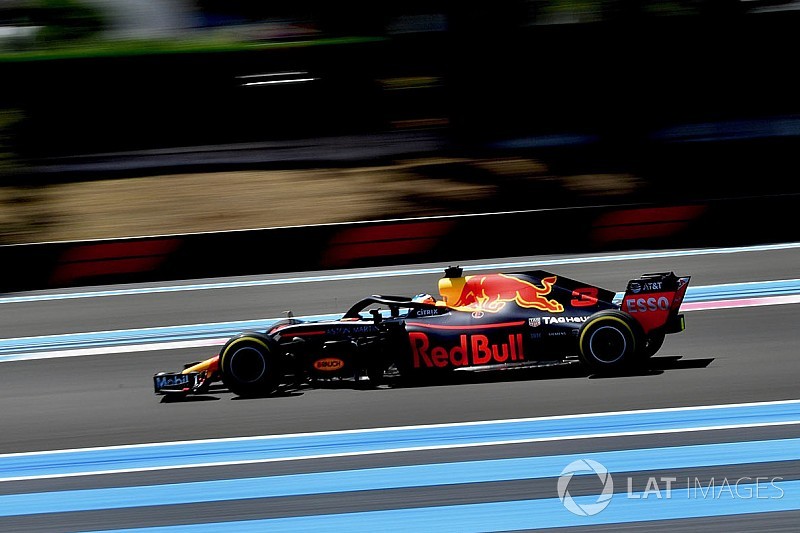 Red Bull claims it was still losing seven tenths of a second on Paul Ricard's straights despite gambling on running Spa levels of downforce in qualifying for the French Grand Prix.

With the team well aware that its Renault power unit is lacking compared to Mercedes and Ferrari, it elected to trim out Max Verstappen's wing in a bid to not lose out in a straight line.

But although Verstappen managed to qualify on the second row – just three tenths adrift of Sebastian Vettel – Horner said that the team was still losing out in top speed term.

"I think Max is slightly lower in downforce from just before qualifying," Horner told Sky.

"We are pretty much at Spa levels of downforce and unfortunately we are still seven tenths down on the straight!

"But both drivers have done a great job there. Fourth and fifth we can still race well from there."

Red Bull elected to run the supersoft tyre in Q2, a move which it believes will offer it a good chance of taking the fight to the ultrasoft-starting Ferraris.

"I think Mercedes have gone at this race," explained Horner.

"I think this tyre is really suiting their car on this surface, so I think as long as they don't screw it up tomorrow they are in pretty decent shape. But I think we have really got a race with Ferrari.

"They have gone a different route and are starting on a different tyre, and it is higher deg on that tyre. So, hopefully that gives us more variables and more opportunities in the race.

"So we have got two good race drivers and it is going to be very difficult to pass here, so it needs to be done on strategy."

Asked if he was surprised about Ferrari's choice, Horner said: "Yes. It is going to be interesting. You are a long time on that left front tyre here so it gets quite a hammering.

"And if the sun comes back tomorrow and the temperature goes up, it could be interesting to see which strategy works out best."