Indeed there were many questions to why the Infiniti Red Bull team was not consistent during the Formula One four rounds of the preseason testing in Jerez and Barcelona versus Mercedes setting fast times.

Mar.4 (GMM) As the sun set on the final day of pre-season testing late on Sunday, the words on everyone's lips were Mercedes and Red Bull.

Red Bull's Dr Helmut Marko added: "(It is fast) at least on one lap. But at least we do have to take them really seriously."

I am convinced some of our opponents have been bluffing.

McLaren sporting director Sam Michael agrees: "Hamilton and Rosberg have been quick in all circumstances."

On the other hand, there are now questions being asked about the pace of world champions Red Bull's new RB9, after a difficult last weekend of testing in Barcelona.

New haircut aside, Sebastian Vettel did not look entirely cool.

"It has been extremely difficult to assess some changes and find the right direction with the car, simply because the tyres have not been good enough," he is quoted by Brazil's O Estado de S.Paulo newspaper.

Teammate Mark Webber added: "We need another couple of weeks of testing, but we don't have it."

German Vettel continued: "The new parts are not working exactly the way we had hoped."

Some paddock insiders suspect Red Bull, now less than a fortnight before Melbourne, is bluffing.

"They have hidden their game the whole time," thinks Ferrari's Felipe Massa. 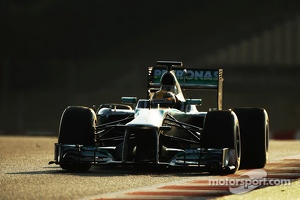 Nico Rosberg added: "I am convinced some of our opponents have been bluffing."

But even Red Bull team owner Dietrich Mateschitz sounds concerned: "I think the tyres are making everyone a bit worried," said the billionaire.

Right-hand man Marko added: "Not everything has gone to plan, but now is the time to analyse the data."

Speed Week's technical expert Gary Anderson said: "I still think the best car is the Red Bull, but the Mercedes has left a great impression, and I also see Lotus at the front, even though they have had problems with reliability.

What about Ferrari? As his test duties ended, Fernando Alonso said the F138 is "200 times" better than last year's red car.

Team test driver Marc Gene told Marca newspaper: "There are several teams that can win races. I know Fernando is happy with the car. 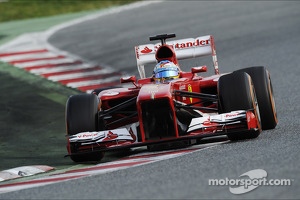 "I did a filming day and it has more grip. We are where we imagined, but we do not know about the others."

After recovering from apparent food poisoning, Kimi Raikkonen closed his winter by saying he doesn't expect the 2013 pecking-order to be much different to last year's.

Asked if he could have matched Rosberg's winter-best Barcelona time, he smiled to the Finnish broadcaster MTV3: "It would have been close."

Agreed McLaren's sporting director Sam Michael: "From the laptimes we've seen, the season is going to be incredibly close."