On this day in April 1979, Ferrari star Gilles Villeneuve caused confusion at the start of the US Grand Prix West by missing his grid spot. We look at eight chaotic F1 starts throughout the years. 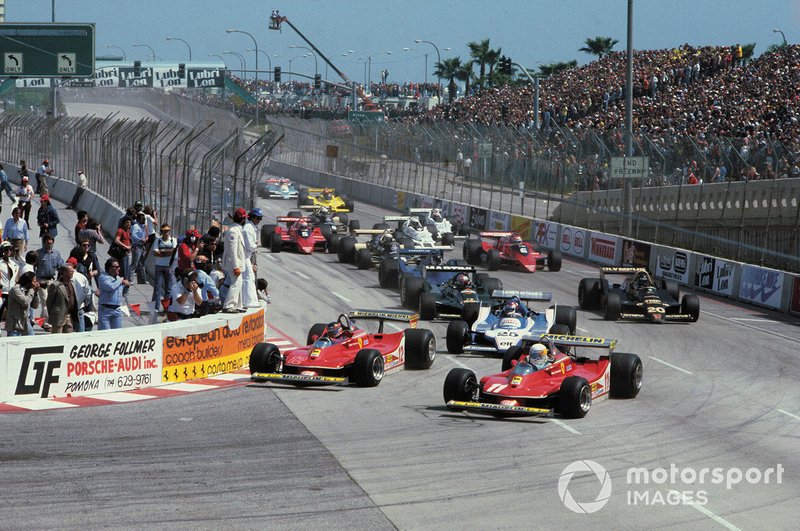 On April 8 1979, 24 Formula 1 cars were set to line up on the grid in Long Beach for the US Grand Prix West. At least, that was the plan. Polesitter Gilles Villeneuve simply forgot to stop at his designated grid spot and drove past, seemingly occupied with getting heat into his Ferrari’s tyres. The Canadian caused plenty of confusion behind him. Fourth-placed Patrick Depailler pulled up alongside the Ferrari, gesticulating to Villeneuve.

In the confusion Depailler’s Ligier team-mate Jacques Lafitte ground to a halt when the rear of his car seized. The drivers ultimately decided the head back to the pits and await a restart. That allowed second-placed Reutemann, who didn’t make the original grid, and Lafitte to start the race from the pitlane. After heated conversations Villeneuve was allowed to keep his pole. The Canadian took victory just under two hours later after a gruelling race in which only nine cars saw the chequered flag. 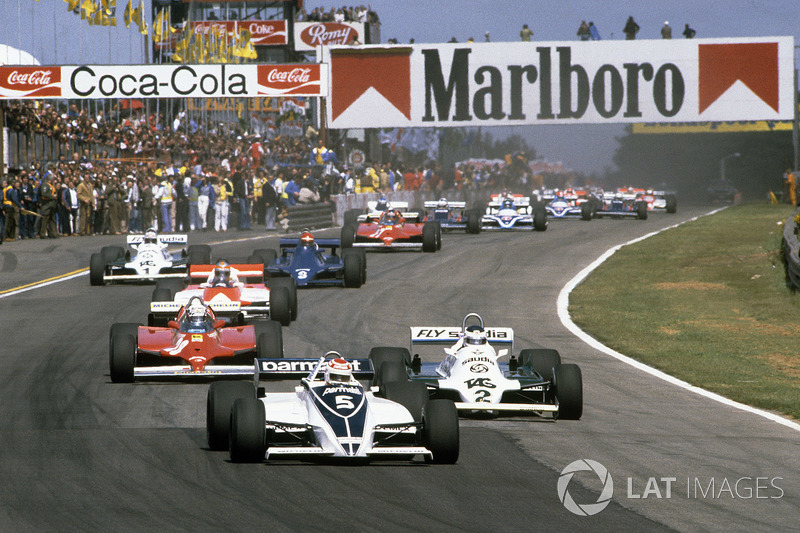 The 1981 Belgian Grand Prix in Zolder was struck by tragedy on Friday. A mechanic was critically injured during practice after stumbling and being hit by Carlos Reutemann in the pitlane. He would succumb to his injuries the Monday after the race. The incident triggered protests from mechanics from all teams about the lack of safety in the pitlane. In those days, well before the arrival of pitlane speed limits, pitlanes were overcrowded with hangers-on and generally much narrower than today. Several drivers joined the protest and vacated their cars on the starting grid, which proved to be a bit of a problem when the organisers decided to start the formation lap anyway at the scheduled time…

With several cars stuck on the grid, second-placed Nelson Piquet caused a further delay when he echoed Villeneuve’s mistake in Long Beach and missed his grid spot. The Brazilian was sent round again and had to weave his way past his colleagues on the cramped grid. Because of the long wait several cars struggled with overheating engines. Arrows driver Riccardo Patrese wildly gesticulated on the grid, asking for assistance. His mechanic Dave Luckett jumped to his aid, assuming the field would be first sent on another formation lap. As it happened, the organisers started the race as soon as Piquet had taken his proper grid spot, with Luckett still tending to the Arrows. Several cars managed to take avoiding action, but eventually the unfortunate mechanic was struck by the second Arrows of Siegfried Stohr. Luckett broke a leg in the incident, but made a full recovery.

The events at Zolder triggered safety improvements to the starting procedure. Mechanics were no longer allowed on the grid 15 seconds before the start of the race. 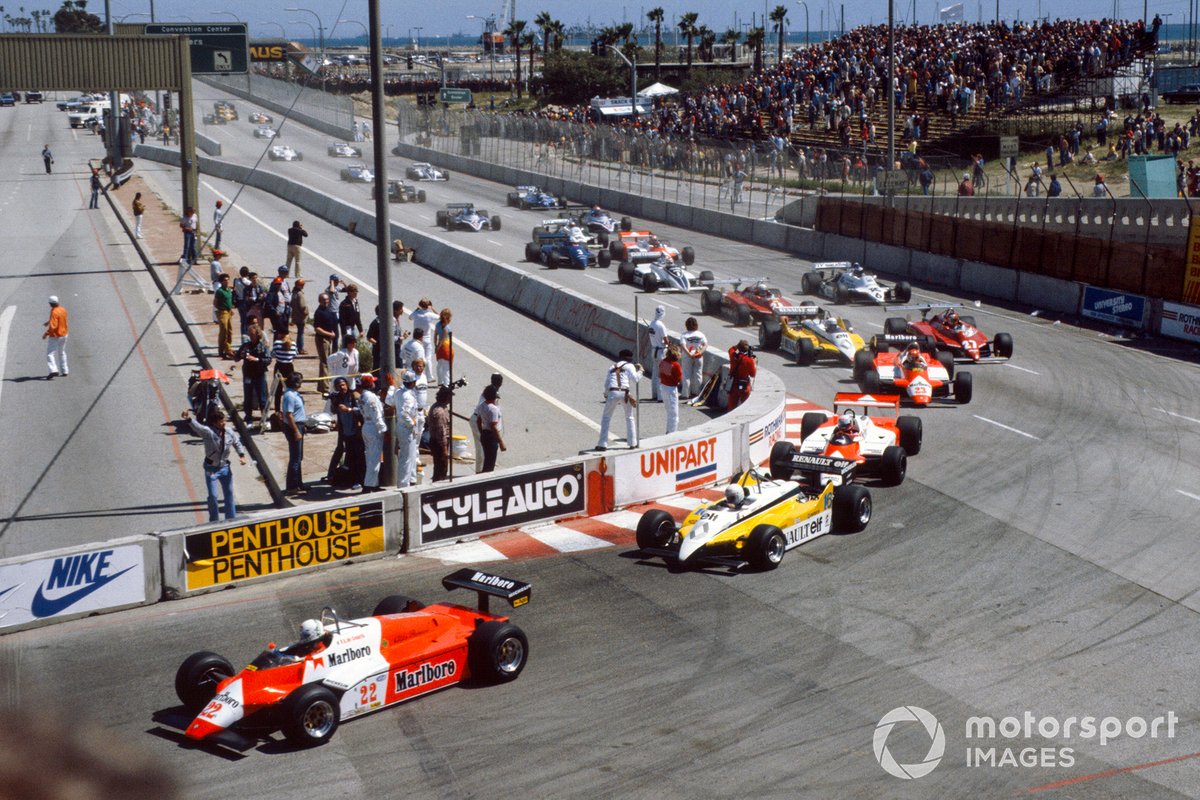 Long Beach was the scene of another starting grid mishap in 1982. Coming onto the grid, Lotus driver Elio de Angelis parked in the wrong spot. De Angelis, realising his mistake, put his car in reverse and backed into his team-mate Nigel Mansell. Mansell also reversed to try and avoid further damage. Suddenly the green light came on, giving the Briton the dubious honour of starting a motor race in reverse.

Needless to say the Lotus pair fell a long way behind. Due to the typically high attrition rate around Long Beach, De Angelis still managed to salvage two points in fifth - albeit one lap behind. Mansell missed out by finishing seventh, two laps behind winner Niki Lauda. 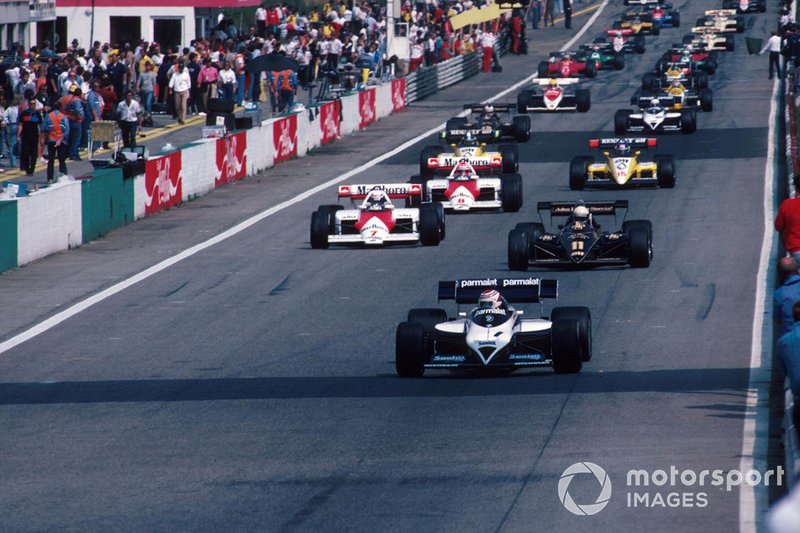 In a year where McLaren was dominant with its TAG Porsche turbo engines, Niki Lauda took an important step towards his third world title after winning his home grand prix. The 400th F1 Grand Prix got off to a chaotic start, however.

Due to a problem with the start lights, which went from red to green and back to red, third-placed Elio de Angelis hesitated to get going, holding up Patrick Tambay and Teo Fabi behind him. There was no hesitation on the other side of the grid, with Ayrton Senna vaulting up the order from tenth to fourth in his Toleman.

The races was red-flagged and it was soon decided to restart the race from scratch after another formation lap. This time polesitter Piquet held off Prost. The race - and the championship - took a huge twist when Prost crashed out on an oil patch and Lauda overtook Piquet for the lead. In the closing stages the Lauda was about to retire with a gearbox problem. The Austrian ultimately decided to keep going and skip fourth gear, and managed to score a dramatic home win. 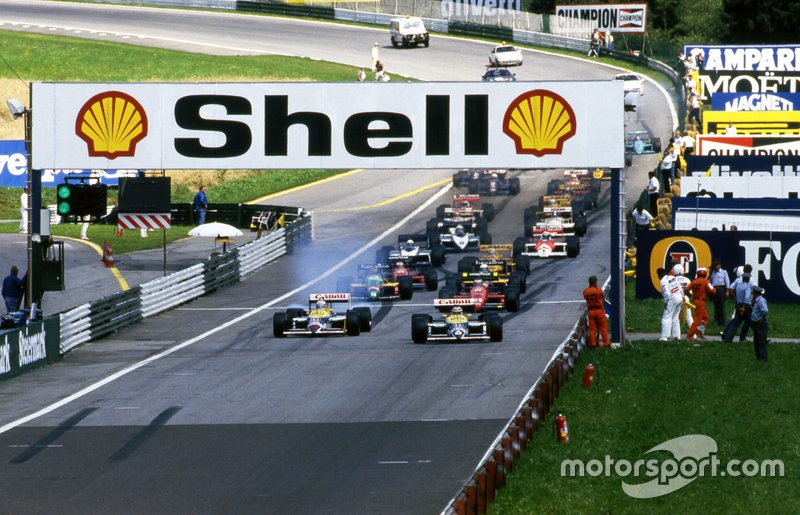 While the 1984 Austrian Grand Prix took two attempts the start the race, the 1987 edition of the race on the same Osterreichring trumped it with three starts. A crash by Martin Brundle’s Zakspeed caused a multi-car pile-up on the original start and brought out the red flag.

The restart, however, was arguably even worse. Nigel Mansell got off the line slowly in his Williams, which suffered clutch problems, and triggered mayhem behind him. As many as twelve cars were involved in the ensuing melee, including the likes of Riccardo Patrese, Eddie Cheever, Stefan Johansson and Ivan Capelli.

Teams were given a chance to repair the damage or prepare spare cars for a third start, which ran two hours late. Philippe Streiff was missing as Tyrrell had run out of chassis. Several other drivers started from the pitlane. Brundle, who was involved in both pile-ups, was rushed out with improvised bodywork on his Zakspeed and was ultimately disqualified for it. Mansell, who was lucky not to be collected at the second start, ended up winning the race by nearly a minute over Williams teammate Piquet. 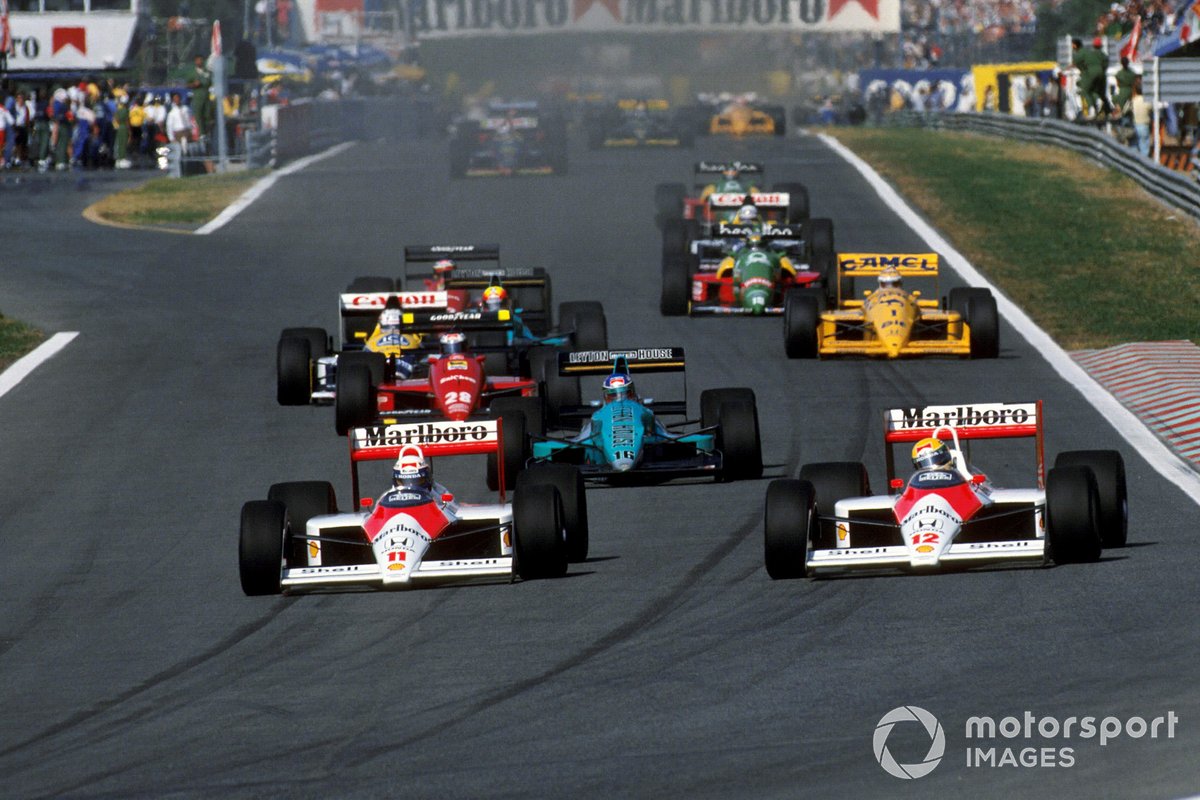 In the days before anti-stall, the 1988 Portuguese Grand Prix was another race that took three attempts to get going. The first start was called off when Andrea de Cesaris stalled his Rial. Derek Warwick ground to a halt on the second start and was hit by De Cesaris, Luis Perez-Sala and Satoru Nakajima.

The third attempt proved to be the right one. Ayrton Senna swept past his McLaren team-mate and rival Alain Prost to take the lead into Turn One. Prost returned the favour as they came round to start the second lap. Senna famously pushed Prost towards the pit wall, but was unable to prevent the Frenchman from retaking the lead. Capelli played a starring role in the March, passing Senna for second as the Brazilian was struggling with an erroneous fuel indicator. In the 13th grand prix of the season, it happened to be the first time a dominant McLaren-Honda was passed on track. Capelli secured second behind Prost and well ahead of Thierry Boutsen’s Benetton. 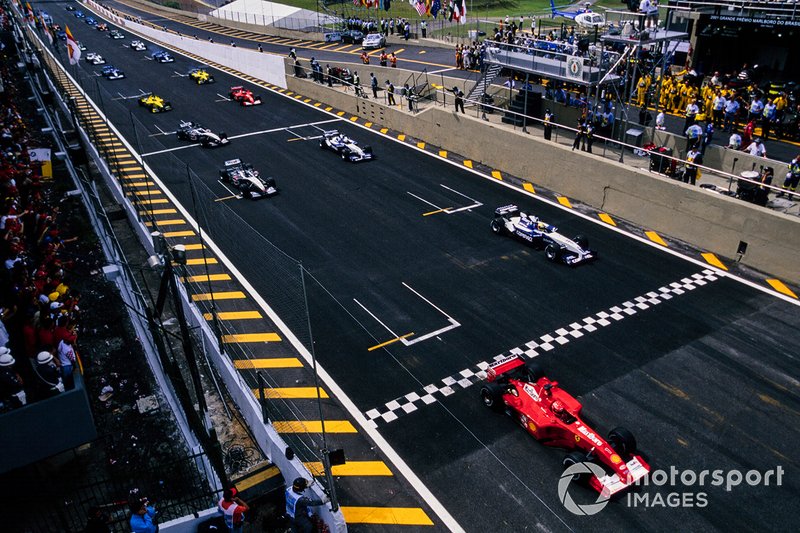 With the advent of the safety car, red flagging a race because of a single grid stall is a thing of the past. One of the most famous examples is Mika Hakkinen’s stall at the 2001 Brazilian Grand Prix. Hakkinen frantically waved his arms on the starting grid as his McLaren shut down. Fortunately, his competitors managed to safely avoid the Finn.

After a brief safety car intervention the ensuing flying restart provided one of the standout moments of the season as rookie Juan Pablo Montoya muscled his way past the leading Ferrari of Michael Schumacher. 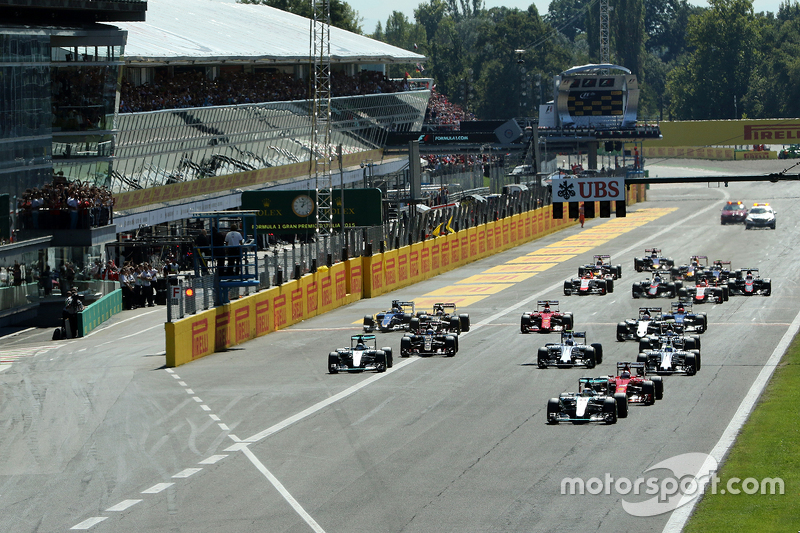 Thanks to technological developments and other reliability improvements, hard grid stalls have fortunately become a rare occurrence in the modern era. One of the most recent examples was Kimi Raikkonen’s scare at the start of the 2015 Italian Grand Prix. Raikkonen had secured a front row start in front of the Ferrari tifosi, but the Finn’s car went into anti-stall at the start. That did enable Raikkonen to get going, but he was swarmed by the rest of the pack as he slowly crept off the line.

In the hybrid era drivers have more options in case their engine fails to play ball. At the 2016 Malaysian Grand Prix, Carlos Sainz managed to restart his engine on the grid using his MGU-K system. If anything, this list displays the technological evolution of the sport, as well as the numerous safety improvements throughout the years. From mechanics being put in harm’s way all the way to a driver restarting a dead engine using hybrid power - the chances of suffering chaos on the starting grid have thankfully been dramatically reduced.

Gasly: AlphaTauri can fight McLaren, Ferrari on all tracks