May 25 (GMM) Kimi Raikkonen is paying tribute to one of his heroes this weekend at Monaco. 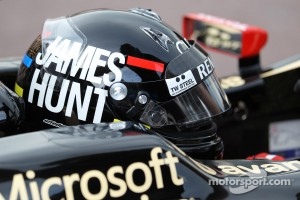 During Thursday practice for this weekend's blue-riband event, onlookers were surprised to see the late James Hunt apparently at the wheel of a 2012 black and gold Lotus.

In 32-year-old Raikkonen's championship year in 2007, he famously entered a snowmobile race under the name 'James Hunt'.

Raikkonen has admitted to identifying with the carefree Briton, who once said after winning a Grand Prix: "9 points, $20,000 and a lot of happiness -- can I grab that cigarette?"

The former BBC commentator, who died aged 45 in 1993, also wore a logo on his overalls with the words: "Sex: breakfast of champions".

Asked about the tribute on Thursday, Raikkonen insisted: "It's not for any particular reason.

"I just like him and the kind of racing there was in the past," he is quoted by the Finnish broadcaster MTV3.

Schumacher must convince Mercedes to 'want him'